How much does it cost to travel to Trogir?

How much money will you need for your trip to Trogir? You should plan to spend around kn623 ($89) per day on your vacation in Trogir, which is the average daily price based on the expenses of other visitors. Past travelers have spent, on average, kn198 ($28) on meals for one day and kn89 ($13) on local transportation. Also, the average hotel price in Trogir for a couple is kn689 ($98). So, a trip to Trogir for two people for one week costs on average kn8,727 ($1,239). All of these average travel prices have been collected from other travelers to help you plan your own travel budget.

A vacation to Trogir for one week usually costs around kn4,364 for one person. So, a trip to Trogir for two people costs around kn8,727 for one week. A trip for two weeks for two people costs kn17,454 in Trogir. If you're traveling as a family of three or four people, the price person often goes down because kid's tickets are cheaper and hotel rooms can be shared. If you travel slower over a longer period of time then your daily budget will also go down. Two people traveling together for one month in Trogir can often have a lower daily budget per person than one person traveling alone for one week.


How expensive is Trogir? How much money do I need for Trogir?

How much does a trip to Trogir cost? Is Trogir expensive? The average Trogir trip cost is broken down by category here. All of these Trogir prices are calculated from the budgets of real travelers.

Looking for a hotel in Trogir? Prices vary by location, date, season, and the level of luxury. See below for options.

How much does it cost to go to Trogir? Naturally, it depends on the dates. We recommend Kayak because they can find the best deals across all airlines.

The price of renting a car in Trogir will depends on dates, the type of car, the location, and your age. We recommend Kayak because they can find the best deals across all car rental companies.

The Best Hostels in Trogir, CroatiaSplitHvarZagrebRijekaZadar

Trogir On a Budget 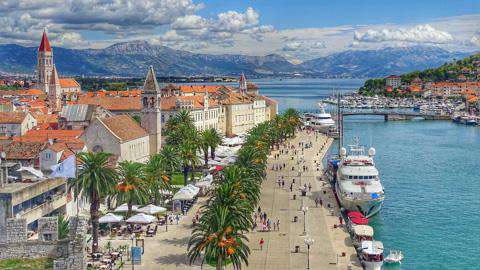 Trogir, Croatia
Trogir is a town set within partially intact medieval walls on the central Adriatic coast of Croatia. Its preserved old town, known for its mix of Renaissance, Baroque, and Romanesque buildings, lies on a small island connected to the mainland and the island of Ciovo by bridges. The 13th-century Cathedral of St. Lawrence houses the Renaissance Chapel of St. John and offers sweeping views from its bell tower. On summer nights everyone gravitates to the wide seaside promenade, lined with bars, cafes and yachts - leaving the knotted maze-like marble streets gleaming under old-fashioned streetlights. In 1997 its profuse collection of Romanesque and Renaissance buildings earned it World Heritage status. While it's easily reached on a day trip from Split, Trogir also makes a good alternative base to the big city and a relaxing place to spend a few days.

Sightseeing in Trogir is a joy. It's a small town and Trogir's sights are conveniently clustered together, making it an easy walk and easy to understand why it is a UNESCO World Heritage Site.

The magnificent cathedral of St Lovro, built from the 13th to the 15th centuries and considered one of the Adriatic's most architecturally and artistically important monuments. It represents the first example in Dalmatia of the Gothic style that was sweeping continental Europe. The significance of this work is how the Romanesque structure of the portal encloses the Gothic tendency to humanize the Biblical story it depicts. Notice the central scene of the tympanum in which Radovan conveys the Madonna's intimate relationship with the child by showing her uncovering the face of the infant. Beneath, Christ is depicted as a normal baby resisting the women bathing him. Perhaps the most striking figures are the freestanding sculptures of Adam and Eve in which he achieves a remarkable fluidity in the human figures he molded. Adam and Eve are depicted nude--a first in Dalmatian sculpture. The interior of the Cathedral is no less astonishing than the exterior. The Chapel of Blessed John Orsini is a Renaissance masterpiece. Although it took four decades to complete, the freestanding sculptures of Christ and the twelve apostles topping a basamento of nineteen energetic putti are remarkable of the harmony of the whole and the humanism of the individual pieces.

The east side of the town square is devoted to two palaces: the "Old" Cipiko palace is the smaller and displays a beautiful triforium. The "New" Cipiko palace has late-Gothic triforia on the first and second floors. Also on the east side of town, don't miss the church of St John the Baptist, dating from the 13th century with a magnificent portal and bell tower.

On the waterfront is the imposing Kamerlengo fortress which used to be connected to the city walls. It was built by the Genoans in the 14th century and in 1941 it was the site of a massacre of locals by the Fascist occupiers. A memorial plaque notes the event.

A pleasing blend of Romanesque and Renaissance architecture, Trogir boasts a spectacular Venetian Cathedral of St. Lovro, a 15th-century town hall, the Church of St. John the Baptist with its gorgeous carved portal. Trogir is a delightful little town that is conveniently located to explore Central Dalmatia.

Just a short drive away, visitors may explore the intriguing city of Split with its busy commercial port, residential houses, shops and restaurants all rising from the incredible ruins of Diocletian's Palace. The ancient ruins of the Roman city of Solin are also just a short drive away from Trogir and make an extraordinary day trip.

About 3km from Trogir, on the island of Ciovo (connected by the bridge) is a town called Okrug Gornji. It has 1km long beach with lots of bars right next to sea. If you like having a drink on a beach, jumping in the sea from the bar or a good night out then this is the place for you.

Trogir
Trogir is a jewel of a town encased in 15th-century walls. Tiny medieval streets wind through the enchanting town revealing hidden restaurants and eye-catching galleries. A wide seaside promenade snakes around the town, culminating in a charming port full of sailboats waiting to take you to the islands of Drvenik Mali and Drvenik Veli with their pristine sand beaches and secluded coves. Stretching out from the main land of Trogir to either side is an infinite number of beautiful beaches as well.

Ciovo
Ciovo island (really an extension of Trogir) is green and plush. The Mediterranean vegetation ends in small sand and pebble beaches on the western side. If you stay in Trogir you can combine sightseeing in the Old Town with beach days on Ciovo or you can take a boat to the unspoiled offshore islands of Drvenik Mali and Drvenik Veli.

Charter your own boat. Right on the Riva embankment by Kamerlengo fortress, Filip's Marina is the setting-off point for charter boats and all-day sightseeing trips to Maslinica on Solta and Krknjasi on Drvenik Veli, with swimming, a picnic lunch and wine available. Also available is the Princess Mercy, a three-cabin, 14-metre boat equipped with air-conditioning, a TV and cooking facilities, which can be chartered or reserved with your own captain.

Swim amid colorful coral. Great diving sites are located nearby and provide an exciting adventure. Some of the best sites are found around the island of Solta. The abundant coral and sponges here offer divers a rich diversity of flora and fauna to explore, along with conger eels, octopuses, and lobsters. The plethora of local sites also allows available diving trips for all levels.

Scale a medieval fortress! Standing guard over the south-west corner of Trogir island, Kamerlengo was built by the Venetians in the 1400s after the conquest of Constantinople and the increasing threat from the Turks. Given its potential importance, Kamerlengo is surprisingly small, but ascending it gives superb views of Trogir's watery surroundings. Looking back, you also get a wonderful panorama of Trogir's historic center. Kamerlengo is used in summer for outdoor shows and performances, even open-air cinema screenings.

As can be expected, authentic Trogir dishes are oriented to sea food. That means that the food is easy to prepare, light and healthy. The secret of the fabulous taste of fish, meat, or other cooked Trogir Gastronomy dishes lies in its simplicity. Yet the idea that simplicity means everyone everywhere could prepare them would be deceiving. The tradition of grilling and roasting fish and delicacies of the sea in this region has been carried on from generation to generation, whereby the proper grilling technique often depends on the type of wood or wood briquettes chosen to do the grilling. In addition to this come the tantalizing Dalmatian olive oil, grilling technique, and the particular taste of the fish and delicacies of the sea. This is what leaves every guest, once they have tried it, with unforgettable memories to take back home. Famous Trogir specialties include dishes like: mussels, shrimp (scampi), roast fish, delicious fish stew with rice, and meat specialties like sour marinated beef (pasticada) with noodles (njoki).

Trogir is advantageously located near the Split airport, and there's a frequent city bus from Split that runs to Trogir. The Trogir bus station is in front of town across a canal. There's also a daily catamaran between Split and Trogir that runs from late spring to early autumn. The old part of Trogir occupies an island which you can walk around in about 20 minutes, so getting around once in Trogir is easy.