How much does it cost to travel to Karlovy Vary?

How much money will you need for your trip to Karlovy Vary? You should plan to spend around Kč1,538 ($66) per day on your vacation in Karlovy Vary, which is the average daily price based on the expenses of other visitors. Past travelers have spent, on average, Kč499 ($21) on meals for one day and Kč494 ($21) on local transportation. Also, the average hotel price in Karlovy Vary for a couple is Kč1,473 ($63). So, a trip to Karlovy Vary for two people for one week costs on average Kč21,531 ($919). All of these average travel prices have been collected from other travelers to help you plan your own travel budget.

A vacation to Karlovy Vary for one week usually costs around Kč10,765 for one person. So, a trip to Karlovy Vary for two people costs around Kč21,531 for one week. A trip for two weeks for two people costs Kč43,061 in Karlovy Vary. If you're traveling as a family of three or four people, the price person often goes down because kid's tickets are cheaper and hotel rooms can be shared. If you travel slower over a longer period of time then your daily budget will also go down. Two people traveling together for one month in Karlovy Vary can often have a lower daily budget per person than one person traveling alone for one week.

Looking for a hotel in Karlovy Vary? Prices vary by location, date, season, and the level of luxury. See below for options.

How much does it cost to go to Karlovy Vary? Naturally, it depends on the dates. We recommend Kayak because they can find the best deals across all airlines.

The price of renting a car in Karlovy Vary will depends on dates, the type of car, the location, and your age. We recommend Kayak because they can find the best deals across all car rental companies.

Karlovy Vary On a Budget 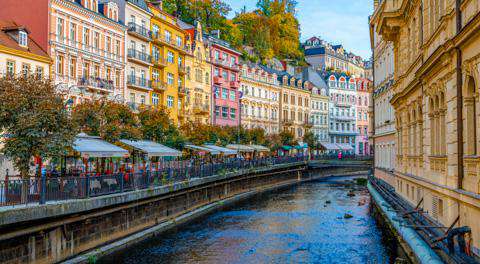 Karlovy Vary, Czech Republic
Founded in 1370, Karlovy Vary translates to "Charles' Bath" for its founder Charles IV, King of Bohemia and Holy Roman Emperor, as well as its famous hot springs. It is located in Bohemia in the western Czech Republic and is also known as Karlsbad (German) or Carlsbad (English). Another highlight is the International Film Festival in July with draws celebrities and other film enthusiasts worldwide.

Karlovy Vary is the largest and most famous spa town in the Czech Republic. Its many thermal springs have made it a popular resort since the 19th century where visitors come to experience natural spa treatments and drinking remedies from the mineral waters of the springs. This riverside spa district is also home to several colonnades with columned walkways. The more recent Hot Spring Colonnade, built in the lates 1960s, houses the Pramen Vridlo geyser which spouts up to 12 meters high, yielding an average of 2000 liters of mineral water per minute for the surrounding spas. Other colonnades include the Mill Colonnade which protects a number of hot springs including Rusalka Spring, the Park Colonnade which adorns Dvorak Park and dates from the year 1800, and the Market Colonnade which has been preserved and reconstructed for more than one hundred years.

The city is also home to a number of churches as well as sites of cultural and historical significance. Churches include the baroque Church of St. Mary Magdalene from 1757 which was built on the site of a former Gothic church, and the St. Peter and St. Paul Orthodox Church from 1898 which is richly decorated and modeled after a church near Moscow. Other important sites include the Elizabeth Spa (the largest in the Czech Republic), The Municipal Theatre which was designed by Viennese architects Fellner and Helmer, and the Diana Observation Tower which offers striking views of Karlovy Vary, the peaks of Krusne (Ore) Mountains, Doupovske Mountains, and the Slavkov Forest.

The Historicka ctvrt (Historic District) is the most scenic part of the city. Tall 19th-century houses, with decorative and often eccentric facades, painted in whimsical colors, line the spa's riverside streets. The area features a collection of colonnades, described above, which protect the many thermal springs for visitors.

Beyond spa treatments and other natural remedies, Karlovy Vary is also renowned for its International Film Festival held annually in the month of July. Each year, celebrities and film enthusiasts flock to the city to engage in a festival atmosphere of concerts, parties, ceremonies, press conferences, and more than 200 film showings from all over the world.

Aside from this one week in July, Karlovy Vary is a very peaceful escape. There are also a number of museums and galleries, as well as tours available to see nearby historic sites like Becov Castle and Chateau or the Jachymov Spa.

Czech cuisine makes up the traditional fare of the general area. A Czech meal will typically consist of two or more main courses, with the first being soup and the second being the main dish. Thick soups and many kinds of sauces are especially popular. These are both based on stewed or cooked vegetables and meats, often with cream, as well as baked meats with natural gravies. A third course might sometimes consist of dessert or fruit compote. A mainstay of Czech side dishes is the dumpling - usually sliced, potato-based, filled with smoked meat, and served with spinach or sour cabbage. Other side dishes include noodles, boiled or risotto rice sometimes made into a kind of pudding, boiled potatoes, mashed potatoes, and French fries or croquettes. As far as the main course goes, pork is the most common meat though beef, veal, and chicken are also found. These can be cooked into stews, marinated, stuffed into dumplings, minced and baked, or smoked. One particular specialty of Karlovy Vary is the spa wafer, which is best served warm and comes in a variety of flavors. The wafers are sold at street stands in the city and in grocery stores all over the Czech Republic.

By plane, the nearest major airport is in the Czech capital of Prague which offers international flights and serves as the hub for Czech Airlines. From Prague, Karlovy Vary can be reached by train or bus. By bus, routes run hourly to and from Prague's Florenc and Dejvicka stations between 5:00am and 8:00pm for a journey taking about 2 hours. By train, routes from Prague leave Prague Main Station every 2 hours and arrive at Horni nadrazi in Karlovy Vary just over 3 hours later.