How much does it cost to travel to Plzen?

How much money will you need for your trip to Plzen? You should plan to spend around Kč1,929 ($82) per day on your vacation in Plzen, which is the average daily price based on the expenses of other visitors. Past travelers have spent, on average, Kč587 ($25) on meals for one day and Kč157 ($6.70) on local transportation. Also, the average hotel price in Plzen for a couple is Kč2,324 ($99). So, a trip to Plzen for two people for one week costs on average Kč26,999 ($1,150). All of these average travel prices have been collected from other travelers to help you plan your own travel budget.

A vacation to Plzen for one week usually costs around Kč13,500 for one person. So, a trip to Plzen for two people costs around Kč26,999 for one week. A trip for two weeks for two people costs Kč53,998 in Plzen. If you're traveling as a family of three or four people, the price person often goes down because kid's tickets are cheaper and hotel rooms can be shared. If you travel slower over a longer period of time then your daily budget will also go down. Two people traveling together for one month in Plzen can often have a lower daily budget per person than one person traveling alone for one week.


How expensive is Plzen? How much money do I need for Plzen?

How much does a trip to Plzen cost? Is Plzen expensive? The average Plzen trip cost is broken down by category here. All of these Plzen prices are calculated from the budgets of real travelers.

How much do vacation rentals cost in Plzen? Prices vary by location, date, size of the place, and the level of luxury. See below for options.

How much does it cost to go to Plzen? Naturally, it depends on the dates. We recommend Kayak because they can find the best deals across all airlines.

The price of renting a car in Plzen will depends on dates, the type of car, the location, and your age. We recommend Kayak because they can find the best deals across all car rental companies.

Plzen On a Budget 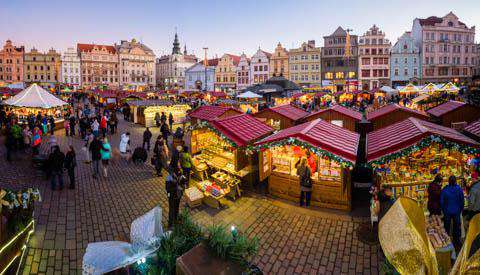 Plzen, Czech Republic
Renowned as the home of the pilsner beer, Plzen is a city located in the West Bohemia region of the Czech Republic. Beyond beer, it also features a number of impressive landmarks some of which include St. Bartholomew's Cathedral and the Great Synagogue.

A visit to the Pilsner Urquell Brewery is an especially popular attraction for those looking to experience the historic home of the original pilsner beer. Established in 1842, the brewery with its brewing cellars and a bottling plant is open for visitors to tour. For those interested in the wine scene, the Bohemia Sekt Winery, located just 10 km outside the city, is the largest Czech Champagne Winery and can be reached by train.

As far as architecture goes, one unique feature to the city's skyline is the Gothic St. Bartholomew's Cathedral, which was founded in the late 13th century. Today its tower is recorded as the highest in the Czech Republic at 335 feet (102.26 meters). Another landmark is the Great Synagogue - the second largest synagogue in Europe and third largest in the world (after synagogues in Jerusalem and Budapest). The Town Hall, built in the mid-16th century, is another Renaissance masterpiece with a structure based on the designs of an Italian architect, Giovanni de Statia. Beneath the entire old town center, there is also a historic network of underground cellars and tunnels which extends up to three levels. It can be accessed from the Brewery Museum on VeleslavÃ­nova Street.

After Prague, Plzen is the second biggest city in Bohemia. The hub of the city is its historical center, where most of the main attractions are concentrated. Some of these features include the monumental Gothic cathedral with the tallest spire in the Czech Republic, the second biggest Synagogue in Europe, several museums and galleries, and a number of beautiful historical buildings. A stroll through the historical center will reveal a charming main square, a variety of local cafes and restaurants, and a number of parks perfect for a serene escape to the greenery of the city.

Admiring Plzen's historical architecture and experiencing its famous pilsner brew are just two of the many activities that the city has to offer. Additionally, many visitors also spend some time at the Plzen Zoo which was founded in 1926 - the second oldest zoo and largest in the country. It is home to more than 1,300 species and over 6,500 individual animals. Species include Indian rhinos, Sudanese cheetahs, Liberian hippos, Komodo dragons, giant tortoises, lemurs, chimpanzees, giraffes, Siberian tigers, snow and Chinese leopards, penguins and many others - each living within a recreation of its own natural habitat. The Techmania Science Center and Puppet Museum also have a variety of activities for all ages, while other museums include the West Bohemian Museum, the Brewery Museum, the Ghost Museum, and the Diocese Museum.

Czech cuisine makes up the traditional fare of the general area. A Czech meal will typically consist of two or more main courses, with the first being soup and the second being the main dish. Thick soups and many kinds of sauces are especially popular. These are both based on stewed or cooked vegetables and meats, often with cream, as well as baked meats with natural gravies. A third course might sometimes consist of dessert or fruit compote. A mainstay of Czech side dishes is the dumpling - usually sliced, potato-based, filled with smoked meat, and served with spinach or sour cabbage. Other side dishes include noodles, boiled or risotto rice sometimes made into a kind of pudding, boiled potatoes, mashed potatoes, and French fries or croquettes. As far as the main course goes, pork is the most common meat though beef, veal, and chicken are also found. These can be cooked into stews, marinated, stuffed into dumplings, minced and baked, or smoked. Also, be sure to try a brew of the famous pilsner beer, named for the city in which it was invented.

By plane, the nearest airport is in the Czech capital of Prague which offers international flights and serves as the hub for Czech Airlines. The airport is about one to one and a half hours northeast of Plzen. From Prague, the best way to reach the city is by bus. Plzen also has direct bus connections to airports in Munich and Frankfurt, Germany.

Another option for travelers is to take a train from Prague to Plzen. The main station in Plzen is just a five minute walk from the city center.