How much does it cost to travel to Porvoo?

How much money will you need for your trip to Porvoo? You should plan to spend around €105 ($114) per day on your vacation in Porvoo, which is the average daily price based on the expenses of other visitors. Past travelers have spent, on average, €24 ($26) on meals for one day and €45 ($48) on local transportation. Also, the average hotel price in Porvoo for a couple is €110 ($119). So, a trip to Porvoo for two people for one week costs on average €1,474 ($1,603). All of these average travel prices have been collected from other travelers to help you plan your own travel budget.

A vacation to Porvoo for one week usually costs around €737 for one person. So, a trip to Porvoo for two people costs around €1,474 for one week. A trip for two weeks for two people costs €2,948 in Porvoo. If you're traveling as a family of three or four people, the price person often goes down because kid's tickets are cheaper and hotel rooms can be shared. If you travel slower over a longer period of time then your daily budget will also go down. Two people traveling together for one month in Porvoo can often have a lower daily budget per person than one person traveling alone for one week.


How expensive is Porvoo? How much money do I need for Porvoo?

How much does a trip to Porvoo cost? Is Porvoo expensive? The average Porvoo trip cost is broken down by category here. All of these Porvoo prices are calculated from the budgets of real travelers.

Looking for a hotel in Porvoo? Prices vary by location, date, season, and the level of luxury. See below for options.

How much does it cost to go to Porvoo? Naturally, it depends on the dates. We recommend Kayak because they can find the best deals across all airlines.

The price of renting a car in Porvoo will depends on dates, the type of car, the location, and your age. We recommend Kayak because they can find the best deals across all car rental companies.

What did other people spend on Food in Porvoo?

Typical prices for Food in Porvoo are listed below. These actual costs are from real travelers and can give you an idea of the prices in Porvoo, but your costs will vary based on your travel style.

Porvoo On a Budget 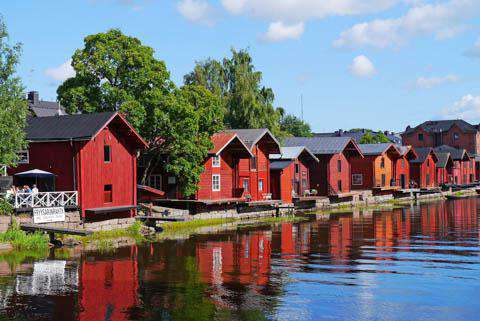 Porvoo, Finland
Porvoo is a city and a municipality situated on the southern coast of Finland approximately 50 kilometers east of Helsinki. Porvoo is one of the six medieval towns in Finland, first mentioned as a city in texts from 14th century. Even though Porvoo is not exactly a coastal town, it is connected to the Gulf of Finland via the Porvoo River. The river flows through the city, passing Porvoo's most well-known landmarks: the red shore houses. Historically, Porvoo has been an important center of trade. Founded nearly 800 years ago, Porvoo is the second oldest city in Finland and evidence of its long history can still be seen and felt as you walk its charming streets. For centuries, the city has served as both a home and a source of inspiration for many Finnish artists.

Porvoo's most well-known symbol and attraction are the lovely red shore houses. Originally, the shore houses were painted red in honor of the arrival of Gustav III, the king of Sweden. They were once used to store merchandise and exotic delicacies from distant lands.

Holm House is also a spectacular place to take in some local culture and sight as it hosts seasonal exhibitions and boasts a stunning flower garden in its yard.

Porvoo Cathedral, located at the heart of Old Porvoo, is one of the city's most well-known buildings. Built at the turn of the 14th century, the cathedral's remarkable history has seen it burn down five times, most recently in an arson attack in 2006. Following the devastation, the cathedral was renovated for two years, finally reopening to the public in 2008. In the foreground of the cathedral is an impressive bell tower.

Porvoo is famed for its Old Town, which is the main neighborhood of interest, a dense medieval street pattern with predominantly wooden houses. The Old Town came close to being demolished in the 19th century by a new urban plan for the city. The plan was cancelled due to a popular resistance headed by Count Louis Sparre.

Take an exciting ride on a vintage 1955 steam train excursion from the Porvoo Museum railway. You can also visit the unique Porvoo Doll and Toy museum, which has over one thousand dolls and hundreds of toys dating from 1800 to 1990. You can also visit the Porvoo museum. It is a History and art museum in the heart of the Old Town, housed in the former City Hall. The Diet of Porvoo was held here, and today it showcases artifacts from peasant life and a collection of old photographs.

Kayaking and canoeing on the Porvoo River and in the nearby island is a popular summer pastime. It's even possible to make your way down all the way from Lahti, 90 km away. The stream is gentle and it's quite suitable for beginners, but don't venture out into the sea unless you know what you're doing.

When it comes to delicacies, Porvoo is definitely one of the best destinations in southern Finland. By the 19th century, people travelled all the way from Helsinki to visit Porvoo's cafes and restaurants. For a few restaurant ideas, try: Leipomo Virtanen, a great bakery with a large variety of food, Gabriel 1763, a nice restaurant with a couple of tables outside, and Wanha Laamanni, a classy restaurant in a building dating back to 1790, now serving up modern fare with a Finnish twist: try the deer carpaccio or tar-flavored salmon.

The closest major airport to Porvoo, Finland is Helsinki-Vantaa Airport (HEL / EFHK). This airport is in Helsinki, Finland and is 50 km from the center of Porvoo, Finland. There is no regular passenger train service to Porvoo, but there are buses from Helsinki's Central Bus Station to Porvoo every 15-30 minutes. It is also possible during certain months to take a cruise boat from Helsinki to Porvoo. Porvoo is easily accessed by car via the E18 expressway east from Helsinki towards Kotka and the Russian border. Porvoo is best explored on foot: the Old Town is compact, many streets pedestrian only and with few cars otherwise, and all main attractions can be easily reached from the bus, ferry or train stations. Parents will, however, probably want to leave the baby carriage at home: the Old Town's streets are cobblestone and the old center is on a hill.