How much does it cost to travel to Galway?

How much money will you need for your trip to Galway? You should plan to spend around €91 ($108) per day on your vacation in Galway, which is the average daily price based on the expenses of other visitors. Past travelers have spent, on average, €22 ($26) on meals for one day and €26 ($31) on local transportation. Also, the average hotel price in Galway for a couple is €94 ($112). So, a trip to Galway for two people for one week costs on average €1,278 ($1,513). All of these average travel prices have been collected from other travelers to help you plan your own travel budget.

A vacation to Galway for one week usually costs around €639 for one person. So, a trip to Galway for two people costs around €1,278 for one week. A trip for two weeks for two people costs €2,556 in Galway. If you're traveling as a family of three or four people, the price person often goes down because kid's tickets are cheaper and hotel rooms can be shared. If you travel slower over a longer period of time then your daily budget will also go down. Two people traveling together for one month in Galway can often have a lower daily budget per person than one person traveling alone for one week.


How expensive is Galway? How much money do I need for Galway?

How much does a trip to Galway cost? Is Galway expensive? The average Galway trip cost is broken down by category here. All of these Galway prices are calculated from the budgets of real travelers.

Find a hostel, guesthouse, or B&B in Galway

Typical prices for Food in Galway are listed below. These actual costs are from real travelers and can give you an idea of the prices in Galway, but your costs will vary based on your travel style.

How much does it cost to go to Galway? Naturally, it depends on the dates. We recommend SkyScanner or Kayak because they can find the best deals across all airlines.

Galway On a Budget

Galway, Ireland
Galway is Ireland's fifth largest city with a population of over 70,000. Located in the province of Connacht, it is typically the first stop for travelers headed into western Ireland. It serves as a gateway for this scenic part of the country, but it truly is a destination in and of itself. The city is pleasantly quaint, and is crisscrossed by lovely pedestrian only streets that are lined with shopping and restaurants. There are also countless museums and galleries to explore. Churches and cathedrals dot the town and are fun to drop by if you're fascinated with architecture.

The climate in Galway is usually damp and temperate. Temperatures range from just above freezing during the winter months to the mid 20's (Celsius) in the summer months. Rain is common year around but snow is quite rare. The city is relatively humid throughout the year as well. Be prepared for sudden temperature changes and always be prepared for a sudden, unexpected shower.

Many people use Galway as a base for exploring West Ireland. The city itself is also worth a visit although there are not as many traditional sightseeing spots as other cities. A visit to Galway is more about enjoying the atmosphere and culture of the area. The sights in the area do include Lynch's Castle on Shop Street, the Spanish Arch, the Galway City Museum, The Cathedral of Our Lady Assumed into Heaven and St Nicholas, the Church of Ireland St. Nicholas' Collegiate Church, the Hall of the Red Earl, the Eglinton Canal, and the pedestrian shopping area near Eyre Square.

Although Galway is quite small, it has some interesting and diverse areas. Most tourists spend the majority of their time in the city center, where you'll find the oldest buildings and the best nightlife. In the Docklands area you'll find some trendy shops and high end apartments. Claddagh is on the other side of the River Corrib. Salthill is on the coast and has a few beaches, resorts, and a large amusement park called Leisureland.

There are also some sprawling suburbs to Galway. On the west side Knocknacarra spreads into the Gaeltacht region and on the east Doughiska and Roscam have begun to develop as recently as the early 2000s. Galway continues to experience significant growth and nearby towns are also feeling the effects.

There are many activities and events that go on around Galway throughout the year. The Town Hall Theatre shows many different plays and musicals. It's also used during the many festivals that Galway hosts. The Galway Atlantaquaria on the Seapoint Promenade is an interesting place to learn more about ocean life. It focuses on the marine life found around the Irish coasts.

Other activities around town include guided cruises of the River and Lough Corrib. These are offered by Corrib Princess on a modern luxury river cruiser. They leave from Woodquay, which is in the middle of the city.

The Galway Arts Festival is one of the most impressive cultural events of the year. It is held for two weeks in July and has many features including music, theatre and exhibitions.

Restaurants are great in Galway, but if you're on a budget it's best to pick up some food at a market. One good option is the supermarket in Eyre Square Center. There's also a Tesco on Headford Road and on weekends there's a great outdoor market that's in Church Lane near the St. Nicholas Church. It's a great place to pick up some local produce and dairy or bread products. You can easily make a lunch out of the cheap crepes and curries available there as well.

Like many Irish cities, Galway also has a vibrant nightlife with many pubs, bars and clubs. Check out the Galway City Pub Guide for recommendations.

You can easily walk around central Galway and hit most of the tourist sights. Pick up a map before you head out and it will save you some hassle. If you get tired of walking you can easily pick up a taxi, but keep in mind that they are often very expensive. Also, avoid bringing your car into the city center because parking can be a true challenge. Local bus networks are operated by Bus Eireann and CityDirect.

There are some interesting parts of the town that are enjoyable to explore on foot. Salthill, which is a popular area, is about a half hours walk from the city center. The Promenade is enjoyable to walk down and begins at the Claddagh and goes to Blackrock. It's a great place to people watch and soak up the local culture as you'll see families walking around and people rollerblading. 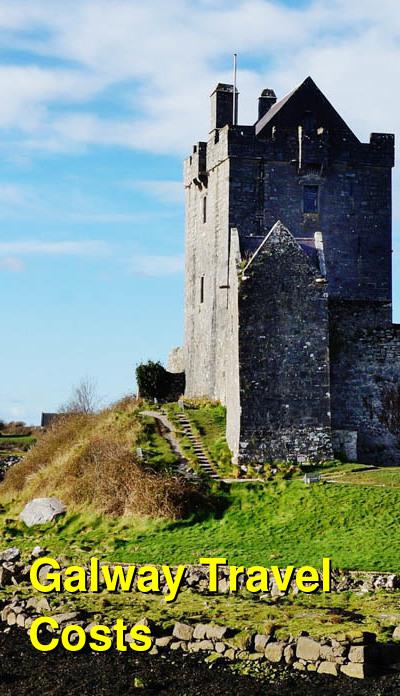 By backpackguru in Food
If you're traveling on a budget you can find some great, affordable places to stock up on food in Galway. There's a supermarket in Eyre Square Center that stays open until 5 pm. There's also a Tesco on Headford Road which is open all day (24 hrs). There's a great outdoor market on weekends between 8 am and 6 pm on Saturdays, and Sundays 2 pm to 6 pm. You can find it beside St. Nicholas Church and it's a great place to find locally grown fruits and vegetables, cheeses, and bread. They also have ready made foods like curries and crepes.