How much does it cost to travel to Kinsale?

How much money will you need for your trip to Kinsale? You should plan to spend around €103 ($108) per day on your vacation in Kinsale, which is the average daily price based on the expenses of other visitors. Past travelers have spent, on average, €37 ($38) on meals for one day and €14 ($14) on local transportation. Also, the average hotel price in Kinsale for a couple is €118 ($123). So, a trip to Kinsale for two people for one week costs on average €1,446 ($1,506). All of these average travel prices have been collected from other travelers to help you plan your own travel budget.

A vacation to Kinsale for one week usually costs around €723 for one person. So, a trip to Kinsale for two people costs around €1,446 for one week. A trip for two weeks for two people costs €2,892 in Kinsale. If you're traveling as a family of three or four people, the price person often goes down because kid's tickets are cheaper and hotel rooms can be shared. If you travel slower over a longer period of time then your daily budget will also go down. Two people traveling together for one month in Kinsale can often have a lower daily budget per person than one person traveling alone for one week.


How expensive is Kinsale? How much money do I need for Kinsale?

How much does a trip to Kinsale cost? Is Kinsale expensive? The average Kinsale trip cost is broken down by category here. All of these Kinsale prices are calculated from the budgets of real travelers.

Looking for a hotel in Kinsale? Prices vary by location, date, season, and the level of luxury. See below for options.

How much does it cost to go to Kinsale? Naturally, it depends on the dates. We recommend Kayak because they can find the best deals across all airlines.

The price of renting a car in Kinsale will depends on dates, the type of car, the location, and your age. We recommend Kayak because they can find the best deals across all car rental companies.

Kinsale On a Budget 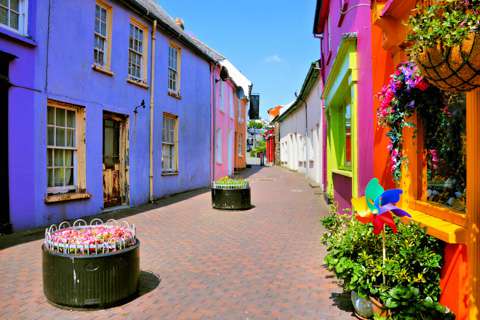 Kinsale, Ireland
Near the River Bandon you'll find the small town of Kinsale, also known as Cionn tSaile. It sits comfortably in the hills that separate it from the nearby ocean. It's a quaint town that is also a historic port. Today is remains popular as a travel destination for sailors and travelers.

The town has two forts that protected it from invasion and served as the site for one of the most important battles in Irish history, in 1601. During this battle the Irish army arrived from the north to defend the town from an English siege. At the time the town was occupied by the Spanish. The Irish lost the battle and this was the defeat that led to the end of the ancient Gaelic aristocracy in Ireland.

Today the town is not only a charming place to visit, but also a great place to enjoy seafood, particularly during the yearly festival.

There are a variety of historic sights around Kinsale. Charles Fort was constructed in the 17th century in the shape of a star. It is well preserved and there are 45 minute tours that leave every hour. It is located a half mile south of the town. James Fort is an older and less maintained fort on Pier Road. It is two miles south of town. Desmond Castle, built in the 1500's by the Earl of Desmond, is a well-preserved tower house. Also swing into the Kinsale Regional Museum, which is small but offers a fascinating look at maritime history in the area.

Kinsale is relatively small and easy to explore. There are also some interesting places just outside of town. Popular beaches in the area include Garretstown and Garrylucas, which are about 8 kilometers away. Another charming town is Cobh, although it doesn't have quite the same character as Kinsale. Also, less than an hour away is the famous castle at Blarney.

If you've seen all the sights around town, then consider taking a sailing trip. This is a popular past time in this area. It's also fun to go whale and dolphin watching which can be a very memorable experience. It's possible to go out on either full or half day trips. Another way to get an interesting take on Kinsale history is to take the ghost tour, which incorporates the area's history with a little bit of fun. There is also a historic tour of Old Kinsale that leaves every day at 11:15 from the tourist office. The tourist information office is found near the main bus stop at the head of the harbor. There you can also pick up free maps and brochures and have any questions that you might have answered.

There are restaurants for every price range in Kinsale. Definitely don't pass up the opportunity to try the area's seafood however, which the town is most famous for. If you're headed to a nicer restaurant, consider making reservations, particularly if you're in town during the peak season and want to eat at a reasonable time. Some recommended restaurants include Jim Edward's Steak & Seafood, Fishy Fishy Cafe, and The Little Skillet.

If you want to grab a beer, then there are plenty of pubs near the center of town. Popular ones include An Seanachai on Main Street, the Tap Tavern, Bulman Bar, and Spaniard Inn.

If you're arriving at the Cork Airport, it is relatively easy to travel from there to Kinsale without a rental car. You can hire a taxi for a reasonable price from the queue outside the front entrance to the terminal. The drive is about half an hour. Alternatively, you can take a bus from either Cork City Center or the airport. Bus Eireann operates the service and it is usually reliable and efficient. There is also a bus service that is run by East Cork Rural Transport, that provides transportation between Kinsale and Bandon.

By backpackguru
Cionn tSaile is the first of what is now a group of Transition Towns. Transition Towns have established community based groups to research, understand, and incorporate sustainability solutions and improved environmental programs. Specifically, they look into things such as peak oil and climate change. Much of there information has included the Kinsale Energy Descent Action Plan 2021. There are meetings on the third Thursday of every month that are open to the public for those that are interested.

By backpackguru
Most people head to Cionn tSaile in the summer when the weather is nice and the restaurants are open and selling up some delicious fare. The small town actually has a lot to offer in the way of food, culture, castles, and the beach. If you want to avoid the crowds you can come during the shoulder season. Less things may be open, but you'll get a true feel for the atmosphere of the beautiful and lovely small town. There's a lot of history that can still be seen in the town's architecture and vibe.