How much does it cost to travel to Isla de Ometepe?

How much money will you need for your trip to Isla de Ometepe? You should plan to spend around C$1,012 ($28) per day on your vacation in Isla de Ometepe, which is the average daily price based on the expenses of other visitors. Past travelers have spent, on average, C$369 ($10) on meals for one day and C$337 ($9.36) on local transportation. Also, the average hotel price in Isla de Ometepe for a couple is C$754 ($21). So, a trip to Isla de Ometepe for two people for one week costs on average C$14,164 ($393). All of these average travel prices have been collected from other travelers to help you plan your own travel budget.

Looking for a hotel in Isla de Ometepe? Prices vary by location, date, season, and the level of luxury. See below for options.

How much does it cost to go to Isla de Ometepe? Naturally, it depends on the dates. We recommend Kayak because they can find the best deals across all airlines.

The price of renting a car in Isla de Ometepe will depends on dates, the type of car, the location, and your age. We recommend Kayak because they can find the best deals across all car rental companies.

Isla de Ometepe On a Budget 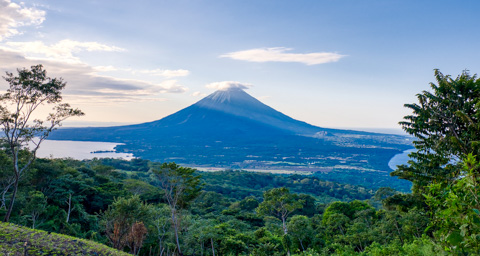 Ometepe Island
Ometepe is a dramatically beautiful island in Lake Nicaragua in the country of Nicaragua. The island is the largest in the lake and is formed by two dramatic twin volcanoes that climb high from the water's surface. The two volcanoes are Concepcion and Maderas, and they are joined by an isthmus to make one island with an area of 276 square kilometers. The island is 31 kilometers long and between 5 and 10 kilometers wide. There are several small settlements on the island as well as a few coffee plantations. It is also one of the top sights in the country and makes for a unique travel destination.

Ometepe is a beautiful island with stunning natural scenery. There is some interesting wildlife on the island including a large population of the white-faced Capuchin monkey. There are also populations of the mantled howler monkey and smaller populations of spider monkeys.

There are interesting petroglyphs found on the island that were noted during the Ometepe Petroglyph Project, which ran between 1995 and 1999. Of the 73 sites surveyed during the project, petroglyphs were recorded on all but one.

The main town on the island is Moyogalpa, which is the harbor village, and your likely point of arrival if you travel to Ometepe by ferry. There are a handful of hotels and restaurants around town, and this town can serve as a good base during your visit to the island.

Altagracia is the second largest town on the island and is located on the eastern side. The town has a cathedral that was built in 1924 as well as the Museum of Ometepe that has a collection of archaeological and ethnographic items.

On the southeastern coast you'll find the town of Merida, while the town of Balgue is on the southwestern coast. Santo Domingo is just past the isthmus on the Maderas side. This town has a few affordable hotels and restaurants, as well as a black sand beach. Santa Cruz is about an hour by taxi from Moyogalpa on the Maderas side. This is a small village that has gained popularity with backpackers and has a few hostels.

Food options are somewhat limited on the island, but you will find a handful of restaurants that cater specifically to tourists. Most restaurants offer some form of grilled or fried fish, as well as tacos and fresh fruit. Spaghetti is also commonplace around the island, although the quality is highly variable. Pizza is also relatively easy to find. Vegetarian dishes are available at a handful of restaurants as well. Comida Corriente is the most budget friendly option. This traditional dish usually includes rice, beans, and some form of meat.

The most practical way to get to Ometepe is to take a ferry from the town of San Jorge, which is near Rivas. The boat takes you to the island's main port in Moyogalpa and the trip will cost you between 2 and 3 dollars. You will likely have to pay a 10 cordoba tax on departure as well. Conveniently, a ferry also leaves from Granada on Mondays and Thursdays. It's about a six hour ride but is reasonably priced and will drop you off in the town of Altagracia.

Once you're on the island you can catch a bus that travels to most towns. It's incredibly slow and circles the island. There are slightly more frequent buses that make the trip between Moyogalpa and Altagracia. Alternatively, you can take a taxi, but prices can be quite expensive. If you are less concerned about money, another fun option is to rent a motorcycle to explore the island. This will give you more freedom and flexibility.

Touring the Island of Ometepe

By backpackguru in Intercity Transportation
Ometepe is an island located in Lake Nicaragua, with two non active volcanos on it. The island has a very remote feel and is a definitely somewhere you have to visit while you're in Nicaragua. A great, cheap way to see the island is to hope on a public bus that circles the entire island. You can catch the buses in the islands main town, Moyogalpa. The buses can travel quite slowly, but they are generally very frequent. They pass through some interesting towns and it's a great way to get a feel for the local culture and vibe. It's also an easy way to get to the islands second largest town, Altagracia.

If you have a little more money, and less time you can hire a taxi to take you around. Plan your trip at sunset and you'll get the best views with the most dramatic light. Partner up with a few other travelers and you can save some money. Many taxi drivers also function as guides so they'll tell you the best places to see and most interesting things to do.