Suggested Itineraries for South Korea - On Your Own

Not sure where to go? Try one of these common itineraries to take on your own, or mix and match destinations to plan your own independent trip. 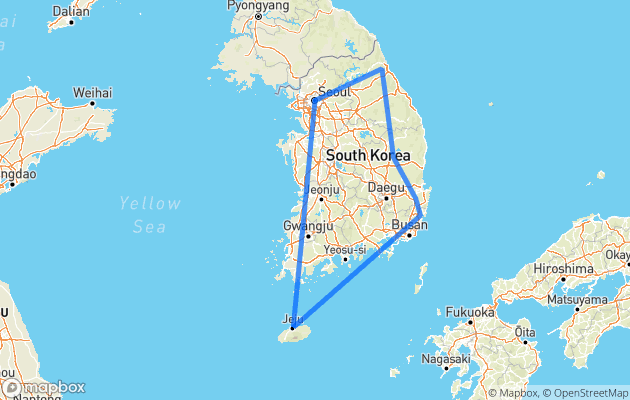 Seoul - Mount Seoraksan - Andong - Kyongju - Ulsan - Cheju (Jeju) - Seoul
Most people start and end their South Korean trips in the vibrant city of Seoul. The large Incheon International Airport has connections all over the globe and is by far the easiest arrival and departure point. It's a good idea to give yourself a day or two to explore Seoul while you adjust to jetlag, and then another few days at the end of your trip so you can take in the sites you may have missed earlier. Places such as the Korean Folk Village in Yongin, Hwaseong Fortress, Changdeokgung Palace, and Bukchon Hanok Village are all worth a visit over the course of several days. If you're interested in shopping, also go to Namdaemun Market, which is a very unique open air market.

Also make sure you give yourself the better part of a day to visit the Demilitarized Zone. This zone has divided North and South Korea since the Korean War ended in 1953. While you're there, visit Imjingak Park, Freedom Bridge, the Third Infiltration Tunnel, Dora Observatory and Dorasan Station.

After a few days in Seoul, head to Mt Seoraksan where you can enjoy the unusual rock formations and emerald pine forests. You can catch a cable car to Gwonkeumsansun Fortress and see the Shinheungsa Temple, which is believed to be the oldest Zen temple in the world.

The next morning travel on to Andong and enjoy a "Hanok Stay" which involves spending the night in a traditional Korean house. These houses are decorated with antique Korean furniture and you can experience various aspects of the Korean lifestyle. Andong Hahoe Village is one of the most well-preserved Korean villages.

Spend time in Gyeongju, which is the former seat of the Silla Dynasty. This area is all about culture and you can explore countless temples and see numerous Buddhist relics. From there, get an early start the next morning and make your way to the nearest domestic airport in Ulsan, about two hours away. Catch a flight on Jeju Air to the Jeju Airport.

Jeju Island offers visitors a secluded, tropical environment. It is popular with Korean honeymooners as well as international travelers. Make sure you take time to visit the World Heritage Seongsan Ilchulbong "Sunrise Peak". There you can climb the steep sides of the island's largest volcanic rock cone to the crater. Other interesting sites worth visiting include Seongeup Folk Village, Udo Island, Oreum (a parasitic volcano), and Bijarim (an oriental nutmeg forest). After spending some time exploring Jeju Island, hop on a plane back to Seoul and wrap up your trip in the city.

2. Off the Beaten Path South Korea 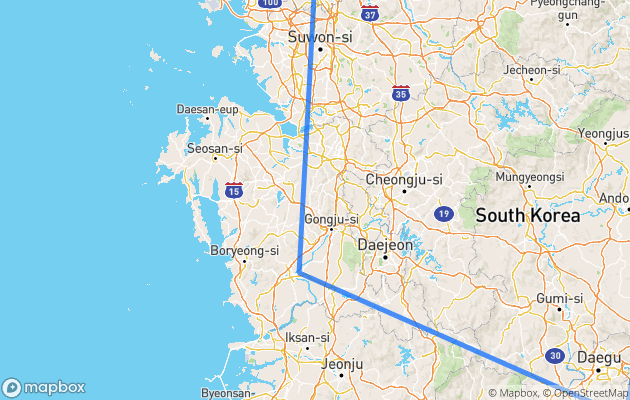 Seoul - Puyo - Hongdo - Tonghae - Matsu-sima - Seoul
Like most trips to South Korea, begin and end your holiday in Seoul. Spend a few days exploring some of the more unique and off the beaten path destinations within the

city. No matter how many times you've been to Seoul, it's unlikely that you've seen everything that this city has to offer. From Seoul, head to Buyeo. Buyeo was once

the capital of the Baekje kingdom, but it is now a quiet and welcoming town that offers you the opportunity to experience everyday life in South Korea. If you're

From Buyeo, make your way to Dadohae Haesang National Park. You'll find this marine park, which includes over 1700 islands, in the southwestern corner of the

peninsula. The two most popular islands to visit are Hongdo and Heuksando. Heuksando is flatter and more crowded, while Hongdo offers dramatic cliffs, rock formations,

From there head to the Samcheok Beaches, which are situated between steep cliffs and dramatic rocks. If you're looking for the best scenery go to Geundeok Beach, while

Yonghwa Beach has plenty of accommodation available in private houses. Imwon Beach is smaller but also offers a dramatic settting with sea caves and cliffs.

Finally, head to Ulleungdo Island which is made up of a now extinct volcano. It's located in the East Sea (Sea of Japan) and offers forested mountains, steep cliffs

and scuba diving opportunities for those who are advanced in their skill level. Don't go to this island looking for sandy beaches, however, as they are few and far

Traveling off the beaten path to some of these more remote destinations can be time consuming and more challenging. Depending on where you decide to go, plane flights

or rental cars could get expensive. Make sure you allow for these additional costs, and the time involved as you budget and plan your trip.