New York City is full of reasons to visit. It is the epicenter of the arts, the dining and shopping capital, and a trendsetter. New York City wears many crowns and spreads an irresistible feast for all. The Met, MoMA, and the Guggenheim are just the beginning of a dizzying list of art-world art museum icons. You'll find museums devoted to everything from fin de siecle Vienna to immigrant life in the Lower East Side, and sprawling galleries filled with Japanese sculpture, postmodern American painting, Himalayan textiles, and New York City lore.

And the nightlife in New York can't be beat. When the sun sinks slowly beyond the Hudson and luminous skyscrapers light up the night, New York transforms into one grand stage. Well-known actors take to the legendary theaters of Broadway as world-class soloists, dancers and musicians perform at venues large and small across town. Whether high culture or low, New York embraces it all: in-your-face rock shows at Williamsburg dives, lavish opera productions at the Lincoln Center, and everything in between. (And check this out if you're spending

The city has also become a hotbed of seasonal and locally sourced cuisine - with restaurants growing vegetables on roof gardens or their own upstate farms, sourcing meats and seafood from sustainable outfits nearby, and embracing artisanal everything - from coffee roasting and whiskey distilling to chocolate- and cheese-making. Bars have also taken creativity to new heights, with pre-Prohibition-era cocktails served alongside delectable small plates - indeed gastropubs are some of the most creative places to get a meal these days. Of course, you can also hit the gourmet food-truck scene or dine more traditionally at one of NYC's 20,000-plus sit-down restaurants.

With so many options, here are a few ideas to help you get started for your trip to New York City. With your tickets to the iconic, world-famous Empire State Building you will get an unparalleled 360-degree view of New York City. In addition to the two indoor/outdoor observation decks, enjoy access to the Dare to Dream exhibit, the new Sustainability exhibit, and an informative new multimedia app available for download. Just stepping into the lobby of the Empire State Building is an experience all on its own. This historic landmark has been restored with stunning Art Deco ceiling murals, and above the front desk is one of the most famous images anywhere in New York City, a depiction of the building itself with beams of light radiating from the mast.

An elevator ride to the 80th floor presents the Dare to Dream exhibit that captures the building's history, engineering and construction work. See period photographs, architectural sketches, construction notes and more, all paying tribute to the more than 3,400 workers who helped to create this building. The final elevator ride arrives at the 86th-floor Main Deck and the highest open-air observatory in New York. This is the center of it all. Enjoy 360-degree views of New York and beyond - Central Park, the Hudson River, the Brooklyn Bridge, Times Square, the Statue of Liberty and so much more.

Visit the iconic locations of 'Sex and the City' on this action-packed guided tour. See where they bought cupcakes and sex toys. Stop by the bars where Charlotte, Carrie, Miranda and Samantha sipped cosmos and gossiped about guys. Go to the shops where they bought clothes. You can follow in the footsteps of the show's famous characters, with stops for snapping pictures, shopping and having a drink at a bar featured on the show. This 'Sex and the City' Hot Spots Tour takes you to more than three dozen spots that were featured on the hit HBO show. The guided tours transport you around New York City in a comfortable air-conditioned coach. Locations include: See Carrie's brownstone located in the West Village, Visit the site of Carrie and Big's wedding rehearsal dinner, Browse around The Pleasure Chest, Check out the bar owned by Steve and Aidan, Stroll the cobblestoned streets of the trendy Meatpacking District, a frequent spot for the girls, Stop at a bar used on the show, and see locations from the Sex and the City: The Movie.

In remembrance of the events that took place in New York City on September 11, 2001, take this guided, 1.5-hour tour of the Ground Zero Museum Workshop. Touch and hold Glass from the World Trade Center on the Ground Zero Museum Workshop Tour. To see images and artifacts from 9/11 is one thing, to touch them and to be able to hear their stories is quite another. Do both at the Ground Zero Museum Workshop in remembrance of the tragic events that took place in Lower Manhattan on September 11, 2001. This is not the National September 11 Memorial and Museum near the new Freedom Tower in Lower Manhattan. This award-winning museum is located in the historic Meatpacking District. It lets visitors see what it was like to be on the front lines with FDNY firefighters after the 9/11 attacks and to experience the aftermath at Ground Zero through the lens of official Ground Zero photographer of FDNY, Gary Marlon Suson. See the largest piece of World Trade Center window glass in existence and the Frozen Clock, which is stuck at 10:02 a.m., the precise time the South Tower collapsed. There's the famous Genesis 11 charred Bible page plus a collection of images described as "rare" by the New York Times because they can only be seen at this location. There are also 3-D photo installations that place visitors into the hole that was left at Ground Zero. This kid-friendly museum is a great way for parents to teach their children about the 9/11 attacks in a gentle manner. The museum doesn't focus on the day of the attacks but rather the nine-month recovery effort to locate the many missing victims. A hop-on hop-off New York bus tour allows you to see the city at your own pace and provides easy transportation to top sights. Entertaining tour guides keep you informed when you're on board, and you can hop off and on the distinctive double-decker tour buses when you wish to check out attractions like the Empire State Building and Rockefeller Center. There are several options and combos to choose from when booking: a 48- or 72-hour All Loops (includes the Uptown Loop, Downtown Loop, Brooklyn Loop, Bronx Loop and Night Tour), or upgrade to VIP Pass which includes skip-the-line benefits and greater flexibility with buses or add attractions to your tour. Your hop-on hop-off New York bus tour features pre-recorded commentary in 11 languages, as well as live tour guides to provide assistance and information. The recorded narration includes music and NYC street sounds to keep you entertained while listening to GPS-triggered fun facts about the sights you see from the bus.

Check out other activities in amazing destinations around the world. Hiking Day Trips from Seattle on a BudgetCheap Tours and Things To Do in Charleston, South CarolinaSavannah, Georgia: Cheap Activities and Tours on a Budget

The Best Cheap Tours and Activities in Washington, D.C. 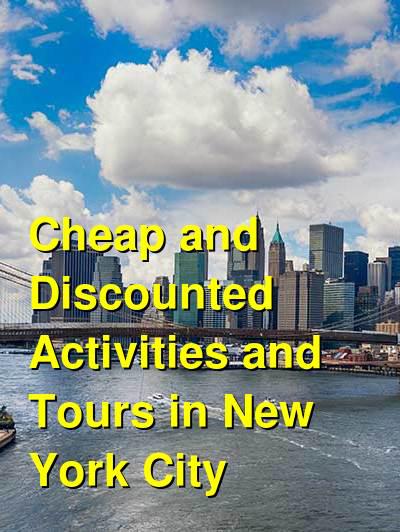