Hiking Day Trips from Seattle on a Budget

A silver city enveloped in a silver sky, the Space Needle radiates a golden glow through the gloom, creating a beacon for travel-wary tourists. Located on the west coast of the United States in King County, Seattle, Washington is the largest city of both the state as well as the Pacific Northwest region. A growing city with a thriving population, Seattle was named the fastest growing city from 2013 onwards. Though an urban honeycomb, Seattle is surrounded by lush evergreen forests, mountains, and water. Seattle is situated at the isthmus between Puget Sound and Lake Washington. As it is a seaport city, it works as a gateway for Asian trade, being the fourth-largest port in North America. Seattle is also a hub for large tech industries, such as Microsoft and Amazon, both companies headquartered in the metropolitan area. Seattle has a fascinating music history, being a jazz center from the 1910s to the 1950s. It has been stated that about two dozen jazz nightclubs were situated on Jackson Street. Because of this flourishing jazz scene, many famous artists like Ray Charles, Quincy Jones, and Ernestine Anderson took flight here. The city is also the birthplace of many famous artists like Jimi Hendrix, Nirvana, and Pearl Jam. Besides its amazing history, the city also has many notable tourist destinations, such as the Space Needle, Pike Place Market, Woodland Park Zoo, and more. With so much to do and see, you may want an experienced guide to help you along the way to ensure you don't miss any important sights. Considered a top tour by many, you can appreciate the natural beauty of Seattle and explore Mt. Rainier, the highest mountain in Washington and the tallest of the lower 48 states. During this tour, you will be privileged enough to journey through scenic meadows and nature paths as well as view breathtaking lakes and waterfalls. The total time of the tour is around 10 hours and includes a hotel pick-up and drop-off from selected Seattle hotels. You can sit comfortably in the 24-passenger mini coach as your professional guide teaches you the history of Seattle's native lands. During the early afternoon, the group will stop at the Mt. Rainier Cafe, where you are able to purchase food and beverages. It should be noted that you must dress suitably depending on the weather. Whatever you do in Seattle, be sure you explore Mt. Rainier! Another natural wonder belonging to privileged Seattle, if you are a lover of wine and beautiful sights, consider touring the Snoqualmie Falls Winery. Considered one of Seattle's most popular scenic destinations, Snoqualmie Falls is an immaculate waterfall that is surrounded by verdant evergreen forests. Besides this, you will also get to visit an independent, family-run winery Ste Michelle and taste many of their world-class wines as well as sample delicious, European-style chocolates and candies at Boehm's Swiss Chocolate Factory in Issaquah. The total time of this tour is around 6 hours and well worth it. The tour also travels to many other destinations, including Evergreen Point Bridge, the world's second-largest floating bridge, and Woodinville, a winery capital of Washington. Lunches and cruise pick-up are not included in the original price. Wine-tasting fees also do not apply. Explore the gorgeous country surrounding Snoqualmie Falls! If you are a lover of the great outdoors, you should most definitely take a tour of the Olympic National Park. Beaches, mountains, farms, forests - Olympic National Park has it all. In a small group, you will be able taken in a luxury van or SUV to explore the vast expanse of natural beauty that is Olympic National Park. With a naturalist guide, you will travel along nature walks that show exquisite vegetation and wildlife. During the winter months, you may also get an opportunity to trek through snow-covered forests with snowshoes. A pick-up and drop-off is included in the original price as well as a light breakfast, gourmet lunch, and snacks. Enjoy the wild side of Seattle in luxury! One of Seattle's top attractions, touring St. Helens National Volcanic Monument is a full-day tour. With your small group, you will hike to the sight of the infamous volcanic eruption of 1980 which later lead to reforestation projects. With a professional, naturalist tour guide, you will travel just a few miles from the actual crater. You will also get to experience the gorgeous wildlife of Washington State during your walk. There is a hotel pick-up and drop-off at select Seattle hotels as well as an included light breakfast, full lunch, and snacks. You will also get to travel luxuriously in a Mercedes jeep or van. 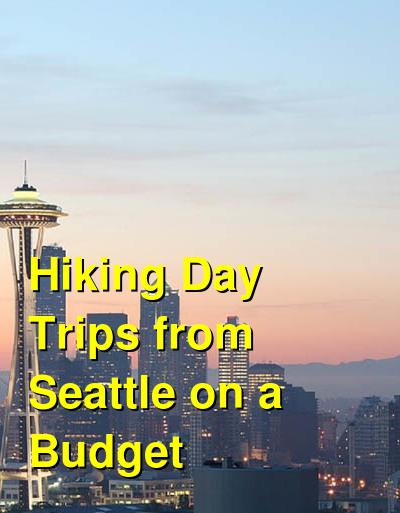