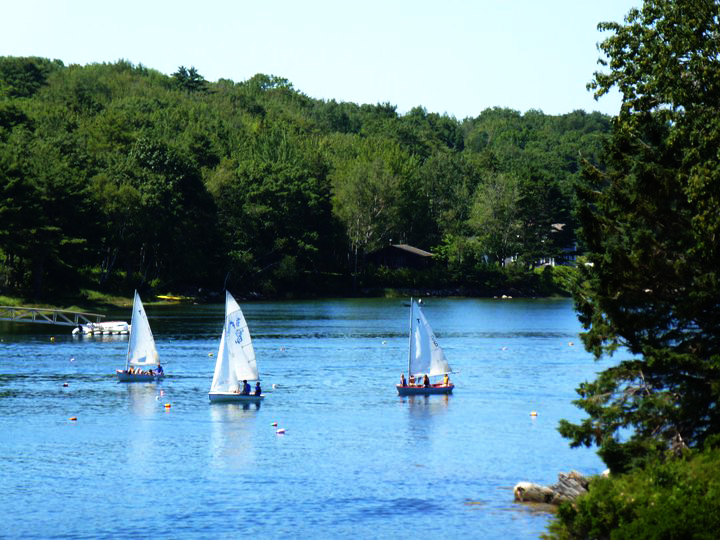 We all have that place—a family home, neighborhood, or vacation spot—that is filled to the brim with the childhood memories of summertime.  Many of my own lay within family trips up the east coast to a little bluff on the shores of Maine.  We would all come—my mom, dad, sister, grandparents, aunt, and uncle—and we would all enjoy a week together in a little rickety house on the cliffs.

It was so close to the water that I remember, sitting on the floor of the den, the bay windows seemed like the stern of a ship.  In my mind, we were on a thrill-seeking voyage, venturing to some lost island or forgotten land.  The breeze drifting through the windows only encouraged my imagination, as a storm was sure to be brewing up ahead, challenging the ship to continue onto its headings.  Memories from this summer haven fade in and out of my mind like dying firelight, yet the embers lay glowing with warmth beneath it all.

I remember exploring the grounds outside.  There was a sort of magic present whenever I wandered, like I could be anything I wanted to be or go anywhere I wanted to go.  The landscape was my playground.  I would climb crooked branches, thick with knots and covered in sap, and I would climb into another world.  I could sit amongst the highest limbs of the Balsam fir and peer through to see the ocean stretching as far as I could see, imagining what monsters or lost cities lay beneath.  I would sit there, clutching the branches, sea breeze stirring scents of pine and salt, and wonder what would happen if I took the plunge beneath the water, traveled to its depths, and explored these forgotten civilizations that I wanted so badly to exist.  I longed for the bizarre, for another world beyond this one that I could explore to my heart’s desire.

I remember my sister and I would run down to the edge of the cliff and carefully make our way down to the rocky shore.  Perched like seagulls upon weather-worn boulders, we watched the fishermen reel in their lobster traps encrusted with prickly barnacles.  We were fascinated, but the prospect of a kayaking voyage with our aunt and uncle had us packed and ready to go in minutes.  The destination: a secluded island, overgrown with trees and vines and a shore of pebbles warmed by the sun.  After securing the kayaks to the cars, and heading down to the docks, the narrow boats were launched—slicing through icy waters like slender darts through air.  With each dip and stroke of the paddle, we were propelled, gliding further and further away from the harbor.

It was different than maneuvering through a river or lake.  This was the ocean.  I could feel its power, taunting me with sharp dips and swells—and the wind, its companion, only magnifying that force.  I squinted ahead and tossed my windblown hair aside to lock my gaze on the destination.  The island was just there, between me and a stretch of open water.  I tightened my grip on the paddle, feeling a new urge rise within me to conquer the challenge.  I lifted the paddle and the sea fought back, sending up a cold, salty spray.  I let it brush my shoulder as I plunged the paddle back into the depths and pushed forward with all my might, gliding over a massive swell getting closer and closer to the shore dotted with trees on the horizon.  A ride upon these waves had to be earned, and I felt a thrill as they began to carry me atop their churning green abyss towards my journey’s end.

Hours later, we had returned from our voyage offshore.  My sister and I would often sit on the floor of the den in a tangle of threads, weaving bracelets and key chains and all sorts of things to keep us busy.  This time we were surrounded by an ensemble of snores—my grandpa and uncle each in a recliner, and my dad spread-eagle on the sofa—all three with their mouths hanging open, as wide as the windows letting in the ocean breeze.   One after the other, they sounded their soporific symphony in perfect harmony.

The pits of laughter boiling in our guts reached their peaks as we dashed out the door, strings trailing at our backs.  We collapsed onto the lawn of the bluff, rolling with hilarity, and as the last traces of giggles finally faded, our grandma came out and slipped us a few dollars for ice cream.  We snuck away to the General Store still giggling, the sky vibrant with the light of the setting sun.

These are the memories that flicker and fade, yet the closeness to the New England shore brings them into focus.  It was a place of my childhood, where my imagination could go wild and my only concern in the world was which ice cream flavor I wanted.  Places like these are what keep the glow of times-past alive.  Sometimes they sneak up on us.  Whether it’s a smell or a feeling or an experience in a new place altogether, that nostalgia and taste for adventure brings out the kid in us all over again.