How much does it cost to travel to England?

How much money will you need for your trip to England? You should plan to spend around £116 ($144) per day on your vacation in England, which is the average daily price based on the expenses of other visitors. Past travelers have spent, on average, £30 ($37) on meals for one day and £20 ($25) on local transportation. Also, the average hotel price in England for a couple is £122 ($152). So, a trip to England for two people for one week costs on average £1,618 ($2,020). All of these average travel prices have been collected from other travelers to help you plan your own travel budget.

A vacation to England for one week usually costs around £809 for one person. So, a trip to England for two people costs around £1,618 for one week. A trip for two weeks for two people costs £3,236 in England. If you're traveling as a family of three or four people, the price person often goes down because kid's tickets are cheaper and hotel rooms can be shared. If you travel slower over a longer period of time then your daily budget will also go down. Two people traveling together for one month in England can often have a lower daily budget per person than one person traveling alone for one week.


How expensive is England? How much money do I need for England?

How much does a trip to England cost? Is England expensive? The average England trip cost is broken down by category here. All of these England prices are calculated from the budgets of real travelers.

How much do vacation rentals cost in England? Prices vary by location, date, size of the place, and the level of luxury. See below for options.

How much does it cost to go to England? Naturally, it depends on the dates. We recommend Kayak because they can find the best deals across all airlines.

The price of renting a car in England will depends on dates, the type of car, the location, and your age. We recommend Kayak because they can find the best deals across all car rental companies.

Tips and Handouts Budget in England

England On a Budget 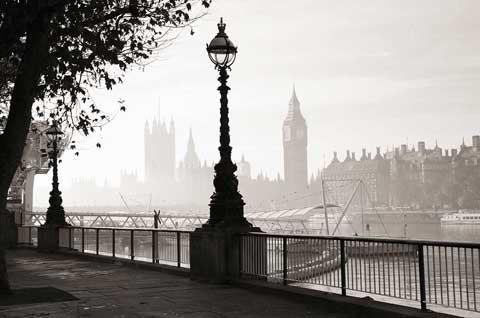 London on the River Thames
England is a destination people dream of â probably because England itself can be a dream. With double decker buses, quaint cottages and royal families, this country is the land of fairytales and folklore.

Do not confuse England for the United Kingdom or Great Britain. The UK, or Great Britain, is a constituent nation made up of England, Scotland, Wales and Northern Ireland.

This country of 52 million people has gained an awful reputation for being gray, cold and rainy. In truth, the temperatures never reach either extreme and the rain isn't as frequent as you'd think.

While most everyone in England speaks English, be ready for thick accents. Typically divided by northern, southern and London accents, many can be very difficult to understand and may as well be a language of their very own.

The whole of England has a wide variety of regions and cities to visit: Liverpool, Manchester, Bristol, York, Nottingham and many more.

No doubt, the most iconic sights in England are in London. As the most popular spot in the country for tourists, there are countless museums and historical sites to visit. To name a few there are Buckingham Palace, Westminster Abbey, The Globe Theatre, Beg Ben and Piccadilly Circus.

The Tower of London is also worth a visit. Home to the British Crown Jewels, this building was a prison for hundreds of years and is said to be the most haunted spot in England.

In the south of England stands one of the most important prehistoric sites in the world. Stonehenge is one of the world's greatest unsolved mysteries. Evidence indicates the stones were erected sometime in 2500 BC.

In the north part of England is Hadrian's Wall. Running the 117 kilometers from the Irish Sea to the North Sea, this wall was originally built by the Romans in 122 AD. It was intended to protect their colony Britannia from Scottish tribes, and today there is a national path following the length of the wall for tourists to visit.

Located in the midlands is one of the top attractions in the whole of England â Warwick Castle. Built in 1068 by William the Conqueror, this castle was rebuilt in stone during the 12th century. It is a stunning castle to tour for an afternoon.

Up in the northwest part of the country, in County Cumbria, is the Lake District. This region is the largest National Park in England. With lakes and fells providing the most dramatic scenery, this spot is a favorite amongst hikers and climbers.

The Cotswolds is a gorgeous region in south central England for anyone looking to travel back in time. This range of hills, stone-built villages, historical towns and stately homes will have any visitor feeling like they're strolling along the times of Canterbury and his tales.

England as a country is divided into three regions that are then divided into smaller counties. There is Southern England covering area south of the River Thames, including London. The Midlands are the regions located just east of Wales, and Northern England lies north of Staffordshire and includes the region of Yorkshire.

England, like most other western countries, is fully equipped to offer any activity that you could be interested in. However, there are some experiences that are uniquely England.

In the center of London, on the south bank of the Thames is the London Eye. This giant Ferris wheel is 135-meters tall, and the largest of its kind when it was first built. It is the most popular paid tourist attraction in the country and is definitely worth the view.

One of the greatest draws for culture in England is seeing a show on the West End. Many of the shows featured here will soon be moving to Broadway, so consider the West End a little sneak peek to what's coming across the pond.

And it wouldn't be a trip to England without some football (soccer in the US). There are many leagues, or teams, to follow and the English take it all very seriously. Look into getting tickets to a match, or simply stroll down to the local pub to watch with a pint in your hand. Word to the wise, don't root against the local team.

As England is one of the most visited countries in the world, there is no shortage of foods to and tastes to try. Some of the popular dishes include biff wellington, steak and kidney pie, Yorkshire pudding, and of course, fish and chips.

Given England's long history with India, you'll also want to be sure to try some of the curry. It's the most authentic you'll find outside of India.

The best and easiest way to get around the country is by train. England has the highest densities of railways in the world. Hop a train enjoy watching the countryside pass by your windows.

Within the smaller cities, taxis are everywhere and each town has its own bus service. Renting a car is an option, but beware that traffic may be rough and the English drive on the opposite side of the road.