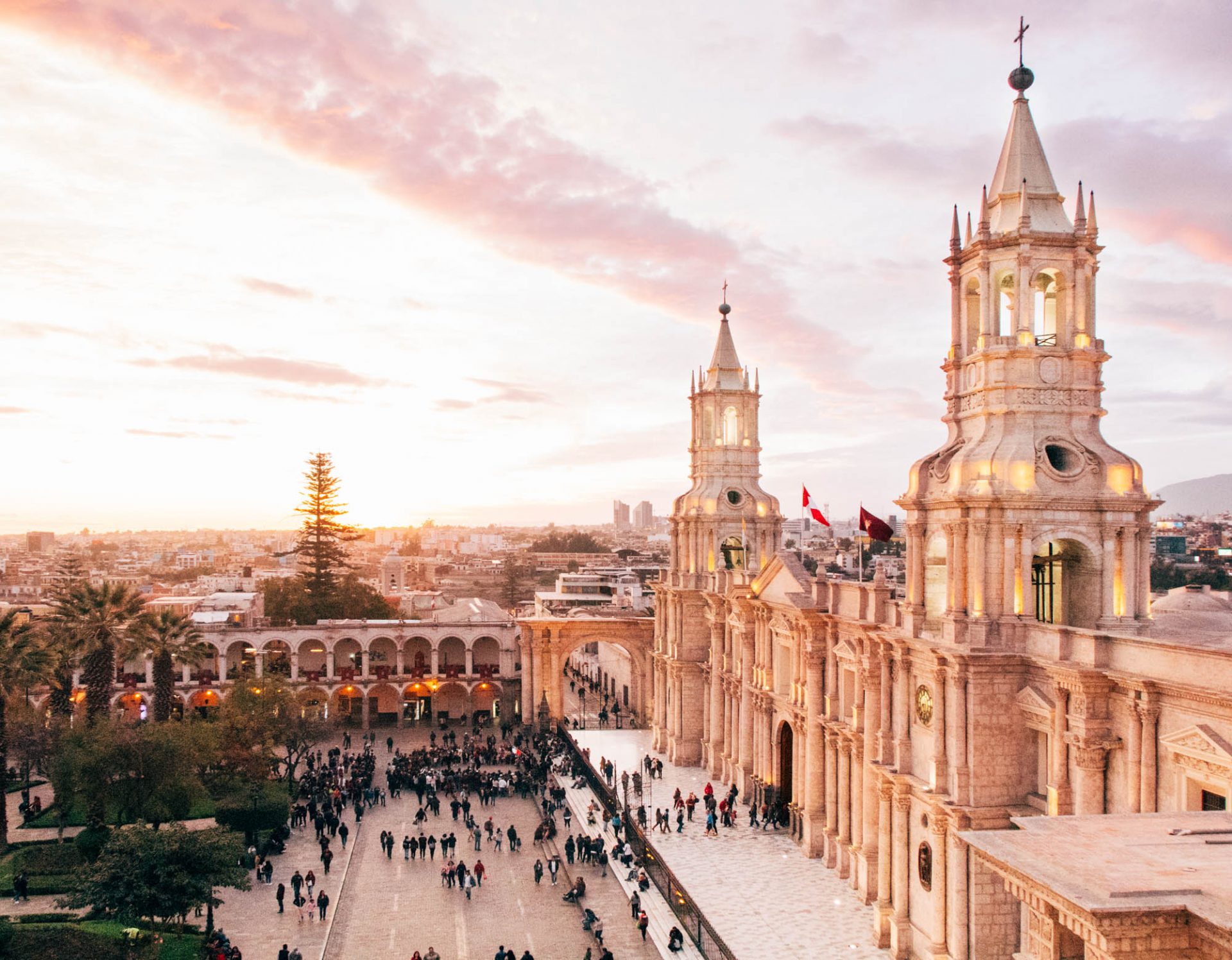 Headed to Cusco? Many people fly into Lima and then straight to Cusco. But there’s another great way to get to Cusco that is totally worth the extra time. Not only will you get to experience more of the Peruvian desert and the Andes, but you will probably arrive in Cusco a little more acclimatized to the high elevation.

You can take a bus called PeruHop from Lima to Cusco which stops at some cool towns on the way, with a variety of free and optional paid tours along the way. We tried this route and found it an excellent way to see a lot with minimum hassle.

One of the first spots is a town called Paracas. Paracas is a small fishing town that has a natural reserve that we visited, as well as being a great way to access the Ballestas Islands. 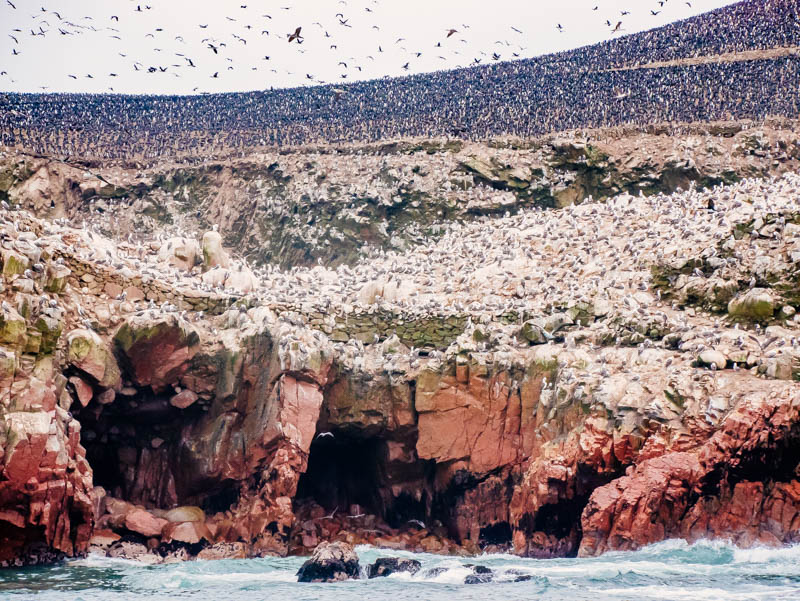 They’re a small group of rocky little islands that are sometimes called the Poor Man’s Galapagos, which we took with a grain of salt.

As we approached the islands, they looked like a bunch of rocks but as we got closer, we could see that the surface was teeming with thousands of birds. All the black areas you see here were one kind of bird, and the white areas, another.

Most of the birds are a breed called the Peruvian booby, but among these very common birds, you can sight some beautiful large pelicans. Pelicans are one of my favorite birds, so I was excited to see a new breed with their colorful beaks.

As well as the pelicans, you might get lucky and catch the Humboldt penguin, which is endangered. We were pretty excited to see this adorable little trio heading to the water.

After the islands, we headed to the Paracas National Reserve. It’s an area where the desert meets the ocean making for some dramatic views. There also used to be a rock arch called the cathedral but it fell during the earthquake of 2007. 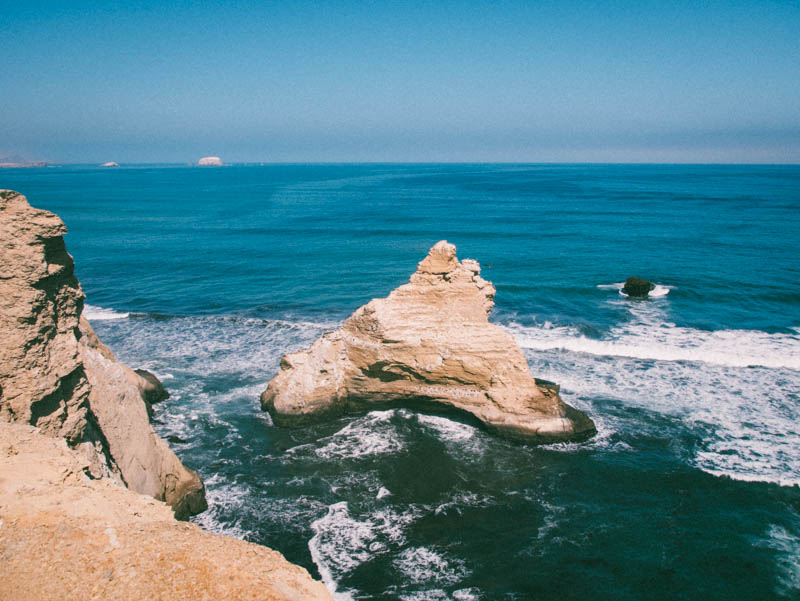 The Paracas were an ancient culture that lived in this region 900 B.C. to 400 A.D. and were famed for their incredible skills in pottery and textiles. Sadly we didn’t get to see examples of these artifacts, but it is interesting history that we heard about from the guide and looked up later.

Next stop down the road is the town of Huacachina. It’s another small town that is actually a little oasis in the desert. The desert around there is completely barren with sand dunes like you might see in the Middle East. I grew up in Dubai and it surprised me to feel a pang of nostalgia all the way out here in Peru! 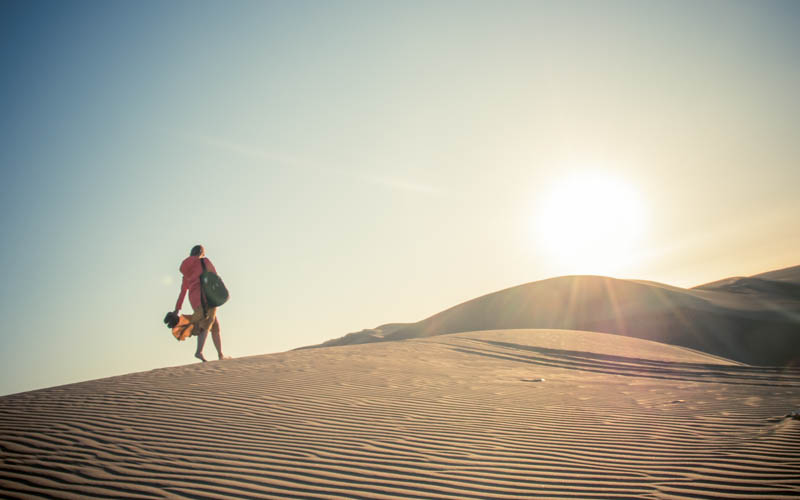 A popular activity in Huacachina is to go sandboarding in a dune buggy. It’s super fun, but you can also tag along for just the dune buggy ride (which is quite the rollercoaster) even if sandboarding doesn’t interest you. The views as you bounce along the dunes are pretty cool too, if you can hang on to your camera!

At the end of the ride, the buggies let people off for a great view of a sunset overlooking the oasis. Since you will certainly be sharing the view with a lot of people, I suggest you take your time to walk away from the crowds and soak it in alone as I did. 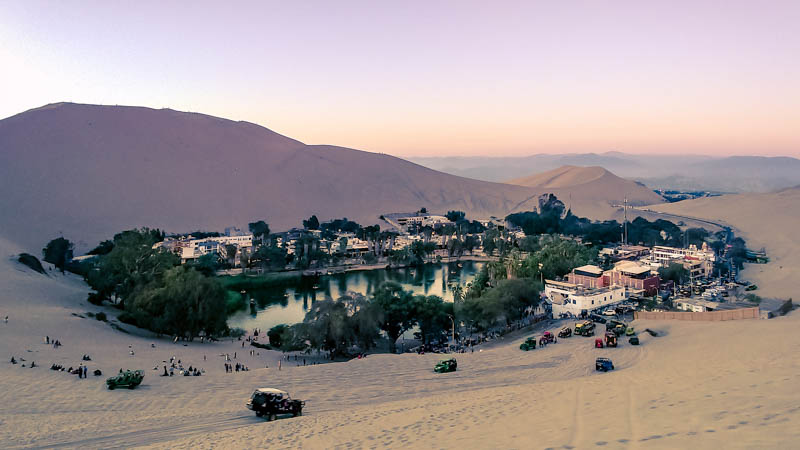 After a night in Huacachina, where we had some delicious pisco sours, we headed down the road to Nazca. Nazca is known for the Nazca lines – which are a number of large ancient geoglyphs scattered over the desert landscape. No one really knows why they were made, and you’ll probably hear some weird stuff about aliens, but the most likely story is for religious reasons.

You can see a couple of them from a viewing tower near the freeway but the best way to see a number of them is a flight over the desert. We opted to take the flight, because it was a great opportunity to get also get an aerial view of the Nazca desert. We were fascinated by the green fields they somehow irrigate in this almost Martian-dry landscape.

Also, of course, you do get a pretty great view of many of the Nazca glyphs. Like this one, the condor, one of my favorites.

After Nazca, we moved on to Arequipa which is the second biggest city in Peru. Arequipa has a strong local identity that they are very proud of. They have one of the prettiest main plazas we’ve seen in all of South America thus far, with a massive cathedral flanked by arched pathways facing a graceful fountain.

Many of the buildings in Arequipa are made of a white volcanic rock called sillar. Near Arequipa, you can actually visit the quarry where they mine this rock, although we didn’t get the chance. I loved the style of architecture which seemed to be a cross between Spain and Inca ornamentation. It’s called baroque-mestizo and is unique to the Andean region.

Near Arequipa, one day trip worth making the time for is the Colca Canyon. This is a canyon that’s twice as deep as the Grand Canyon, if you can believe that! Lined with Inca terraces, and Andean condors flying overhead, it really is quite an incredible sight. 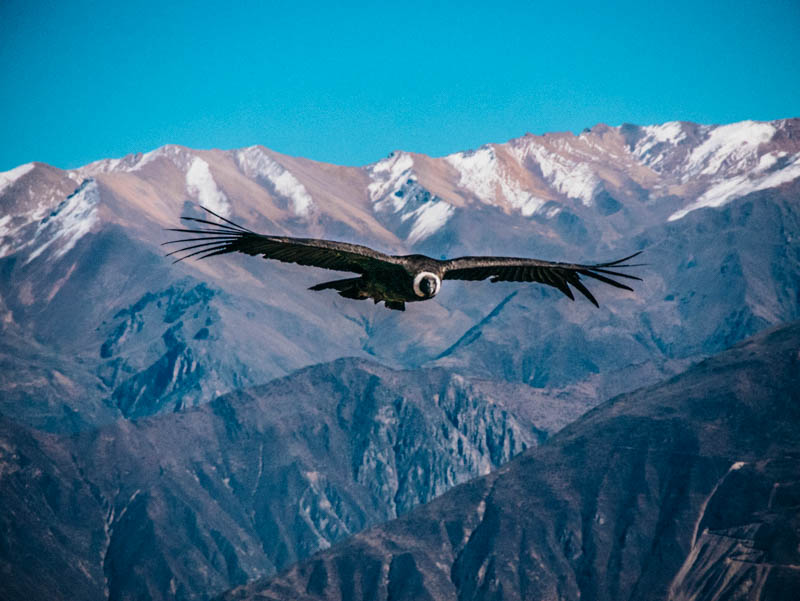 There’s a number of 2-3 day treks, as well as some tours that are lower effort. Some of the stops along the tours are definitely on the touristy side, but the landscape is worth experiencing.

After Arequipa, you can either head to Lake Titicaca or skip the lake and go straight to Cusco, which is what we did. You do have to decide this beforehand when you buy your ticket from PeruHop. The Arequipa-Cusco route is pretty much a straight shot. And there are a million posts about Cusco and Machu Picchu so I’ll stop here.

Most people go to Peru only to see Machu Picchu. While it is quite stunning, I will say the experiences we had along the way stand out in my memory as much as Machu Picchu did. None are as grand, taken by themselves, but seeing a bit more of the country and Andean life makes for a more enriching experience.

Shimona Carvalho is a photography buff who loves sharing great travel locations as well as tips and tricks for getting the best shot. A software engineer by profession, she decided to take a break, follow her passion and travel the world. When she’s not out shooting or sharing her favorite photo spots at SidecarPhoto, she loves learning new languages and cooking global cuisine.