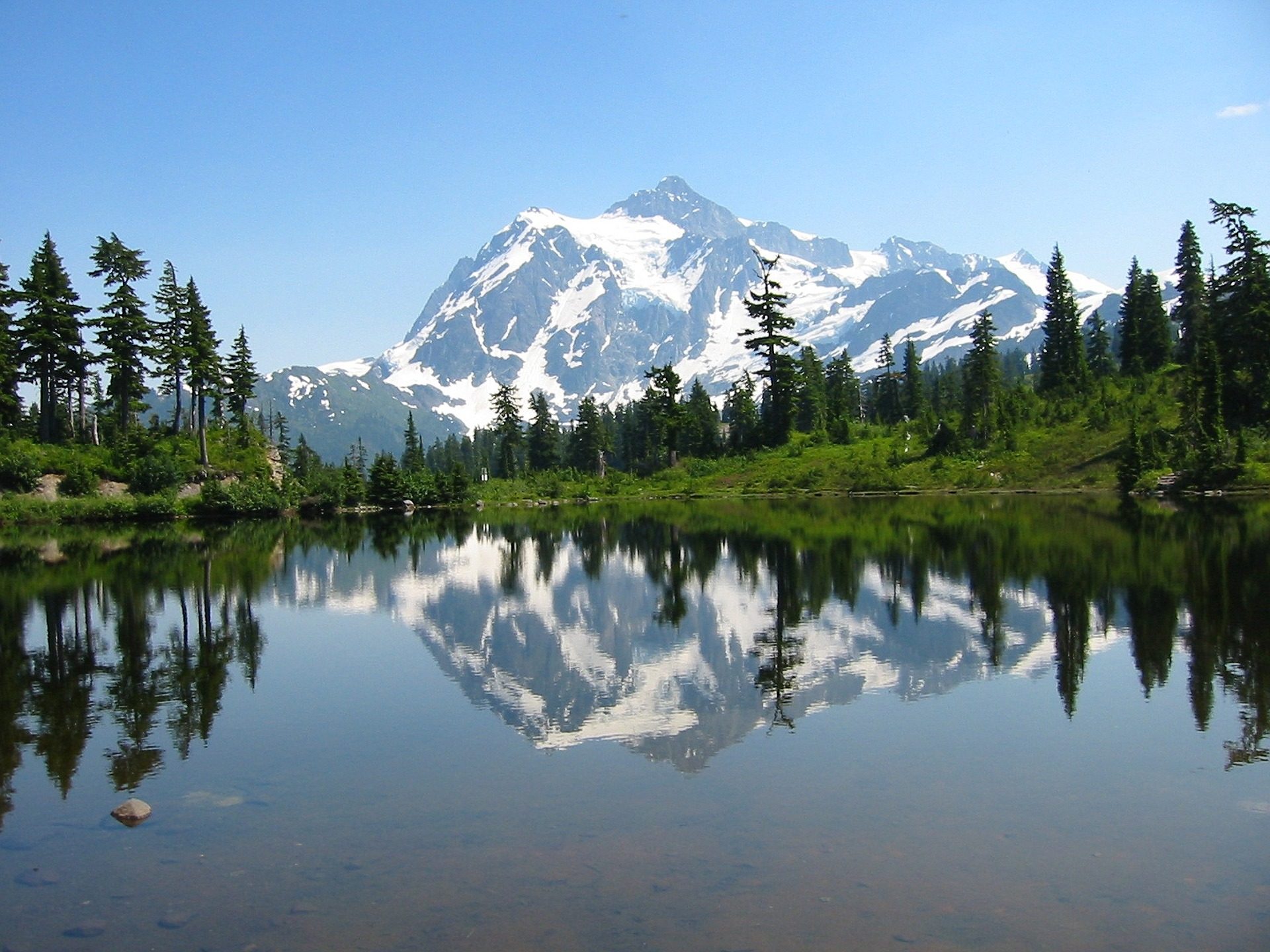 A trip to North America is a dream come true for anyone who loves nature and the big outdoors. And it was the beginning of the greatest journey I was about to experience with my wife. We had planned this trip for almost a year before we finally felt like we were ready. We thought we had covered every destination we planned to visit and listed every campground we planned to spend our nights in.

North Cascades National Park was the first destination on our list. We had planned to do some great hiking and see some amazing wildlife here. We started our journey from Seattle and immediately fell in love with the beautiful surroundings of Washington State.

The serpentine roads crossing crystal clear rivers, the breathtaking mountain peaks appearing after every turn, and the green old pine forests surrounding magical lakes – the views were unbelievable. We had never experienced anything as spectacular before.

As soon as we arrived at North Cascades National Park Wilderness Information Center, we found out that all the campgrounds were full. And it was in the middle of the week! Coming from Northern Europe, I did not imagine that people love the outdoors here that much. Luckily, the National Park Service employees at the visitor center were magnificent and explained to us the two options we had left.

The first option was to try and squeeze into a free campsite. Sadly, there were so many people there, we did not even find a place to park our car. So we were left with the last resort – camping in the middle of the forest on a side of a road on BLM lands.

After driving for about an hour, without any other tents on sight, we have made our best effort to park our car on the location the ranger pinpointed for us. It was already getting dark. We pitched our tent and made a small fire to cook some food. There were no other people or cars on sight. The forest was full of wildlife noises. After our fire burned out, it became completely dark. At that moment we knew that life doesn’t necessarily go as planned.

Right after a quick dinner, we crawled into our tent. We wanted to get some sleep, get up early and try to get a walk-in spot in an NPS campground the next day. Right after we got into our sleeping bags, all the wildlife noises became even louder.

Every minute I heard a new screech, hoot or squeak. I was jumping up with every noise around our tent. I was already picturing the worst things in my head – bears lurking around, wolves sniffing us out in our tent. A few times I even thought this place reminded me of a scene from a slasher movie. I remember unzipping our tent with a flashlight in one hand and a knife in the other, trying to surprise the beasts outside. I could not see further than a couple of meters in front of me. But I stayed prepared to guard our tent from whoever was out there.

Well, that was my experience. My wife was sleeping like a baby. She wasn’t bothered by any wildlife noise or possible creatures, lurking outside. The only thing that was bothering her was me getting up and clapping every half an hour, trying to spook off beasts that weren’t even there. I did not get much sleep that night. But I still get mocked for it by my wife every time we remember the North Cascades.

We woke up early the next day. The sky was clear, there was a refreshing breeze and even I understood how silly I was stressing out that much for being in the wilderness. After all, that was the main reason we have planned this journey! Since that night, I have learned to relax in the wild and even started appreciating the noises. I actually started to want wildlife around me.

Amazed by the National Park Service

We arrived at Colonial Creek Campground, which is a National Park Service campsite, very early. We immediately found out that there were only two spots left for a walk-in campsite. That was luckily one more than we needed. The first thing I noticed, was the amazing and effective way of giving out the camping spots. The NPS employees knew exactly how many campsites were still empty. They also knew what was the fastest way to find them and pointed us to the information board where we were able to find everything about the campsite. The NPS was able to contact other campgrounds and point the other visitors to places that still had availability.

This was the first time we were going to stay in a campground in North America and we did not know the rules or what are we getting ourselves into. And frankly, we were amazed by the cleanliness and the amenities it had. Every campsite had enough space not to be disturbed by neighbors. There was a fire ring with a cooking grate. There were also potable water sources throughout the campground. There was even someone selling firewood so you would not have to worry about buying it in a shop. And bear in mind that gathering firewood is prohibited in most of the national parks across the US. We even had the luxury of flush-toilets nearby. This was everything we needed to make ourselves feel comfortable.

Another amazing thing the NPS is great at is their educational programs. Just when we thought we are going to have to spend our evening by the fire, waiting for the day to end, we were approached by a park ranger. She invited us to go to an educational event that was happening that evening. It was an amazing presentation about bats and the benefits these animals bring to the wilderness. We found out, that they had similar educational events happening almost every day.

North Cascades National Park is a great recreational spot for everyone. It has amazing opportunities for kayaking and white water rafting. The park is full of diverse wildlife for animal lovers. You can (but probably won’t) meet mammals like black bears, cougars, lynxes, bobcats, wolverines, and there are over 200 species of birds. It’s home to some of the biggest trees and other beautiful native flora you won’t see anywhere else.

North Cascades has some of the most stunning scenery in the US. That’s why it’s a perfect destination for hikers. Hiking in North Cascades created big expectations for the next national parks we were going to visit. We have done the Cascade Pass hike and the Diablo Lake Hike on the same day and have enjoyed every minute of them.

Sometimes the park gets overshadowed by the more famous destinations in North America, but it’s actually a plus side. You’ll get fewer people on the trails and have more great experiences just for yourself.

A road trip through the national parks in North America can get expensive. The majority of the bill adds up from the plane tickets, vehicle costs, and accommodation. Although not knowing where you can save money, can be costly in other aspects of the trip. So here are some great tips for budget travelers!

A lot of travelers book hotels and AirBnB’s and only stay in campgrounds when they are in the national parks. We found that it’s a lot cheaper to stay in campgrounds throughout the whole trip. Some of the best places we found were private campgrounds. They offer all the amenities such as laundry service, showers, internet, and even a kitchen. They usually cost around 70% cheaper than a hotel room and the vibe is great. Just mix in these private campgrounds between your national park campsites and you’ll manage to stay low on the accommodation budget.

Rent an economy class instead of an RV

An RV can be a great way to save on accommodation but you won’t be able to go as cheap as renting an economy class car and camping in a tent. RV campsites can cost up to double what a regular campsite can and the rental prices are greater as well. You can find amazing deals on economy class cars on SkyScanner’s website which gives you the best prices from major rental providers in America. If you pick up and return the car to the same location it’s also a great deal cheaper.

Buy a cooking stove and some gas

This might be obvious to Americans, but not so much to visitors – buy yourself a small cooking stove and a few gas canisters. When we first time went to America, we thought that we will be able to gather wood and make fires all the time. Firstly, in the majority of national parks we’ve been, gathering firewood is illegal. Secondly, buying firewood will be a lot more expensive than getting yourself a stove and a gas can. It’s also a lot faster and easier to cook with, and you are not as much weather dependent as you are trying to light a fire in the rain.

Buy an Annual Park Pass. It only costs $80 and allows you to enter every national park in the US (for everyone in your car, not just per person). If you plan to pay for the entrances separately, it will cost you around $25-50 for each park.

The Bureau of Land Management is a government organization responsible for public lands in the U.S. Some of these lands can be found near the national parks and are often used by visitors for free camping. Not only is it a great way to lower your budget but it’s also a great last resort when you can’t find a camping spot.

Lukas Saville is a travel writer who’s main focus is adventure travel. His passion for wildlife and nature has carried him to many countries of the world. He loves hiking the best trails on earth and sharing his experiences through writing. He hopes his experiences will help more people to start their own adventures and appreciate the world surrounding them a little bit more. You can see more at 10Adventures.com.