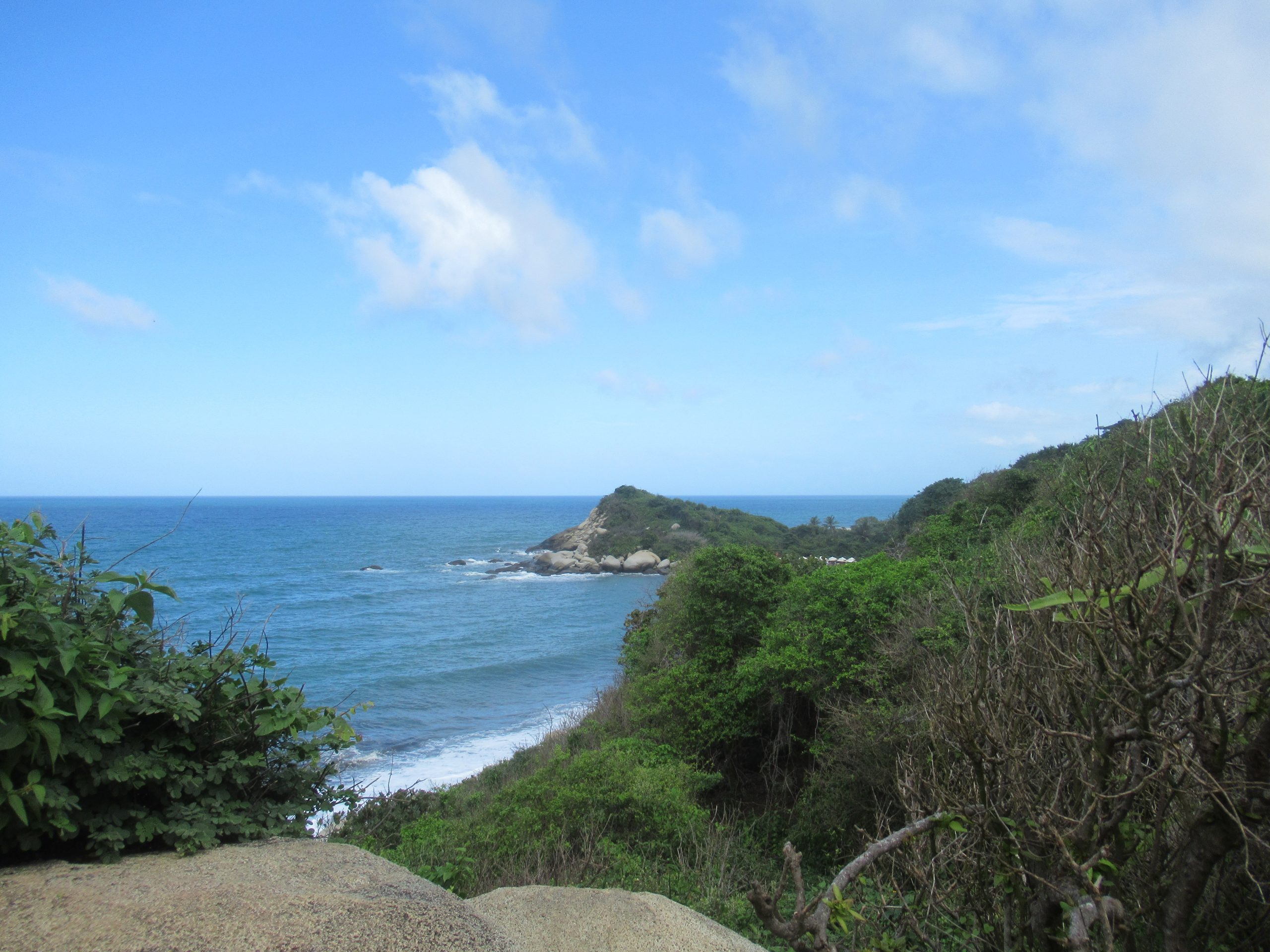 While Cartagena is undoubtedly the most well-known tourist destination in Colombia due to its year round beach weather and neat colonial vibe, another great thing about it is that it is a great gateway to see other destinations in Colombia, especially along the rest of the Caribbean coast.

Among the great places to check out along the Caribbean coast include the fellow colonial era city of Santa Marta, the pretty mountain town of Minca, the chill backpacker beach town of Palomino, and, for the more adventurous, the desert peninsula of La Guajira.  All of these can be done as a weekend escape from Cartagena.

However, if I had to say there was one can’t miss spot for a weekend get away from Cartagena, it would have to be Tayrona National Park, located just north of Santa Marta.  Colombia’s most well known national park, Tayrona offers beautiful scenery with the foothills of the Sierra Nevada mountain range running into the Caribbean Sea and mostly unspoiled beaches.

Usually 1 or 2 nights in the sun and camping accomodations is perfect for Tayrona, making it a great weekend trip from Cartagena.  Whether you’re an avid hiker, a beach bum, or just want some peace and quiet and fresh air to go with a beak from the city, you will love Tayrona National Park.

What to See in Tayrona National Park

Really and truthfully, the main attractions here are the scenery and the beaches.  A protected area, there are some good wildlife spotting opportunities here.  Birders will love it.

Additionally, if you are quiet, you may be able to get a glimpse of small monkeys or sloths in the forests.  Crocodiles are even occasionally seen on the beaches or in the inlets coming from the sea.  Those you may not be quite as excited to see though!

Besides the wildlife, one of the best things to see in Tayrona is just taking in the amazing views of the beaches, hills, and giant rocks.  The hike in to the main accommodation area in the park takes you on a moderately easy hike through the forest before going up in the hills over the beach.  There you can get an amazing view of the beaches below and the giant boulders that make up the roots of the mountains, battered by the incoming waves.

You’ll then hike down to the beaches themselves, where you’ll hike along with the wind, and maybe some sand, in your face.  Do note that these first beaches you come to, known as Cañaveral and Arrecife, are extremely unsafe for swimming due to strong currents and, in Arrecife’s case, rocks and coral in the water.

After this stretch out on the beach, you’ll reenter the forest for a bit of your hike.  Do be careful and try to avoid the horse trail, as it can get muddy if it has been raining.  Be on the lookout here for a small bakery run by two locals.  They have awesome breads, especially if you happen to get there when it is fresh and warm.  If you pick up a few extra, you can also save a few pesos on food later.

See Also  The Best Fishing Spots Around the World

After a bit more time hiking, you’ll come back out to a series of beaches.  Here, you can actually take a dip and swim, and you’ll start to see some small restaurants.  The best known of this series of beaches is La Piscina (translated as the pool) where rocks located out in the water stop the waves and create calm waters, like a natural swimming pool.

Even if you do choose to take a dip here, you’ll still want to continue on a bit further to arrive to the area known as Cabo San Juan del Guia.  A tiny bay formed by a rock formation that juts out into the sea with a decent beach on either side, this is also the most popular place to stay inside the park (more on that below).

If you continue past Cabo San Juan del Guia, you will come to another nice beach.  This beach is actually a nude beach, although there is usually not many people there and most people don’t actually go in the nude.  A nice long beach with lots of shade spots in the trees and few people, it is actually my favorite in Tayrona.

However, the waves here can be quite rough, and swimming is not recommended, so get in the water at your own risk.  It is a great place to chill out and read a book though, and well if you’re into hanging out in the nude, that too.

Up in the hills above Cabo San Juan del Guia, there is a tiny indigenous town known as Pueblito.  There are also some small ruins of ancient pre-colonial indigenous settlements here.  There you can see platforms carved on to the hills for farming.  The ancient Tairona indigenous culture, from which the park draws its name, was among the most advanced in the Americas before the arrival of Europeans.

In 2019, Pueblito was temporarily closed to visitors at the request of the current residents, however, and it’s unclear if it may reopen at some point in the future.  In the event that it does, it’s worth noting that the hike is moderately difficult with several steep inclines and a few points where you have to climb over boulders.

Finally, there are a few other beaches to see in the park a bit further away.  Most notably among them is Playa Brava, which is a several hour hike from Cabo San Juan del Guia or can be reached by entering at the Calabazo entrance to the park instead of the main Zaino entrance.  There is also another longer hike higher up in the hills known as the 9 Piedras trail.  This hike is on the tougher side.

Where to Stay in Tayrona Park

As mentioned above, most travelers choose to stay at Cabo San Juan del Guia.  Here you can stay in your own tent, rent a tent, or stay in hammocks.  There are a limited number of hammocks atop the big rock on the point for a slightly higher price, and the amazing view that goes with it.  There are also a handful of small cabins available for rent.

See Also  Rio on the Cheap

All of these accommodations include access to the bathrooms and showers on site.  They are pretty decent for campsite facilities.  There is also an onsite restaurant and general store.  The restaurant has decent prices, comparable to the rest of Colombia, and offers breakfast, lunch, and dinner.  Expect to spend approximately 20-30,000 pesos for standard chicken or fish plates.  There are pricier things like shrimp as well as vegetarian options.

For more budget friendly options, there is also a vendor that sometimes sells pretty tasty sandwiches around lunch time outside the restaurant.  The general store also sells things like cans of tuna and snacks, and you can bring in food.  However, you are not allowed to set a fire, so only bring in things that don’t need to be cooked.

For those willing to spend a little more, there are more upscale accommodations earlier in the trail just before Arrecifes Beache or in the Ecohabs near Cañaveral.  There are also beach hostel type accommodations at Playa Brava.  However, the best budget option is undoubtedly Cabo San Juan del Guia. You can stay in a hostel in Santa Marta, or see options around the park on AirBnB here.

How to Get to Tayrona

If you’re coming from Cartagena or elsewhere to the south, you’ll need to arrive first to Santa Marta in most cases.  The charter bus service Marsol does offer a few direct buses from Cartagena to the park.  However, there are more options to arrive to Santa Marta, whether with Marsol, the other charter bus service Berlinas, or from the bus terminal in Cartagena.  All of these services are also options to get to Tayrona from Barranquilla.

Once in Santa Marta, the most budget friendly option to get to Tayrona is the bus.  You can catch the bus to Tayrona from the market in Santa Marta.  You’ll see the bus with Tayrona and Palomino listed in the window.  It will leave when it is nearly full, and buses go throughout the day.

Do be aware that locals will get on the bus along the way, and you may end up very tightly packed.  I’ve been on board this bus with a box of chicks and a stack of bags of concrete.  Depending on how many stops the bus makes to drop and pick up passengers, it should take 90 minutes to 2 hours to get to Tayrona, and the “sparring,” or guy that collects the money will usually shout out when they are at the park.  If you are unsure, just let them know to tell you when they are there.

You can also get a taxi from Santa Marta and there may be some collective taxis to go to Tayrona, but these will generally be more expensive.

If you’re coming from north of Tayrona, you can catch the bus from Riohacha that runs along the main road outside of Palomino and the road out of Costeño Beach.

Adam McConnaughhay has lived in Cartagena, Colombia, since 2011. He works as a teacher, has visited Tayrona several times, and writes about Cartagena and other destinations around Colombia at CartagenaExplorer.com. Learn more about his site on Facebook.