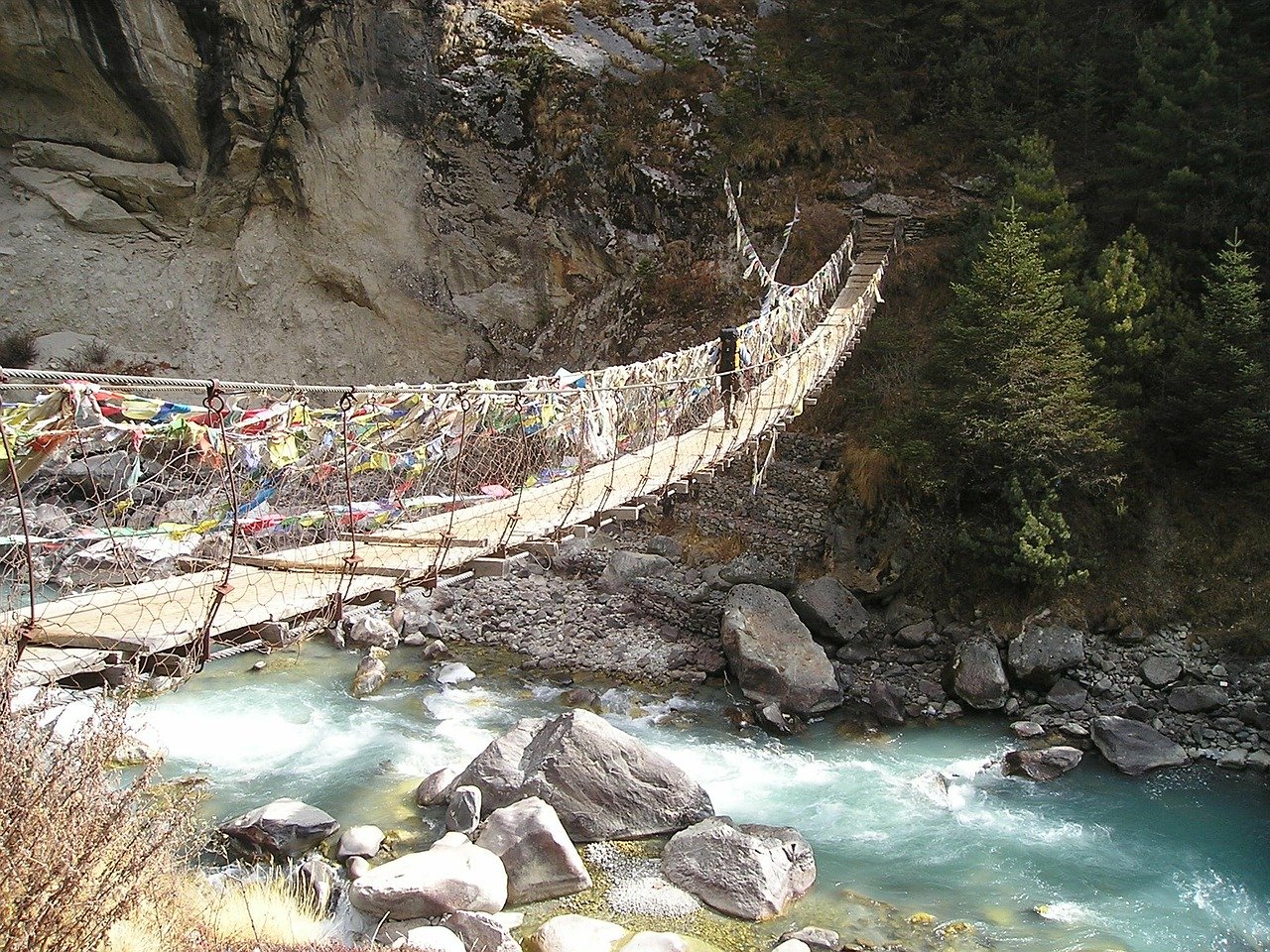 Home to many of the world’s tallest mountain peaks, and with a diverse topography, Nepal has become a renowned trekking location, in large part due to Mt Everest, and a number of high Himalayan peaks. But there are many incredible activities across Nepal, suited to people of all preferences, and sense of adventure!

If you’re interested in adventure activities you can do in Nepal, here we’ve listed 12 exhilarating adventures.

Many people don’t realize that you don’t have to trek to take in Mt Everest. An Everest Base Camp Helicopter tour is one of the most popular adventurous activities in Nepal.

If you’ve ever done a helicopter tour, you’ll know that it’s already a thrilling experience – but add in the world’s highest mountain as your view and you’ve never seen anything more beautiful!

Helicopter tours in Nepal are a luxurious ways of reaching incredible trekking destinations, without having to do the leg work (pun intended). And they’re not just limited to Everest – there are several destinations you can visit in a helicopter. An Everest base camp helicopter tour is the mostthrillingand popular helicopter tour in Nepal, but you might also consider flying over places like Kalapathhar and Namche Bazaar.

Helicopter tours also operate to amazing tranquil lakes at Tilicho, Gosaikunda, Shey Phoksundo, Rara, and several others. You’ll be flying through gorges, between giant hills/mountains, without having to walk!

Nepal is one of the most well-known destinations in the world for paragliding, and Pokhara is the best place to glide. It offers stunning mountain views, and safe departure and landing zones. The 30 minute flight off the Sarangkot slope will take you around 3,000 m off the ground, with views of the Himalayan Ranges.

The lakes and streams draw a mind-boggling design on the land as it clears its way through the slopes, the snow-capped backwoods, and the rustic settlements. But, if you’re looking for something even more adventurous, Nepal also offers an activity called Parahawaking. This is a combination of paragliding and falconry, where bird of prey will fly alongside you, and land on your arm.

Skydiving is offered all over the world, but it’s even more adventurous in Nepal. The courage it takes to jump out of a plane may already be tough for you to muster, but if you’re up for a truly thrilling adventure, you can do the Mt Everest skydive.

See Also  10 Unmissable Things to do in Seoul

The height you jump from in Nepal simply isn’t offered in any other country. You’ll ascend in a plane to the summit of Mt Everest (weather permitting), and jump from 23,000 ft into a space guarded by the Everest Range.

The Everest Skydive is a once in a lifetime experience, places are expensive, and highly limited. But skydiving is also offered in Pokhara, for great views of the Annapurna and Machhapuchhre range. These skydives are more common among everyday travelers, and will see you jump from a height of around 11,000 – 13,000 ft. Which is definitely considered more normal in the world of skydiving. If we’re being totally honest – the Mt Everest Skydive is the world’s most extreme!

Mountain biking is only a relatively new adventure sport in Nepal, though the most popular journey begins from Kathmandu and heads towards the Himalayas. Local biking clubs will organize various biking events throughout the year, and travelers are welcome to tag along with these events, or you can go on your own and organize a customized route.

Mountain biking is a great way to connect with the lifestyle and culture of the rural population of Nepal, which is an experience that many travelers don’t get.

We’re about to talk about trekking in Nepal, but the Everest Base Camp Trek is such a popular draw, that it deserves its own subheading.

This incredibly famous trek is the option for non technical climbers who want to say they’ve spent time on Mt Everest. Through 12-14 days of trekking along rocky tracks in Sagarmatha National Park, you’ll challenge yourself on grueling inclines at increasingly high altitudes.

A test of both physical and mental strength, this is a serious challenge through an incredibly hostile environment, and you’ll need to be prepared for altitude sickness. But being able to say that you’ve climbed to the base of the highest mountain in the world is something not many others can claim!

Defined by its outdoors and natural environment, Nepal is naturally one of the most famous countries in the world for trekking. While trekking in Nepal, you have a diverse range of route options, which may begin with greenery, but end with a snow capped mountain.

To put it into context, around 1,310 peaks have been discovered in Nepal, 326 of which are open for climbing. The highest peak of Mt. Everest is obviously one of them.

The number of treks Nepal has to offer are countless, so to make your decision making process easier, the treks are given on the basis of the regions they fall into.

The Everest region and the Annapurna region are the most popular locations among trekkers. Each region has its own unique character that makes it different from the others, so it’s important to research each trekking region and identify which routes best suit what type of experience you’re after.

Not all treks are as difficult as Mt Everest – there are many easy treks in Nepal which range from short walks, to those that only last for a few days. These treks can be easily attempted by anyone of almost any age.

There are of course difficult and highly challenging treks in Nepal that require prior experience and a certain level of physical fitness. The most demanding trekking is anything that involves a mountain expedition, and if you’re planning on this type of experience we highly recommend making sure you have the required training and knowledge.

Due to the variety of trekking in Nepal, it’s also important to make sure you have the right equipment – research your specific hike, and confirm if you’ll need equipment like hiking poles, sleeping bags, 2 person backpacking tents, hiking boots, etc.

Of these, 238 peaks are permitted by the government for peak climbing. Nepal offers expeditions to several peaks including Mt. Everest, Kanchenjunga, Mera Peak, Pisang Peak etc. As peak climbing truly requires an adventurous soul and a daring spirit, Nepal attracts flocks of adventurers/climbers from all over the world.

Peak climbing is an extreme adventure that gives you the sensation of a life-time achievement. It requires extreme physical endurance and strong determination to conquer the summit of a mountain. Technical knowledge is also equally important to successfully make it to the top and return back safely.

Bungee jumping is another exceptionally famous adventure in Nepal. The most exciting jump is a3 hour drivefrom Kathmandu close to the Tibetan outskirts; a bridge based on a gap at a 160 m with the Bhotekoshi River underneath.

The other bungee spot in Nepal is in Pokhara, which is more frequented by travelers because of its accessibility, though isn’t as high as that of Bhotekoshi.

Not all travelers head to Africa for safari – Nepal is known for vibrant tropical jungles which consist of various species of exotic animals, and watching the fascinating behavior and observing these incredible creatures in their natural habitat is truly an adventure.

National Parks in Nepal preserve the country’s rich ecology and wildlife, and there are numerous safaris to choose from. You can hope to spot elephants, tigers, rhinos, crocodiles, and an abundance of bird life when you safari in Nepal.

Fun fact: Nepal has the tallest, longest and steepest zipline in the world! The Zip Flyer is known for being the most extreme zip line experience. It is 1.8km in length with an incline of 56 degrees and a vertical drop of 600 meters.

The adrenaline rush of diving towards the ground before flying forwards over the breath-taking landscapes is truly something else. This is an activity that is great fun in many locations around the world, but once again, Nepal takes it to a completely different level.

One of the fun and exciting activities in Nepal is rafting. You can find white water rapids in locations such as Trishuli, Karnali, Kali Gandaki, Sunkosi, Seti, Bhote Kosi, and several others. Along most popular rivers in Nepal, there will be rafting tours offered.

Nepal has some of the wildest rivers in the world, so rafting tours are a great way to feel adventurous. And there are plenty of different tour options, from single day trips, to those that incorporate overnight stays in rural lodges.

If you’re seeking a water adventure with a little less adrenaline than rafting, Nepal offers a great landscape for a unique fishing experience. There are many amazing lakes and rivers throughout Nepal with nearly 185 species of fish, and the country has become quite established in the world of fishing!

With beautiful rivers like Karnali, Babai, Rapti, Narayani, and Bhote Kosi, as well as the lakes around Pokhara, you can expect to catch catfish, Murrie, rainbow, and common trout. In the Karnali river specifically, a beautiful fish species called Golden Mahseer is found.