A Travel Price Comparison for Families, Couples, and Backpackers Asuncion vs. Montanita for Vacations, Tours, and Honeymoons

Should you visit Asuncion or Montanita?

If you're trying to decide where to visit between Asuncion or Montanita, this travel comparison, which includes costs, can help. The overall cost of travel is usually a consideration when deciding where to go next, and the cost comparison down below can help you decide based on the average prices from other travelers along with your own travel budget.

Where Should I go: Asuncion or Montanita?

Montanita is a small village located on Manglaralto parish along the southern coast of Ecuador. The Pacific Coast of Ecuador is lined with beach towns, either small villages with local fisherman or larger towns more set up for foreign travellers like Montanita. With one of the best beaches in Ecuador, one of the best surf breaks in the region, and a great laid-back atmosphere Montanita is a great little getaway, especially for the hippies of the world. It has also become a popular weekend destination for English teachers and Spanish students coming from Guayaquil and Quito. The beachfront village of Montanita has a laid-back atmosphere and steady stream of cosmopolitan backpackers, with as many South Americans as gringos.

Which city is cheaper, Montanita or Asuncion?

The average daily cost (per person) in Asuncion is $54, while the average daily cost in Montanita is $77. These costs include accommodation (assuming double occupancy, so the traveler is sharing the room), food, transportation, and entertainment. While every person is different, these costs are an average of past travelers in each city. What follows is a categorical breakdown of travel costs for Asuncion and Montanita in more detail.

Compare Hotels in Asuncion and Montanita

Looking for a hotel in Asuncion or Montanita? Prices vary by location, date, season, and the level of luxury. See below for options and compare which is best for your budget and travel style.

Is it cheaper to fly into Asuncion or Montanita?

Prices for flights to both Montanita and Asuncion change regularly based on dates and travel demand. We suggest you find the best prices for your next trip on Kayak, because you can compare the cost of flights across multiple airlines for your prefered dates.

When we compare the travel costs of actual travelers between Asuncion and Montanita, we can see that Montanita is more expensive. And not only is Asuncion much less expensive, but it is actually a significantly cheaper destination. So, traveling to Asuncion would let you spend less money overall. Or, you could decide to spend more money in Asuncion and be able to afford a more luxurious travel style by staying in nicer hotels, eating at more expensive restaurants, taking tours, and experiencing more activities. The same level of travel in Montanita would naturally cost you much more money, so you would probably want to keep your budget a little tighter in Montanita than you might in Asuncion.


When is the best time to visit Asuncion or Montanita?

Asuncion has a temperate climate with four distinct seasons, but Montanita experiences a tropical climate with fairly warm weather most of the year.

Should I visit Asuncion or Montanita in the Summer?

The summer attracts plenty of travelers to both Asuncion and Montanita. Montanita attracts visitors year-round for its warm weather and tropical climate.

In January, Asuncion is generally a little warmer than Montanitain July. Temperatures in Asuncion average around 29°C (84°F), and Montanita stays around 25°C (78°F).

In Asuncion, it's very sunny this time of the year. Asuncion usually receives more sunshine than Montanita during summer. Asuncion gets 249 hours of sunny skies, while Montanita receives 107 hours of full sun in the summer.

Asuncion gets a good bit of rain this time of year. In January, Asuncion usually receives more rain than Montanitain July. Asuncion gets 150 mm (5.9 in) of rain, while Montanita receives 10 mm (0.4 in) of rain each month for the summer.

Should I visit Asuncion or Montanita in the Autumn?

The autumn brings many poeple to Asuncion as well as Montanita. The warm tropical climate attracts visitors to Montanita throughout the year.

In the autumn, Asuncion often gets more sunshine than Montanitain October. Asuncion gets 199 hours of sunny skies this time of year, while Montanita receives 117 hours of full sun.

Asuncion receives a lot of rain in the autumn. Asuncion usually gets more rain in April than Montanitain October. Asuncion gets 150 mm (5.9 in) of rain, while Montanita receives 3 mm (0.1 in) of rain this time of the year.

Should I visit Asuncion or Montanita in the Winter?

Both Montanita and Asuncion are popular destinations to visit in the winter with plenty of activities. Plenty of visitors come to Montanita because of the warm tropical climate that lasts throughout the year.

In the winter, Asuncion is cooler than Montanita. Typically, the winter temperatures in Asuncion in July are around 19°C (66°F), and Montanita is about 27°C (80°F)in January.

Asuncion usually receives more sunshine than Montanita during winter. Asuncion gets 191 hours of sunny skies, while Montanita receives 88 hours of full sun in the winter.

In July, Asuncion usually receives less rain than Montanitain January. Asuncion gets 30 mm (1.2 in) of rain, while Montanita receives 78 mm (3.1 in) of rain each month for the winter.

Should I visit Asuncion or Montanita in the Spring?

Both Montanita and Asuncion during the spring are popular places to visit. Montanita attracts visitors year-round for its warm weather and tropical climate.

In October, Asuncion is generally around the same temperature as Montanitain April. Temperatures in Asuncion average around 25°C (77°F), and Montanita stays around 27°C (81°F).

It's quite sunny in Asuncion. In the spring, Asuncion often gets more sunshine than Montanitain April. Asuncion gets 206 hours of sunny skies this time of year, while Montanita receives 133 hours of full sun.

Typical Weather for Montanita and Asuncion 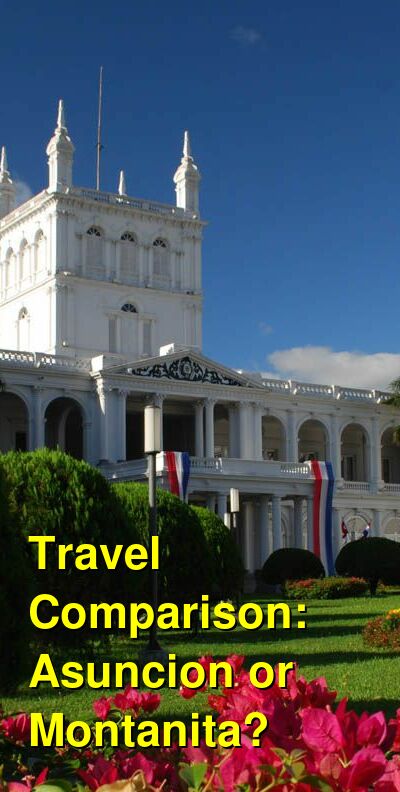