How much does it cost to travel to Guayaquil?

How much money will you need for your trip to Guayaquil? You should plan to spend around $76 per day on your vacation in Guayaquil, which is the average daily price based on the expenses of other visitors. Past travelers have spent, on average, $23 on meals for one day and $12 on local transportation. Also, the average hotel price in Guayaquil for a couple is $51. So, a trip to Guayaquil for two people for one week costs on average $1,059. All of these average travel prices have been collected from other travelers to help you plan your own travel budget.

A vacation to Guayaquil for one week usually costs around $529 for one person. So, a trip to Guayaquil for two people costs around $1,059 for one week. A trip for two weeks for two people costs $2,117 in Guayaquil. If you're traveling as a family of three or four people, the price person often goes down because kid's tickets are cheaper and hotel rooms can be shared. If you travel slower over a longer period of time then your daily budget will also go down. Two people traveling together for one month in Guayaquil can often have a lower daily budget per person than one person traveling alone for one week.


How expensive is Guayaquil? How much money do I need for Guayaquil?

How much does a trip to Guayaquil cost? Is Guayaquil expensive? The average Guayaquil trip cost is broken down by category here. All of these Guayaquil prices are calculated from the budgets of real travelers.

Looking for a hotel in Guayaquil? Prices vary by location, date, season, and the level of luxury. See below for options.

How much does it cost to go to Guayaquil? Naturally, it depends on the dates. We recommend Kayak because they can find the best deals across all airlines.

The price of renting a car in Guayaquil will depends on dates, the type of car, the location, and your age. We recommend Kayak because they can find the best deals across all car rental companies.

Tips and Handouts Budget in Guayaquil

Guayaquil On a Budget 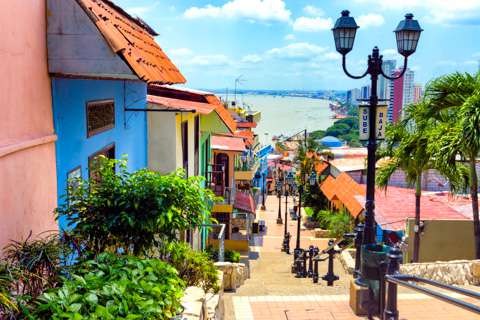 Guayaquil, Ecuador
Guayaquil is Ecuador's largest city and seaport. From a tourist perspective, the city acts primarily as a transportation gateway to the country and the Galapagos Islands. While the city can be skipped altogether, should you have a free day to spend here, there are a few noteworthy things to do, as well as some terrific dining and nightlife options. Guayaquilâs main tourist attraction is Las Penas, a hill with old, colorfully painted buildings at the north end of the Malecon, where you can walk the 400 steps to the lighthouse at the top for good views of the city. The neighborhood is filled with cafes, bars, restaurants, and art galleries and is relatively safe. Other important sights include the Malecon 2000, a massive urban development project that has brought new life to the riverside in the city center and the Parque Seminario, filled with fountains, trees and iguanas, located at 10 de Agosto Ave and Chile Ave.

The city center area is filled with hotels, restaurants, museums, churches, parks and beautiful architectural sites. From Hemiciclo La Rotonda, you can head up to 9 de Octubre Ave and visit Iglesia San Francisco. Near the church, on Pedro Carbo Ave. and you will find Nahim IsaÃ­as Museum, The City Hall and Municipal Palace. You can also walk to the nearby intersection at Clemente Ballen Avenue and Chimborazo Avenue, and visit Catedral Metropolitana de Guayaquil constructed in a neo-gothic style in the 1930s. Stroll along the Parque Seminario, which has a large number of iguanas climbing around the bushes and trees or walking leisurely on the ground. These friendly animals are not the same marine specie from the Galapagos. They measure around 4 to 5 feet and they usually let you touch them. Finally head to 9 de Octubre Avenue to get a glimpse of the life on the most important street of Guayaquil filled with restaurants, business, banks, hotels, etc. Make sure to stop by at Parque Centenario and visit Museo Presley Norton before heading to Malecon Salado, a pier and linear park with large green areas. You can rent rowboats, enjoy the Fuente del Agua Danzante and eat typical food. From the Malecon Salado boardwalk, you can get to Urdesa, one of most popular restaurant and bar zones of Guayaquil.

Visit Cerro Santa Ana, a hill with colorful colonial houses, where the city was first founded in 1547. There are 444 steps to climb to the top of the hill. However it may take you more time than you thought to get to the top as there are lots of coffee houses, art galleries and artisan shops for you to stop and browse. Once you get to the top, enjoy amazing views of Guayaquil, climb the lighthouse âEl Faroâ, visit a fort, a museum and the Santa Ana Chapel. Adjacent to Cerro Santa Ana is the Barrio Las PeÃ±as, the oldest neighborhood of Guayaquil and the home of famous Ecuadorian poets and intellectuals. Walk along the cobbled street "Numa Pompillo Llona", where you will find restored houses from the colonial times, art galleries and restaurants. The boardwalk between Cerro Santa Ana and the Guayas River is called MalecÃ³n 2000, one of the most iconic sights of Guayaquil that stretches 1.5 miles. It is dotted with entertainment, food shops, gardens, fountains, sculptures and monuments. At the northern end of MalecÃ³n 2000, visit the Museo AntropolÃ³gico y de Arte ContemporÃ¡neo, the beautiful gardens filled with local botanic species, and Guayaquil City Museum. The iconic monument of Guayaquil, La Rotonda, is a stunning piece of art on MalecÃ³n 2000 that commemorates the meeting of the two liberators: Simon Bolivar and Jose San Martin in 1822. The beautiful Moorish Clock is also found at this place and is another important monument. At the southern end of MalecÃ³n 2000, you will find a shopping center and the Henry Morgan ship, a pirate ship that tours through the Guayas River and gives you beautiful views of the Santa Ana Port, Las PeÃ±as, Malecon 2000 and Santay Island. Make sure to get a tour around 18h30 so that you enjoy the sunset. The Morgan ship also has a bar and a restaurant.

Visit Santay Island, a protected area known for its diverse fauna and flora that features an eco village. The island is home to 85 bird species, 12 reptiles and a crocodile station. You can get to the island by foot on a 15 minute walk, by renting a bicycle for about USD$4 or by a small boat, which departs from Malecon 2000 by the Yatch Club area. The entry to the island is free. Another great activity in Guayaquil is to get a taxi at a cost of USD$10 and cross over the Rafael Mendoza Bridge to SamborondÃ³n to visit Parque HistÃ³rico. It is a gorgeous place where history, culture and nature meet. The park is divided into three zones: wildlife, as you immerse yourself in the natural diversity of the region, urban architecture, with historical buildings from the late 19th century and traditions, providing an opportunity to learn more about the customs and traditions of this region of Ecuador. You can get English speaking headphones to guide you through the park at a cost of USD$5 for up to 2 visitors. The entry to the park is free.

As Ecuador's largest city, it shouldnât be surprising that some of the best food in the country can be found in Guayaquil. The city has no shortage of restaurants to suit all budgets. The big shopping centres like Mall del Sol feature huge food courts with dozens of familiar international fast-food chains. However, it isnât the international cuisine that grabs the attention but the excellent local dishes that are found on just about every street corner. A coastal favorite throughout Latin America is ceviche, which consists of raw seafood marinated in citrus juices. Churrasco is a grilled steak seasoned with chimichurri, and served along with plantains, rice, French fries, a fried egg, and avocado. Encebollado is a fish stew containing cassava and red onion and the famous Pan de Yuca is a bread made of cassava starch and cheese.

The Jose Joaquin de Olmedo International Airport (GYE) is one of the best in South America, and has all the necessary amenities to ensure your comfort. The airport is located in the northeast part of the city, adjacent to the new international bus terminal. Taxis to the northern suburbs, or the hotels near the Malecon, cost between USD$3 and $5. If you are entering Ecuador through Guayaquil, the Immigration and Customs process is organized and efficient. Flights are available to and from a variety of major cities throughout North and South America. Guayaquil's bus station is very well-organized, and easy to get around. Ticket booths for the buses are located on the first floor, along with a mall. Departures occur on the 2nd and 3rd floors. Buses leave for cities around the country day and night. The bigger the city, the more frequent the departures and buses to and from Quito and Cuenca depart hourly. A direct bus to Cuenca is USD$8.25 and takes about 3h30. A direct bus to Montanita is USD$6 and takes around 2h30.