A Travel Price Comparison for Canada Calgary vs. Montreal for Vacations, Tours, and Honeymoons

Should you visit Calgary or Montreal?

Trying to figure out where to travel next? This travel cost comparison between Calgary and Montreal can help. For many travelers, the cost of a destination is a primary consideration when choosing where to go.

While Quebec City is the political capital of Quebec Province, Montreal is the economic and cultural capital. It's also the second largest city in Canada, with a population of about 1.9 million and 4 million in the metropolitan area. It's the second largest French speaking city in the world behind Paris.

Montreal is a very trendy and vibrant city with an active nightlife and countless activities to enjoy. It's located on an island in the St. Lawrence River and has a humid continental climate. There are four distinct seasons. Summers are warm or hot and humid. Spring and fall are mild and winters are cold and snowy. You can expect about 2 meters of snow every year, but there are also more than 2,000 hours of sunshine annually.

Which city is cheaper, Montreal or Calgary?

The average daily cost (per person) in Calgary is $134, while the average daily cost in Montreal is $180. These costs include accommodation (assuming double occupancy, so the traveler is sharing the room), food, transportation, and entertainment. While every person is different, these costs are an average of past travelers in each city. Below is a breakdown of travel costs for Calgary and Montreal in more detail.

Double occupancy rooms typically run around $224 in Montreal For nicer amenities and a premiere location, you can expect to pay a bit more.

In Calgary travelers spend around $27 a day on food. You can save money by choosing casual restaurants or food stalls, or you can spend plenty more by dining in nicer restaurants at every meal.

Food in Montreal costs travelers about $32 per day on average. Restaurants can vary significantly in price, so choose wisely if you're trying to save money. Fast food and street stalls are typically your cheapest options, which sit down restaurants can be significantly more expensive.

Here are some examples of typical meal expenses from previous travelers to Montreal:

For Montreal, here are some samples of tours and activities related to meals and dining experiences:

Montreal's transportation costs can vary by the type of transport chosen by visitors. Naturally, taxis and private drivers cost much more than public transportation options. On average, visitors spend $18 per person, per day on transportation in Montreal.


Hired Cars and Shuttles in Calgary

Hired Cars and Shuttles in Montreal

Also for Montreal, here are a few examples of actual transportation services:

Is it cheaper to fly into Calgary or Montreal?

Prices for flights to both Montreal and Calgary change regularly based on dates and travel demand. We suggest you find the best prices for your next trip on Kayak, because you can compare the cost of flights across multiple airlines for your prefered dates.

Calgary's costs for entertainment, tickets, attractions, and tours will often cost around $14 per person, per day. This cost can vary widely by the type of activity, however, as this includes admission tickets, day tours, museums, and other things to do.

Sightseeing, admission tickets, things to do, and other entertainment expenses in Montreal can vary widely by price. On average, visitors spend around $18 per person, per day on entertainment and sightseeing here.

For Montreal, here are some examples of average entertainment and activity prices from previous travelers:

Tours and Activities in Montreal

Also, here are some specific examples of entertainment, tickets, and activities for Montreal.

While the amount that someone spends on alcohol while visiting Calgary may vary from person to person, on average a person spends $9.63 per day on alcoholic beverages.

Alcoholic beverages can often be a significant portion of a traveler's budget, and the costs can vary greatly from person to person. In Montreal, the average amount that a visitor spends on alcoholic beverages per day is $14.


Sample the Local Flavors in Calgary

Below are a few samples from actual travelers for alcohol and nightlife costs in Montreal:

Sample the Local Flavors in Montreal

Here are a few nightlife and alcohol tours and activities from local tour providers in Montreal:

When we compare the travel costs of actual travelers between Calgary and Montreal, we can see that Montreal is more expensive. And not only is Calgary much less expensive, but it is actually a significantly cheaper destination. So, traveling to Calgary would let you spend less money overall. Or, you could decide to spend more money in Calgary and be able to afford a more luxurious travel style by staying in nicer hotels, eating at more expensive restaurants, taking tours, and experiencing more activities. The same level of travel in Montreal would naturally cost you much more money, so you would probably want to keep your budget a little tighter in Montreal than you might in Calgary. 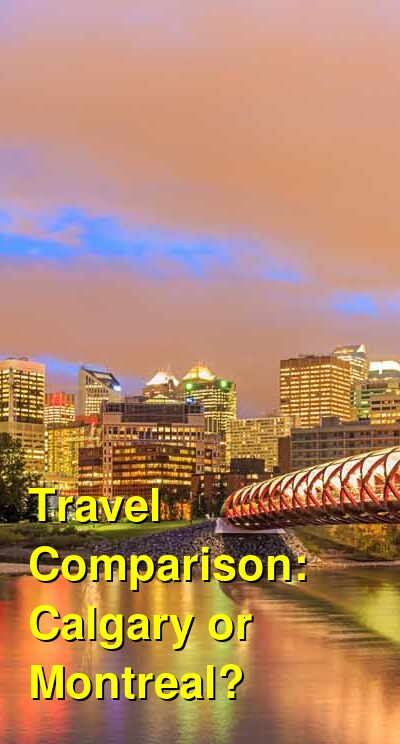