How much does it cost to travel to Edmonton?

How much money will you need for your trip to Edmonton? You should plan to spend around CA$198 ($148) per day on your vacation in Edmonton, which is the average daily price based on the expenses of other visitors. Past travelers have spent, on average, CA$17 ($13) on meals for one day and CA$87 ($65) on local transportation. Also, the average hotel price in Edmonton for a couple is CA$223 ($167). So, a trip to Edmonton for two people for one week costs on average CA$2,766 ($2,074). All of these average travel prices have been collected from other travelers to help you plan your own travel budget.

A vacation to Edmonton for one week usually costs around CA$1,383 for one person. So, a trip to Edmonton for two people costs around CA$2,766 for one week. A trip for two weeks for two people costs CA$5,532 in Edmonton. If you're traveling as a family of three or four people, the price person often goes down because kid's tickets are cheaper and hotel rooms can be shared. If you travel slower over a longer period of time then your daily budget will also go down. Two people traveling together for one month in Edmonton can often have a lower daily budget per person than one person traveling alone for one week.


How expensive is Edmonton? How much money do I need for Edmonton?

How much does a trip to Edmonton cost? Is Edmonton expensive? The average Edmonton trip cost is broken down by category here. All of these Edmonton prices are calculated from the budgets of real travelers.

Looking for a hotel in Edmonton? Prices vary by location, date, season, and the level of luxury. See below for options.

How much does it cost to go to Edmonton? Naturally, it depends on the dates. We recommend Kayak because they can find the best deals across all airlines.

The price of renting a car in Edmonton will depends on dates, the type of car, the location, and your age. We recommend Kayak because they can find the best deals across all car rental companies.

What did other people spend on Food in Edmonton?

Typical prices for Food in Edmonton are listed below. These actual costs are from real travelers and can give you an idea of the prices in Edmonton, but your costs will vary based on your travel style.

Edmonton On a Budget 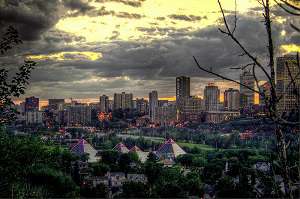 Edmonton, Alberta, Canada
The capital of Alberta, Canada, Edmonton has a population of just over one million people in its metropolitan area. It is also North America's northernmost city of this large size. It's a beautiful place to visit because of the North Saskatchewan River Valley which has over one hundred kilometers of hiking trails, wildlife spotting, and overlooks. The valley has a string of parks which are wonderful to visit. In addition to the beautiful outdoor setting and activities, Edmonton also offers the largest shopping mall in North America, West Edmonton Mall. It's also a city with a lot of culture including a lively theater scene, many different festivals, and no shortage of sporting events that you could attend.

Some of the more popular sights around town include the Alberta Legislature, the Art Gallery of Alberta, the Royal Alberta Museum, Fort Edmonton Park, Elk Island National Park of Canada, the Ukrainian Cultural Heritage Village, and seeing the Aurora Borealis or northern lights.

Elk Island National park has the highest density of hoofed mammals per square km for any wild area, with the exception of the Serengeti Plains of Africa. The park is 20 minutes to the east of the city and is a great place to see wood bison, elk and moose. There are also more than 250 species of birds.

Another interesting place to visit is the Ukrainian Cultural Heritage Village. It's located about 25 minutes east of the city and is near the Elk Island National Park. This is a historic site that highlights Ukrainian settlements in East Central Alberta. The site has more than 30 historic buildings including three churches, a grain elevator, a blacksmith shop and a sod hut.

Hotels are spread throughout the city but you'll find the highest concentration of budget options on either the south side of the city or in the deep east central area. There are also some budget hotels further out in the suburbs.

During the summer months, Edmonton hosts a wide variety of festivals. The city has a lively performing arts scene and there are many hiking trails and natural areas that you can explore in the nearby areas. Hiking, biking, and cross country skiing are all popular activities. During the summer months there are also a decent number of golf courses that you can play on. There are three public courses in the city limits and several outside of town as well.

Dining in Edmonton is relatively diverse, but you'll find most of the restaurants in one of two areas. The downtown area has both chain and local restaurants and is a good place to explore if you're looking for interesting food. Also head to Whyte Avenue which has some interesting restaurants. West Edmonton Mall is another good place to hit up for a meal.

There is a diversity of food options with a good representation of ethnic cuisines. Options include Ethiopian, Chinese, Japanese, Thai, and Italian, among many others.

The oldest part of the city is laid out like a grid. The streets are straight and it is easy to orient yourself. The city has a relatively reliable and inexpensive public transit system. There are hundreds of buses that travel on different routes throughout the city. You can use buses to access most destinations. They travel most frequently, every fifteen minutes, during peak hours, and then the frequency drops to every half hour. The city also has a light rail system. The line runs from Clareview Station in the northeast to Century Park Station passing by the University of Alberta's main and south campuses.

Edmonton Airport has flights to major cities around the world. The airport is located on the south side of the city and has several public transportation options, as well as private shuttle services. If you are looking for private transportation while in the area, you can rent limousines in Edmonton from AM PM Limo starting at $99.