How much does it cost to travel to Ottawa?

How much money will you need for your trip to Ottawa? You should plan to spend around CA$135 ($99) per day on your vacation in Ottawa, which is the average daily price based on the expenses of other visitors. Past travelers have spent, on average, CA$19 ($14) on meals for one day and CA$7.95 ($5.84) on local transportation. Also, the average hotel price in Ottawa for a couple is CA$40 ($29). So, a trip to Ottawa for two people for one week costs on average CA$1,886 ($1,386). All of these average travel prices have been collected from other travelers to help you plan your own travel budget.

A vacation to Ottawa for one week usually costs around CA$943 for one person. So, a trip to Ottawa for two people costs around CA$1,886 for one week. A trip for two weeks for two people costs CA$3,771 in Ottawa. If you're traveling as a family of three or four people, the price person often goes down because kid's tickets are cheaper and hotel rooms can be shared. If you travel slower over a longer period of time then your daily budget will also go down. Two people traveling together for one month in Ottawa can often have a lower daily budget per person than one person traveling alone for one week.


How expensive is Ottawa? How much money do I need for Ottawa?

How much does a trip to Ottawa cost? Is Ottawa expensive? The average Ottawa trip cost is broken down by category here. All of these Ottawa prices are calculated from the budgets of real travelers.

Looking for a hotel in Ottawa? Prices vary by location, date, season, and the level of luxury. See below for options.

How much does it cost to go to Ottawa? Naturally, it depends on the dates. We recommend Kayak because they can find the best deals across all airlines.

The price of renting a car in Ottawa will depends on dates, the type of car, the location, and your age. We recommend Kayak because they can find the best deals across all car rental companies.

Tips and Handouts Budget in Ottawa

Ottawa On a Budget 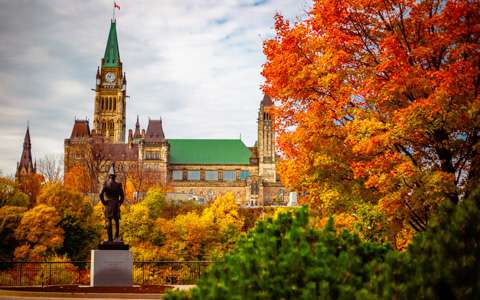 Ottawa, Canada
Ottawa is the capital city of Canada, located on the Ontario side of the Ottawa River. A city of many ethnic populations, Ottawa is uniquely bilingual with English as the first language of the population's majority and French as a close second.Â  It is best known as the nation's capital, which is centered on Parliament Hill, an architectural landmark as well as the seat of government.

The primary attraction for most visitors to Ottawa is Parliament Hill. Not only is it a striking monument of Gothic revival architecture, but it is also the home of Canada's national government and the setting for national celebrations year-round. Various tours are available to different parts of Parliament Hill, while visitors also flock to see the daily Changing of the Guard ceremony at 9:00 AM, as well as the Sound and Light Show held daily at 9:30 PM until September.

Ottawa is also home to a vast array of museums and galleries showcasing the nation's story in art, history, nature, at war, in aviation and space, agriculture and food, science, and technology. A few of the more popular museum attractions include the Canadian War Museum, Canadian Museum of History, Canadian Museum of Nature, Science and Technology Museum, and the Canada Agriculture Museum.

Other must-see sights include the historic ByWard Market and the Rideau Canal, as well as its many performing arts venues like the National Arts Centre, the Great Canadian Theatre Company, Ottawa Little Theatre, and The Gladstone.

A few of Ottawa's many distinctive neighborhoods include Bank Street, ByWard Market, Chinatown, Downtown Rideau, Glebe, Preston Street (Little Italy), Sparks Street, Wellington West, and Westboro Village. Bank Street is the downtown center of commerce, government, culture, and leisure.Â  ByWard Market, founded in the 1820's, is home to unique shops, fresh produce and artisan stalls, restaurants, and nightclubs. Chinatown is a thriving business and residential area that offers dining, shopping, and entertainment infused with Chinese, Korean, Thai, Vietnamese, Indian, Philippino, Spanish, Lebanese, French, and Middle Eastern cultures. Downtown Rideau makes up the arts, fashion, and theatre district. The Glebe is a relaxed and historic neighborhood of shops, restaurants, and pubs. Preston Street is the heart of Little Italy, reflecting Italian heritage in its tree-lined streets, award-winning Italian and international cuisine, and independent boutiques. Sparks Street is home to a mix of long-established local business, unique architecture, and Canada's first pedestrian mall. And finally Wellington West and Westboro Village are both urban villages 5-10 minute's-drive from Parliament buildings, each of which features more than 200 shops, restaurants, and businesses.

There are plenty of tours and sightseeing options available for experiencing the city of Ottawa-from options on foot, bicycle, or bus, to boat, plane, or helicopter. Tours can be booked on any mode of transportation to experience any unique part of the city by location, history, culinary preference, and more.

Alternatively visitors can explore galleries and museums, experience the music and theatre culture, or venture on the outskirts of the city for some outdoor excursions like whitewater rafting on the Ottawa River.

Since Ottawa's culture is a reflection of the thousands of immigrants who now call the city home, ethnic foods from around the world are available at a wide variety of restaurants and street vendors. Additionally, there is a hub for each kind of cultural cuisine. Chinatown area, for example, has plenty of Chinese and other Asian food restaurants and is located along Somerset Avenue between Bronson Avenue and Preston Street.Â  For Italian eats, Little Italy runs along the length of Preston Street, from Carling Avenue to Albert Street. Additionally, the ByWard Market area has a wide selection of different cuisines-from breakfast diners and lunchtime delis to ethnic Mexican or Indian eats. One local novelty, however, is the beavertail-a large, flat doughy, deep-fried pastry usually topped with cinnamon and sugar. Also popular, and located on just about every street corner, is the Tim Horton's fast food chain, best known for its coffee and donuts.

To reach downtown Ottawa via public transit from the airport, take the #97 bus (the only bus at the airport) and get out at the Mackenzie King stop (14 stops away) at the Rideau Centre shopping mall.