A Travel Price Comparison for Vacations, Tours, and Honeymoons Flores vs. Managua

Should you visit Flores or Managua?

Trying to figure out where to travel next? This travel cost comparison between Flores and Managua can help. For many travelers, the cost of a destination is a primary consideration when choosing where to go.

The town of Flores is located in Peten, Guatemala. The main hub is located on an island on Lago Peten Itza, which is connected to the mainland by a causeway. On the other side of the causeway are the towns of Santa Elena and San Benito, however, all three are often referred to as Flores. Most people visit the area for its proximity to the ancient Mayan ruins of Tikal, though the town itself is also charming with colonial buildings and historic churches lining the cobbled streets.

Managua is the capital, and largest city in Nicaragua. The economy is generally centered around the trade of coffee, cotton, and other types of agriculture. It also is a textile capital for the area. Managua is also a very reasonably priced destination in Central America. Restaurants and hotels are quite affordable and you'll find all kinds of international cuisine around the city. Transportation is also incredibly affordable and you'll find yourself pleasantly surprised at the cost of intercity bus rides.

Which city is cheaper, Managua or Flores?

The average daily cost (per person) in Flores is $26, while the average daily cost in Managua is $13. These costs include accommodation (assuming double occupancy, so the traveler is sharing the room), food, transportation, and entertainment. While every person is different, these costs are an average of past travelers in each city. Below is a breakdown of travel costs for Flores and Managua in more detail.

Travelers usually pay around $14 for a double occupancy room in Flores If you want to be in a premiere location or have high end amenities, you can expect to pay a bit more.

Double occupancy rooms typically run around $12 in Managua For nicer amenities and a premiere location, you can expect to pay a bit more.

While meal prices in Flores can vary, the average travelers spends about $10 per day on food. Based on the spending habits of previous travelers, when dining out, an average meal in Flores should cost around $4.00 per person. Breakfast prices are usually a little cheaper than lunch or dinner. The price of food in sit-down restaurants in Flores is often higher than fast food prices or street food prices.

In Managua travelers spend around $5.40 a day on food. You can save money by choosing casual restaurants or food stalls, or you can spend plenty more by dining in nicer restaurants at every meal.

To get around in Flores, the average visitor spends $6.33 per day, per person. This includes the costs of taxi rides and private drivers as well as public transportation, which tends to be much more affordable.

To get around in Managua, the average visitor spends $1.43 per day, per person. This includes the costs of taxi rides and private drivers as well as public transportation, which tends to be much more affordable.


Hired Cars and Shuttles in Flores

Also for Flores, here are a few examples of actual transportation services:

Hired Cars and Shuttles in Managua

Also for Managua, here are a few examples of actual transportation services:

In Flores, the costs for things to do, activities, admission tickets, and other sightseeing expenses are on average $16 per person, per day.

In Managua, the costs for things to do, activities, admission tickets, and other sightseeing expenses are on average $0.62 per person, per day.

Below are a few sample prices from actual travelers for Flores's activities, tours, and tickets:

Tours and Activities in Flores

For Flores, here are a few prices for actual activities, tours, and tickets provided by various companies:

Tours and Activities in Managua

Also, here are some specific examples of entertainment, tickets, and activities for Managua.

Some typical examples of the costs for nightlife and alcohol in Flores are as follows:

Sample the Local Flavors in Managua

Some specific costs for nightlife related activities in Managua:


When we compare the travel costs of actual travelers between Flores and Managua, we can see that Flores is more expensive. And not only is Managua much less expensive, but it is actually a significantly cheaper destination. So, traveling to Managua would let you spend less money overall. Or, you could decide to spend more money in Managua and be able to afford a more luxurious travel style by staying in nicer hotels, eating at more expensive restaurants, taking tours, and experiencing more activities. The same level of travel in Flores would naturally cost you much more money, so you would probably want to keep your budget a little tighter in Flores than you might in Managua. 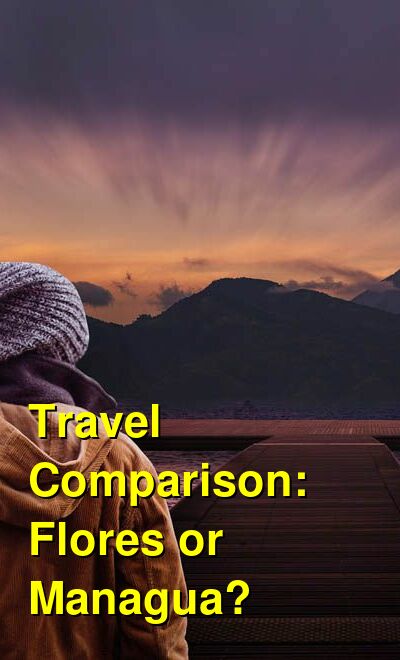