A Travel Comparison for Vacations, Honeymoons, and Tours Ireland vs. Lithuania

Should you visit Ireland or Lithuania?

Ireland and Lithuania are two very different countries. Ireland is a popular tourist destination with a lot to see and do, but it's also an expensive country to visit. Lithuania is much more off the beaten path, but there are many hidden gems throughout. Lithuania is also much more affordable than Ireland.

Lithuania is in the Baltics, which is a fascinating and affordable part of Europe. The top tourist destination is the capital city of Vilnius, which is a beautiful place to visit. Vilnius has a very genuine feel and it is far less touristy than many cities in Europe. The food and beer is delicious and it's not hard to find affordable places to eat and sleep. Lithuania also has a lot of natural beauty and there are many lakes and villages worth exploring. Famous sights include the Hill of Crosses and the Curonian Spit.

Ireland is known for its beautiful countryside and friendly people. It's a popular country to visit and it's not hard to see why. Whether you're exploring Dublin or heading to more rural areas, you will likely be greeted with warm smiles.

Which country is cheaper, Lithuania or Ireland?

Should I visit Ireland or Lithuania? This is a popular question for many travelers. By figuring out which country is more expensive, you'll understand where you'll get more bang for your buck. A week in Lithuania can cost you about €515 (per person), while a week in Ireland may cost you around €766. These differences become even more noticable if you plan to spend a longer time in the country. 10 days, two weeks, or even one month of travel to Lithuania or Ireland can really add to your travel budget.

When comparing food in Ireland vs. Lithuania they are not just different in cuisine, but also in price. Meal and restaurant costs in Ireland (€32) are often cheaper than Lithuania (€29).


How much are flights to Ireland and Lithuania?


Find a Hostel in Ireland or Lithuania

When is the best time to visit Ireland and Lithuania?

Galway, Ireland
Ireland has unpredictable weather that can change several times within the same day. Make sure you come prepared for rain, regardless of when you visit and pack accordingly. In general, the sunniest months are April, May, and June. July and August are the warmest months, and the southeast area usually sees the most sun. December and January are the rainiest months and weather is usually the dampest along the west coast, which borders the Atlantic Ocean.

Lithuania is best visited during the warmer months from late spring through summer. This is when the weather is most pleasant and it's a nice time to be outside. The summers are short though, with temperatures starting to cool off as early as the beginning of September. Fall can be a beautiful time of year but expect colder temperatures. Snow can fall as early as mid November and as winter progresses it can become quite frigid. Many tourist facilities close in the fall months and don't reopen again until April or sometimes May.

Why is Ireland more expensive than Lithuania?

The cost of living in Lithuania is more affordable than many places in Europe, including Ireland. There are many budget restaurants where you can get a filling meal for a very reasonable price. There is decent transportation to many of the most popular places and the prices are very affordable. Hotels and hostels are also quite cheap.

Ireland has a much higher cost of living than Lithuania. Many people also rent a car while they're visiting the country. This can be an expensive way to explore the countryside, but it is also very rewarding.

What are the most expensive and cheapest cities and regions in Ireland and Lithuania? 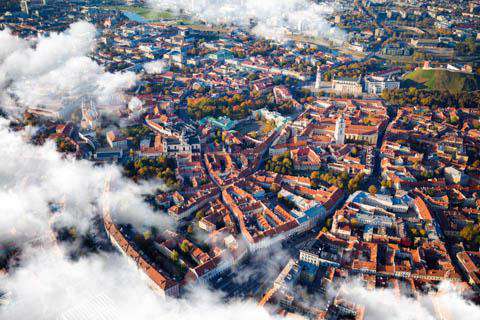 Vilnius, Lithuania
Ireland is an expensive country, but there are also many resources available for tourists. There are a wide variety of hostels, hotels, and bed and breakfasts throughout Ireland so if you're on a tight budget, options are available. The countryside can be an expensive area to explore because you must have access to a car. Rental cars can be expensive though, so plan your trip accordingly.

Vilnius is probably the most expensive part of Lithuania to visit. It is the most popular destination and prices generally reflect that. That being said, smaller towns might be surprisingly expensive because of limited options. During the low season the availability is even less, so you may find yourself paying more than you would in the larger cities.

How you can save money when visiting Ireland and Lithuania?

Like other expensive countries, cooking your own meals can save you a lot of money in Ireland.

Look for a bus. Buses are usually the cheapest form of public transit, so try to find a bus schedule and use that to get around when possible.

Find accommodation in a central location. Whether you're visiting a larger city like Dublin, or a smaller town, having centrally located accommodation can save you a lot of time and money, even if the upfront cost is very expensive.

Eat at local restaurants, particularly near universities. Restaurants that cater to students are usually quite cheap and fast. They offer a local flavor for a fraction of the price you would pay in more touristy areas.