A Travel Price Comparison for Families, Couples, and Backpackers Moscow vs. Beijing for Vacations, Tours, and Honeymoons

Should you visit Moscow or Beijing?

Which city should you visit? Read on to compare the prices of travel for Moscow and Beijing. We’ll break down costs for accommodation, food, transportation and more to help you learn more about these two destinations. Then, you can figure out if either of these two places are accessible based on your travel budget. So, let's dig into it.

Beijing is the capital of China and, with 21.5 million people, it is the second most populated city in the world after Shanghai. It is a city that keeps pockets of its history hidden in old neighborhoods or back alleys, despite the constant change and modernization that goes on around it. As the capital city of China, there is plenty of history and culture. You can still get yourself lost in one of the last remaining hutongs, which are old neighborhoods that remain untouched by the city's modernization. The alleys that weave between the old homes are lined with drying clothes, corner markets, and people going about their daily lives the way they have for centuries. Surrounding these hutongs you'll find modern buildings and a booming economy, all threatening to destroying these last bits of Beijing's history. Beijing offers a glimpse into a microcosm that represents the entire country of China. Make sure you give yourself enough time in China to truly experience Beijing. You can pass a lot of time soaking up life in the city, which remains as diverse as the country it resides within.

Which city is cheaper, Beijing or Moscow?

The average daily cost (per person) in Moscow is $63, while the average daily cost in Beijing is $69. These costs include accommodation (assuming double occupancy, so the traveler is sharing the room), food, transportation, and entertainment. While every person is different, these costs are an average of past travelers in each city. Below is a breakdown of travel costs for Moscow and Beijing in more detail.

In Beijing travelers spend around $19 a day on food. You can save money by choosing casual restaurants or food stalls, or you can spend plenty more by dining in nicer restaurants at every meal.

Below are a few samples from actual travelers for food and meal costs in Beijing:

Also, here are some specific examples of food and dining related activities in Beijing.

While taxis and private drivers typically cost much more than public transportation, people usually spend around $6.87 per day to get around in Beijing.

Here are some examples of typical transportation prices from actual travelers in Beijing:

Hired Cars and Shuttles in Beijing

Some specific examples of transportation prices in Beijing:

Is it cheaper to fly into Moscow or Beijing?

Prices for flights to both Beijing and Moscow change regularly based on dates and travel demand. We suggest you find the best prices for your next trip on Kayak, because you can compare the cost of flights across multiple airlines for your prefered dates.

Activities, things to do, and other forms of entertainment usually cost around $21 per person, per day in Beijing. This cost includes the price of admission tickets to attractions and museums as well as daily tours.

Here are a few typical costs in Beijing for activities, ticket prices, and tours that come from previous visitors:

Tours and Activities in Beijing

Here are a few actual costs in Beijing for available activities, ticket prices, and tours:

While the amount that someone spends on alcohol while visiting Beijing may vary from person to person, on average a person spends $11 per day on alcoholic beverages.

Sample the Local Flavors in Beijing

Here are a few nightlife and alcohol tours and activities from local tour providers in Beijing:

When comparing the travel costs between Moscow and Beijing, we can see that Beijing is more expensive. However, the two cities are actually relatively comparable in price, as the difference is somewhat minimal. Generally, this means that you could travel with generally the same travel style and level of luxury in each place. Even though Moscow is in Europe and Beijing is in Asia, both of these destinations have relatively similar prices of travel. Generally, the levels of luxury and expenses are the same for these cities even though they are geographically far apart. 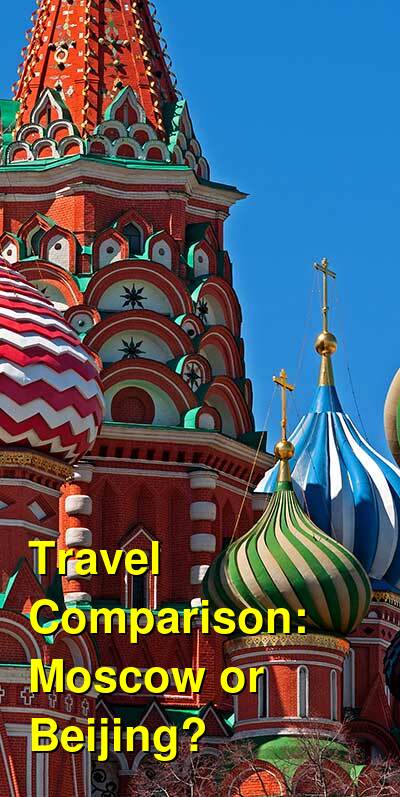