If you're trying to decide where to visit between Serengeti National Park or Tsavo National Park, this travel cost comparison can help. The overall cost of travel is usually a consideration when deciding where to go next, and the cost comparison below can help you decide based on the average prices from other travelers along with your own travel budget.

Sprawling across 5,700 square miles of northern Tanzania in East Africa, Serengeti National Park makes up one of the oldest ecosystems in the world-one whose climate, vegetation, and fauna has barely changed over the past million years.  Today the park is a major wildlife destination, especially during the Great Migration when over a million hoofed animals are on the move.

Tsavo National Park is one of the largest and oldest parks in Kenya, located in the central part of the country in what was once known as the Taru Desert. Human activity in the park dates back to the Late Stone Age making the park a major archaeological and historical site. Tsavo is known for having beautiful natural landscapes and excellent game viewing.

A hotel room in Serengeti National Park is about $100 This assumes double occupancy and modest accommodations.

The average price for accommodation for two people in Tsavo National Park is $62. This is for two people sharing a typical double occupancy hotel room.

Food in Tsavo National Park costs travelers about $36 per day on average. Restaurants can vary significantly in price, so choose wisely if you're trying to save money. Fast food and street stalls are typically your cheapest options, which sit down restaurants can be significantly more expensive.

Prices for flights to both Tsavo National Park and Serengeti National Park change regularly based on dates and travel demand. We suggest you find the best prices for your next trip on Kayak, because you can compare the cost of flights across multiple airlines for your prefered dates.

Serengeti National Park's costs for entertainment, tickets, attractions, and tours will often cost around $46 per person, per day. This cost can vary widely by the type of activity, however, as this includes admission tickets, day tours, museums, and other things to do.

Tsavo National Park's costs for entertainment, tickets, attractions, and tours will often cost around $44 per person, per day. This cost can vary widely by the type of activity, however, as this includes admission tickets, day tours, museums, and other things to do.

While the amount that someone spends on alcohol while visiting Serengeti National Park may vary from person to person, on average a person spends $13 per day on alcoholic beverages.

While the amount that someone spends on alcohol while visiting Tsavo National Park may vary from person to person, on average a person spends $22 per day on alcoholic beverages.


When comparing the travel costs between Serengeti National Park and Tsavo National Park, we can see that Serengeti National Park is more expensive. However, the two cities are actually relatively comparable in price, as the difference is somewhat minimal. Generally, this means that you could travel with generally the same travel style and level of luxury in each place. Since both cities are in Africa, it's no surprise that their costs are relatively close, as many destinations here have somewhat similar travel prices overall. 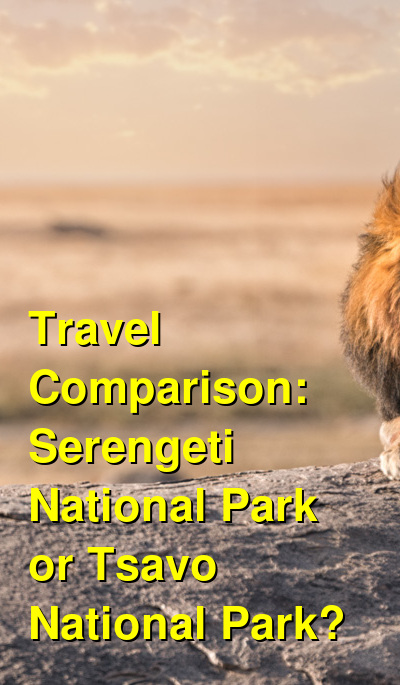