How much does it cost to travel to Santa Elena?

How much money will you need for your trip to Santa Elena? You should plan to spend around ₡37,405 ($61) per day on your vacation in Santa Elena, which is the average daily price based on the expenses of other visitors. Past travelers have spent, on average, ₡9,602 ($16) on meals for one day and ₡4,516 ($7.41) on local transportation. Also, the average hotel price in Santa Elena for a couple is ₡44,467 ($73). So, a trip to Santa Elena for two people for one week costs on average ₡523,676 ($859). All of these average travel prices have been collected from other travelers to help you plan your own travel budget.

A vacation to Santa Elena for one week usually costs around ₡261,838 for one person. So, a trip to Santa Elena for two people costs around ₡523,676 for one week. A trip for two weeks for two people costs ₡1,047,352 in Santa Elena. If you're traveling as a family of three or four people, the price person often goes down because kid's tickets are cheaper and hotel rooms can be shared. If you travel slower over a longer period of time then your daily budget will also go down. Two people traveling together for one month in Santa Elena can often have a lower daily budget per person than one person traveling alone for one week.

How much does a trip to Santa Elena cost? Is Santa Elena expensive? The average Santa Elena trip cost is broken down by category here. All of these Santa Elena prices are calculated from the budgets of real travelers.

Looking for a hotel in Santa Elena? Prices vary by location, date, season, and the level of luxury. See below for options.

How much does it cost to go to Santa Elena? Naturally, it depends on the dates. We recommend Kayak because they can find the best deals across all airlines.

The price of renting a car in Santa Elena will depends on dates, the type of car, the location, and your age. We recommend Kayak because they can find the best deals across all car rental companies.

Santa Elena On a Budget 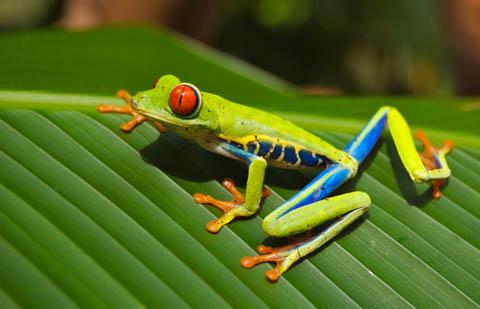 Tree Frog, Costa Rica
Santa Elena is a cute town, and the closest to the Monteverde Cloud Forest. It's one of the most popular destinations in Costa Rica, and is a great place to experience the cloud forest and see some of country's unique wildlife.

In the Monteverde Cloud Forest you have a good chance of seeing rare quetzals which are the national bird of Costa Rica. Other common animals include white-faced capuchin monkeys, howler monkeys, orange-kneed tarantulas, any of 8-9 species of hummingbirds, and sloth.

Santa Elena is about 1,400 meters above sea level and has a humid and damp environment. The average yearly temperature is 64 degrees Fahrenheit and the average rainfall is 3,000 millimetres. Humidity can be anywhere between 74% and 97%.

Allow yourself at least a couple of days in the Monteverde area. You'll want time to explore and hike around the cloud forest, and if you're interested in doing a canopy or zip line tour, you'll need time to book that as well. These are generally regarded as some of the best things to do in the Guanacaste area. There are a few sights in the area including the Orchid Garden, the Butterfly and Insect Garden, and Ranario (which is a frog pond).

There are many natural areas, including the Monteverde Cloud Forest, that you can explore near Santa Elena. Monteverde Cloud Forest Reserve is where you'll find the majority of the cloud forest. There is also Bosque Eterno de los Ninos conservation area, which is to the west. To the north is the Reserva Santa Elena, which is less popular than the Monteverde Reserve but has a rustic station and good views of Arenal Volcano.

Santa Elena is a very small town. The main area is at the intersection of three roads that form a triangular block. The block is the town center and where you'll find some of the restaurants and entertainment in the town.

Both Monteverde Cloud Forest and Santa Elena Cloud forest are located outside of town and require transportation or an organized tour to reach.

Santa Elena and the surrounding area has no shortage of activities. The area is well known for its zip line tours, with the most famous being the Cloud Forest Canopy. Other activities in the area include horseback riding and special exhibits about the area's flora and fauna. Activities in Santa Elena are all centered around the area's natural beauty. The area has a strong focus on sustainability and eco-tourism.

Tours to Monteverde cloud forest are easy to organize. Most people recommend a guided tour, as the guides are usually quite good and do know their information. As always, it is best to ask for recommendations. Santa Elena cloud forest is cheaper and smaller, but still worth a visit.

Although Santa Elena is small, there are a few decent restaurants in town. There are also a handful of entertainment options in Santa Elena including a discotheque in the middle of town.

For pizza, Kako's pizza is a good option. They have pizza, Italian food, and casados. The restaurant is found behind the bank and up a driveway. Service can be very slow, but friendly. M&F burgers has the usual Costa Rican food, and a special burger that's served on a tortilla with a few unique toppings such as ham. Chimera has latin based dishes for a good price. They are located across from the El Establo Hotel.

Many people make Monteverde their first stop after arriving in Costa Rica. You can catch a bus that runs from San Jose to Santa Elena in about five or six hours for a few dollars. Alternatively, you can find faster options that will cost you closer to $30. If you choose to drive yourself, then a 4x4 is recommended.

Once you've visited Monteverde and Santa Elena, you can then head on to Arenal with the "jeep boat jeep" option. This is one of the the cheapest and easiest options to connect the two areas.

The town of Santa Elena is quite small, but it is a pleasant place to walk around. It's easy to reach any destination in town on foot, but you will need to catch a bus or taxi to head into Monteverde. There is usually a line of buses and taxis along the main street that will take you to the Monteverde Cloud Forest Preserve.

By backpackguru
Santa Elena has many nearby zip line tours that offer a great thrill. Costa Rica is known for their zip line tours and the ones near Santa Elena are particularly good. It's a great adrenaline rush and you get to come face to face with nature. You get to ride through the cloud forest with great views to spot monkeys and wildlife. Definitely don't leave the Monteverde area without doing the zip line tour, even if you have a fear of heights.