How much does it cost to travel to Nafplio?

How much money will you need for your trip to Nafplio? You should plan to spend around €89 ($106) per day on your vacation in Nafplio, which is the average daily price based on the expenses of other visitors. Past travelers have spent, on average, €27 ($32) on meals for one day and €37 ($43) on local transportation. Also, the average hotel price in Nafplio for a couple is €80 ($94). So, a trip to Nafplio for two people for one week costs on average €1,251 ($1,485). All of these average travel prices have been collected from other travelers to help you plan your own travel budget.

A vacation to Nafplio for one week usually costs around €626 for one person. So, a trip to Nafplio for two people costs around €1,251 for one week. A trip for two weeks for two people costs €2,502 in Nafplio. If you're traveling as a family of three or four people, the price person often goes down because kid's tickets are cheaper and hotel rooms can be shared. If you travel slower over a longer period of time then your daily budget will also go down. Two people traveling together for one month in Nafplio can often have a lower daily budget per person than one person traveling alone for one week.


How expensive is Nafplio? How much money do I need for Nafplio?

How much does a trip to Nafplio cost? Is Nafplio expensive? The average Nafplio trip cost is broken down by category here. All of these Nafplio prices are calculated from the budgets of real travelers.

How much do vacation rentals cost in Nafplio? Prices vary by location, date, size of the place, and the level of luxury. See below for options.

How much does it cost to go to Nafplio? Naturally, it depends on the dates. We recommend Kayak because they can find the best deals across all airlines.

The price of renting a car in Nafplio will depends on dates, the type of car, the location, and your age. We recommend Kayak because they can find the best deals across all car rental companies.

Nafplio On a Budget 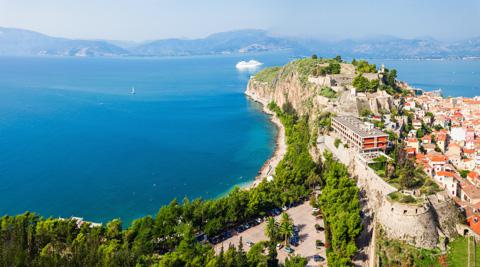 Nafplio, Greece
The destination of Nafplio exists as a historic seaport town on the Peloponnese peninsula. From prevailing as a major port under royal succession in the Middle Ages to standing under the Republic of Venice, Ottoman Empire, and finally becoming capital of the First Hellenic Republic and then the Kingdom of Greece, this place has seen it all. Nafplio is now the capital of the region of Argolis.

Like most port cities, Nafplio is a center of activity. The little peninsula of the Old Port has much to offer in hotels, dining, shopping, museums, and sight-seeing. The alleyways lined with shops and restaurants are laid out much like those of Athens, however, the fresh sea air and polished stone streets give Nafplio a feel of its own apart from the rest.

In addition to embodying the quaint aura of a seaport town, Nafplio is home to two historic fortresses dating back to as early as the 15th Century.

The castle of Bourtzi is located in the center of the harbor and is one of the best things to do in Nafplio. This fortification was originally built by the Venetians to protect the city from pirates and invaders. Since then, Bourtzi has existed as a fortress, residence of the executioners of convicts from the castle of Palamidi, a hotel, and is currently a tourist attraction which can be reached by boat.

Palamidi is another fortress built by the Venetians on top of a cliff overlooking the city. With impressive views above the Argolic Gulf, the city of Nafplio, and the surrounding country, this castle proved to be a vital stronghold for the city. There are said to be 913 steps winding from the town to the fortress, however, if you wish to reach the top you must climb over a thousand. Of course there is a way to drive up to the fort, but taking the hike really allows you to appreciate the greatness of the defense, allows you to imagine what it was like for invaders to attack the fortress after lugging weapons and armor up the very same cliffs. Whichever way you reach the top, exploring Palamidi itself could take the whole day, with tunnels, dungeons, pathways, and stairwells lining the entire hill in a labyrinth of stonework.

As mentioned before, the Old Port is the hub of Nafplio. It is very much like the Plaka of Athens, but cleaner and more beautiful. Syntagma Square sits at the center of it all, charmingly paved in marble and surrounded by historic buildings, including a Turkish mosque, some popular shops and cafes, the Archaeological Museum, and the Xenon Inn Hotel. Branching out from this center are more marble alleys lined with bustling shops, bakeries, bars, and restaurants. Nearly each of these streets eventually leads down to the surrounding sea, with a few leading uphill to the fortress of Palamidi for even better views.

While the two fortresses mentioned earlier are enough to occupy an entire day, there are a few other attractions in Nafplio that are worth the while as well. The Archaeological Museum of Nafplio is housed in a stone building that is acknowledged as one of the best preserved Venetian structures in all of Greece. The permanent collection is historically divided amongst the building's two floors with artifacts dating from the remotest prehistorical exhibit to periods of antiquity representing civilizations of Tirynth, Assini, Berbati, Ancient Epidaurus, and others. With stone, metal and clay vessels, ivory figurines, signets, jewels made of gold, semi-precious gems, amber, faience, and glass objects, the Archaeological Museum is well-stocked and laid out to take you through a walk of Greek history.

Another popular attraction of Nafplio is to simply walk the path lining the outer edge of the peninsula. During the day, many frequent this area to climb down to the rocks for a dip in the sea. You might wish you swim the day away and then find a spot on the path to watch the sun set on glimmering waters.

Like in Athens, Nafplio's Old Port is lined with traditional Greek tavernas, cafes, and bakeries. However, being a seaport town, you cannot pass on trying some of the area's freshest seafood. Some top-rated restaurants include Aiolos Tavern, Scuolo Pizza Bar, and Popeye Bistro. Each place is always bustling with the dinner crowd, full of lively conversation and usually serenaded by street musicians playing traditional Greek music. For dessert, a must stop is the Antica Gelateria di Roma, to try some of the tastiest, authentic Italian gelato that you will find in Greece.

Nafplio is an easy two hour drive from Athens if you choose taxi or car rental options. There are also hourly buses from Athens Kiffisou street bus station. You can get information on price and times from the Greek National Tourist Organization on Dionysiou Areopagitou Street in Athens right down the street from the Acropolis Museum or by contacting K.T.E.L. bus services. There are also several cruises that stop in Nafplio if you prefer boat or ferry.