How much does it cost to travel to Johor Bahru?

How much money will you need for your trip to Johor Bahru? You should plan to spend around RM198 ($47) per day on your vacation in Johor Bahru, which is the average daily price based on the expenses of other visitors. Past travelers have spent, on average, RM32 ($7.54) on meals for one day and RM43 ($10) on local transportation. Also, the average hotel price in Johor Bahru for a couple is RM275 ($65). So, a trip to Johor Bahru for two people for one week costs on average RM2,772 ($653). All of these average travel prices have been collected from other travelers to help you plan your own travel budget.

A vacation to Johor Bahru for one week usually costs around RM1,386 for one person. So, a trip to Johor Bahru for two people costs around RM2,772 for one week. A trip for two weeks for two people costs RM5,544 in Johor Bahru. If you're traveling as a family of three or four people, the price person often goes down because kid's tickets are cheaper and hotel rooms can be shared. If you travel slower over a longer period of time then your daily budget will also go down. Two people traveling together for one month in Johor Bahru can often have a lower daily budget per person than one person traveling alone for one week.

How much does a trip to Johor Bahru cost? Is Johor Bahru expensive? The average Johor Bahru trip cost is broken down by category here. All of these Johor Bahru prices are calculated from the budgets of real travelers.

Looking for a hotel in Johor Bahru? Prices vary by location, date, season, and the level of luxury. See below for options.

How much does it cost to go to Johor Bahru? Naturally, it depends on the dates. We recommend Kayak because they can find the best deals across all airlines.

The price of renting a car in Johor Bahru will depends on dates, the type of car, the location, and your age. We recommend Kayak because they can find the best deals across all car rental companies.

Johor Bahru On a Budget 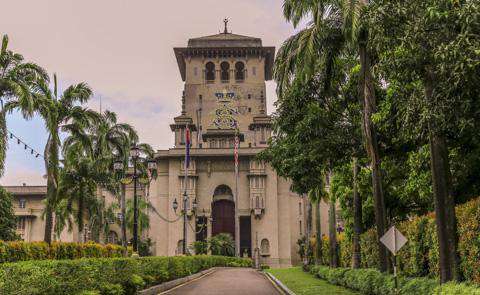 Johor Bahru, Malaysia
Johor Bahru is the capital of the state of Johor in Southern Malaysia. Though it is largely industrial and does not typically cater to tourists, especially compared to the grandeur of neighboring Singapore, the city does have some opportunities for shopping, dining, and entertainment.

While Johor Bahru is primarily an industrial city, the city is home to a few noteworthy landmarks. One such monument is the Sultan Abu Bakar Mosque, built between 1892 and 1900 under the direction of Sultan Abu Bakar. An important symbol for the city, the mosque is also located near the Royal Abu Bakar Museum (The Grand Palace Johor), also called Istana Besar. This Grand Palace is one of the oldest buildings in Johor (1866), and is now filled with information and rare artifacts related to the Royal Family.

Another unique architectural sight is the Arulmigu Sri Rajakaliamman Glass Temple, which was listed in 2010 in the Malaysian Book of Records as the first and only glass temple in the nation. Aside from this Hindu Temple, Johor Bahru is also home to a Chinese Temple that is one of the oldest structures in the city. In addition to architectural landmarks, visitors to Johor Bahru flock to the LEGOland Malaysia theme park where they can enjoy LEGO-themed rides and character meet and greets.

Dataran Bandaraya Johor Bahru or (Johor Bahru City Square) is the main square in Johor Bahru. This area is one of the busiest and most attractive sectors of the city with plenty of interesting sights, shops, and restaurants close to the square. It is marked by a large clock tower. Another hub for activity is Jalan Wong Ah Fook-a major one-way road at the center of the business district with many options for shopping and dining. Additional shopping is available in the malls of the city to the north of the main street, a few of which include KSL City Mall and Holiday Plaza.

Between Johor Bahru City Square and the Jalan Wong Ah Fook main street, there is an area of the city that is home to the Johor Zoo and the Zaharah Botanic Gardens. The zoo is small but features a playground as well as pony and boat rides, and even camel feeding. In addition to the zoo, the gardens offer a nice place to take a break from the bustle of the city. These grounds are actually a part of the palace grounds, with the Great Palace of Johor located on the southern end near the shoreline that divides Malaysia from Singapore. Generally this area is known as Taman Istana and consists of about 53 hectare of beautifully tended green space and gardens.

For those looking to engage in some outdoor activities there are plenty of golf courses, the most premier of which include Royal Johor Country Club and Tanjung Puteri Resort. Other activities in the area include boat diving, snorkeling trips, and various excursions around the island.

Since Singapore is just across the Causeway, it is also common for travelers to take days trips across the way. Some of Singapore's best attractions include the Marina Bay Sands Hotel with its iconic rooftop pool, the Gardens by the Bay, and Universal Studios Singapore, amongst much more.

Malaysian cuisine typically results from a mix of Malay, Chinese, Indian, Indonesian, and ethnic Bornean cooking traditions. Due to its proximity to Singapore, the Johor Bahru area dishes are similar to those across the border. One such common dish is laksa-a spicy noodle soup based in curry coconut milk and made with chicken, shrimp, or fish. Hainanese chicken rice is another popular meal, adapted from a dish brought by Chinese immigrants. Rice is generally the central component to traditional Malay dishes, served with accompaniments or relishes like sambal, a relish-like sauce made from chili peppers. One of Malaysia's most popular foods is satay, which consists of marinated beef and chicken pieces skewered with wooden sticks and cooked on a charcoal grill. Street food culture is very popular in Johor Bahru with plenty of options available along Jalan Wong Ah Fook.

The city is served by Senai International Airport (formerly known as Sultan Ismail International Airport), and is located about 32 kilometers northwest of the Johor Bahru's city center. Domestic and international flights are provided by Malaysia Airlines, Air Asia, Firefly, and Malindo Air. Visitors can reach Johor Bahru from the airport via the Causeway Link, which operates airport express shuttle buses. Many travelers also opt to fly into Singapore Changi Airport, just across the border in Singapore-using the Causeway to cross into Malaysia.