How much does it cost to travel to Lillehammer?

How much money will you need for your trip to Lillehammer? You should plan to spend around kr891 ($84) per day on your vacation in Lillehammer, which is the average daily price based on the expenses of other visitors. Past travelers have spent, on average, kr303 ($28) on meals for one day and kr34 ($3.22) on local transportation. Also, the average hotel price in Lillehammer for a couple is kr1,074 ($101). So, a trip to Lillehammer for two people for one week costs on average kr12,480 ($1,172). All of these average travel prices have been collected from other travelers to help you plan your own travel budget.

A vacation to Lillehammer for one week usually costs around kr6,240 for one person. So, a trip to Lillehammer for two people costs around kr12,480 for one week. A trip for two weeks for two people costs kr24,961 in Lillehammer. If you're traveling as a family of three or four people, the price person often goes down because kid's tickets are cheaper and hotel rooms can be shared. If you travel slower over a longer period of time then your daily budget will also go down. Two people traveling together for one month in Lillehammer can often have a lower daily budget per person than one person traveling alone for one week.

How much does a trip to Lillehammer cost? Is Lillehammer expensive? The average Lillehammer trip cost is broken down by category here. All of these Lillehammer prices are calculated from the budgets of real travelers.

Looking for a hotel in Lillehammer? Prices vary by location, date, season, and the level of luxury. See below for options.

How much does it cost to go to Lillehammer? Naturally, it depends on the dates. We recommend Kayak because they can find the best deals across all airlines.

The price of renting a car in Lillehammer will depends on dates, the type of car, the location, and your age. We recommend Kayak because they can find the best deals across all car rental companies.

Lillehammer On a Budget 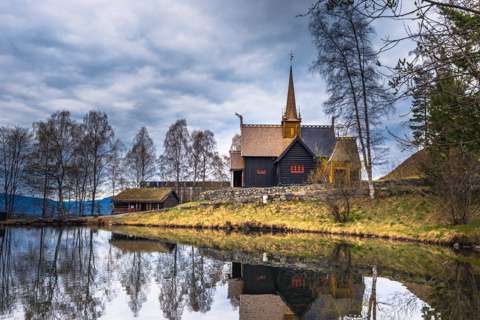 Lillehammer, Norway
Most people know the name Lillehammer because it is the city that hosted the 1994 Olympics. While it's obviously a beautiful travel destination during the winter months when it's covered in snow and winter sport opportunities are abundant, it is also a lovely travel destination in the summer. It's a surprisingly small town with a population of around 25,000. It's streets are lined with quaint, wooden houses that date back to the 19th century. The town is located on the banks of Lake Mjosa. There's a nice shopping street that's called Storgata and cuts through the middle of the old town. It is pedestrian only, giving it a charming atmosphere and making it an enjoyable place to walk around. The town also has nice galleries and museums that are worth a visit.

Lillehammer region has a great ski terrain and plenty of winter sport facilities. Close by you can go to Nordseter and Sjusjoen where you'll find a great network of cross country ski trails that cover more than 350 kilometers. There is a great ski center at Hafjell, about fifteen minutes away, that has a nice mountain village atmosphere and ski in, ski out accommodation.

Lillehammer's climate is relatively dry although there is plenty of snow. Winters are cold and summers are warmer. You can expect the ground to be covered in snow between the months of November and April.

Specific sights in Lillehammer are often geared around the Olympics. Most of these sights are found in the commemorative Olympic Park. There's an Olympic Museum that is interesting to visit as well. You can also visit the ski jumping arena. It has a chairlift to the top and once you reach the top, the view of the city is excellent. You could also climb the 954 stairs to the top if you don't want to take the chairlift. If you've seen enough from the Olympics then there's also the Lillehammer Art Museum, or Maihaugen, which is Northern Europe's largest open air museum. It has 200 buildings that highlight traditional Norwegian styles and includes the Garmo stave church.

Lillehammer itself is quite small. The surrounding region also has a lot to offer travelers. Gudbrandsdalen is the valley that falls between Lillehammer and Dovrefjell. There are several other towns that are located within the valley. Rondane National Park was the country's first national park. It was opened in 1962 and it has mountains, plateaus and valleys, making it very dramatic to visit. Jotunheimen National Park also has many good walking trails. There are great facilities with plenty of tourist cabins and marked trails in some areas, while other areas remain almost completely untouched.

Just outside of town you'll find wonderful places for both downhill and cross country skiing. Lillehammer has been a wonderful winter sports destination for years, well before it hosted the Winter Olympics. During the summer months there are also some great places to go hiking.

If you're interested in shopping then you will enjoy walking around the city's main shopping street, Storgata. This literally translates to mean "Big Street" and it is a pedestrian-only street that has many wooden houses, unique boutiques, and interesting restaurants along it.

Sports clubs around town include the Lillhammer Ice Hockey Club, whose team competes in Norway's major hockey league, the Lillehammer Orienteering Club, the Ski Club, and the Speedskating Club.

There are a small handful of restaurants and hotels or hostels around town. They cater to budget, mid range, or luxury travelers alike. If there is a festival or event in town then it is best to make reservations ahead of time as the limited facilities may fill up.

For a budget food options, check out Oylsund Kafe, which serves kebabs and fish dishes. Mid range options include Kanten Kro and Egon Restaurant. Kanten Kro has a great view that overlooks the city. Egon Restaurant has pizzas and a variety of other reasonably priced dishes. If you're looking for a fine dining experience, head to Paa bordet. This gourmet restaurant has good food and a great wine cellar.

The closest airport to Lillehammer is in Oslo, which is connected to the city by a train that leaves hourly and takes just shy of two hours. Some people choose to drive between Oslo and Lillehammer, but do keep in mind that this is often a longer option because there is frequent construction and road work. Once you arrive in Lillehammer you can walk almost anywhere. There are buses that cover the distance to outside destinations, so it is not necessary that you have access to a car.

By backpackguru in Entertainment
Lysgårdsbakkene Ski Jumping Arena is the ski jumping site for used during the 1994 Winter Olympic games. Today is is now open year around as a tourist attraction. There's a chairlift to the top , or for the energetic you can make the 954 step climb. From the top of the ski jump tower you can get a wonderful view of the city of Lillehammer, along with Lake Mjosa. The cost for the chairlift is 40 kr and includes entrance to the tower. Another fun experience is to try the bobsled simulator for 25 kr. The facilities are open between nine in the morning and 8pm in the summer or 5 pm in the spring/fall. In the winter the hours are reduced to 11 am to 4 pm.

By backpackguru in Entertainment
Maihaugen is the biggest outdoor museum in all of northern Europe. The area is filled with traditional Norwegian buildings that give it a quaint fill and a sense that you've stepped back in time. It truly is a unique atmosphere. Within the museum you'll find the Garmo stave church which dates back to 1200. There's also a very fascinating and well done part of the museum that has a different house representing life and architecture in Norway from every decade of the 1900s. The museum is open between 10 am and 5 pm every day in the summer and between 11 and 4 every day but Monday in the winter. The cost is 140 kr in peak season and 80 kr the rest of the year.