How much does it cost to travel to Bergen?

How much money will you need for your trip to Bergen? You should plan to spend around kr949 ($112) per day on your vacation in Bergen, which is the average daily price based on the expenses of other visitors. Past travelers have spent, on average, kr268 ($32) on meals for one day and kr84 ($9.99) on local transportation. Also, the average hotel price in Bergen for a couple is kr1,179 ($140). So, a trip to Bergen for two people for one week costs on average kr13,286 ($1,572). All of these average travel prices have been collected from other travelers to help you plan your own travel budget.

A vacation to Bergen for one week usually costs around kr6,643 for one person. So, a trip to Bergen for two people costs around kr13,286 for one week. A trip for two weeks for two people costs kr26,573 in Bergen. If you're traveling as a family of three or four people, the price person often goes down because kid's tickets are cheaper and hotel rooms can be shared. If you travel slower over a longer period of time then your daily budget will also go down. Two people traveling together for one month in Bergen can often have a lower daily budget per person than one person traveling alone for one week.


How expensive is Bergen? How much money do I need for Bergen?

How much does a trip to Bergen cost? Is Bergen expensive? The average Bergen trip cost is broken down by category here. All of these Bergen prices are calculated from the budgets of real travelers.

Find a hostel, guesthouse, or B&B in Bergen

How much does it cost to go to Bergen? Naturally, it depends on the dates. We recommend SkyScanner because they can find the best deals across all airlines.

The price of renting a car in Bergen will depends on dates, the type of car, the location, and your age. We recommend SkyScanner because they can find the best deals across all car rental companies.

Bergen On a Budget

Bergen, Norway
Bergen is the second largest city in Norway, and a major tourist destination due to its proximity and easy access to the fjords in West Norway. The nature that surrounds the city is stunning, and you can easily hop into the nearby countryside for some incredible hikes and outdoor adventures. The city itself is well known for its music and art scenes, making it a cultural haven in the country. There are many reasons to visit Bergen, not the least of which is the people that live there. Bergen is the most hilly city within Norway. It is surrounded by the Seven Mountains, which restrict development and keep the city contained. Situated in the far west of Norway, Bergen can be reached by a very scenic seven hour train ride from Oslo.

Bergen is located in the far north very close to the northern sea. It is also surrounded by mountains, so it's climate is unique for the area. There are about 240 days with precipitation every year and the average temperature is about 7 degrees Celsius. Because the weather can be so difficult, it is important to visit during the right time of year. If you happen to be in town during one of the sunny days then you'll find plenty of locals outside enjoying the beautiful outdoors. The city actually has a lot of open spaces, parks, and lawns where locals can soak up the much needed sunlight. July has the warmest temperatures, which averages about 14 degrees Celsius and May receives the least rainfall. Most people prefer to visit Bergen during the month of May because this is when the city hosts many local events and festivals. Alternatively, the summer in general, between the months of June and August, are also a good time to visit.

Bergen has no shortage of sights, but a more enjoyable activity is to simply absorb the atmosphere in the city. Give yourself plenty of time to simply sit in a cafe and sip a coffee, take a stroll through the neighborhoods, or go to a concert, festival, or street fair. These are the things that make Bergen truly enjoyable. If you are looking to visit a few of the sights, some of the more interesting options include the Bergen Art Museum, the city's impressive fish market, St. Jorgen's Hospital, which has an interesting leprosy museum, and Bergen Aquarium. And Bergen is only one of Norway's amazing destinations. If you're planning to travel through the rest of this Nordic nation, check out these great travel tips for Norway.

As a cultural center for Norway, there are no shortage of activities you can enjoy. Concerts, theater, art shows, and guided tours are available throughout the city. There is also plenty of amazing hiking just outside of town. One popular area is Mount Floyen which takes about 40 minutes to hike up. There's also a funicular available. If you're interested in spending time on the beach then head to the sandy beaches at Arboretet at Milde (Hjellestad), Kyrkjetangen at Nordasvannet and Helleneset.

There are some wonderful restaurant options in Bergen, but you're best to avoid the very center of the city where prices are too high and the quality isn't as good. Go a few blocks away from the main touristy areas and you'll find some delicious food at much more reasonable prices. You may be hard pressed to find "local" food, as Norwegian food is rarely available in restaurants. If you really want to try some, then some good options are fish soup or cooked cod, both of which are good. Tipping is generally not expected, but if you receive good service and high quality food, a five to ten percent tip is always much appreciated.

If you're staying in the city center then it's easiest to just walk around town. The downtown can be crossed in about twenty minutes in any direction. Public transportation is also available around town in the form of buses, light rail, and one local commuter train that operates between downtown Bergen and the eastern suburb of Arna. Major bus routes run roughly every 20 minutes, less frequently in the suburbs. If you're headed from the city center to the southern neighbourhoods of Fana and Ytrebygda, then you're better off taking the light rail to the regional terminal at Nesttun and taking a bus on from there. The light rail runs from the city center southwards to Lagunen. It passes by the railway station, the bus station, Brann soccer stadium, and student housing. It usally runs every ten minutes and the entire trip takes about half an hour. 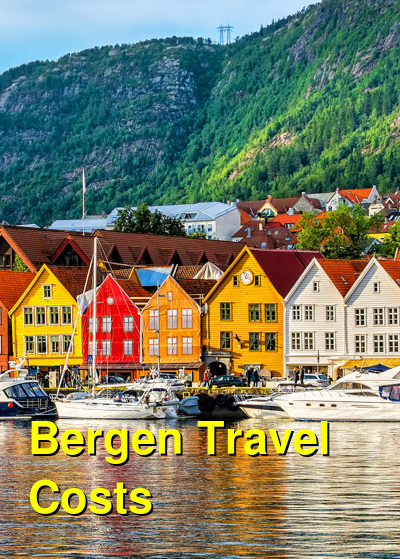 By backpackguru
Because of it's latitude in the far, as well as its close proximity to the sea, the weather in Bergen can be quite uncomfortable. This means choosing a time to visit can be tricking. The city gets 240 days with precipitation every year and has an average annual temperature of 7.6 degrees Celsius. The warmest month of the year is July, and May is the driest. Generally, the most obvious months to visit are the summer months, but even then, you run the chance of rain or cold weather. If you stumble into town when the weather is nice, you'll get to see the city at its finest. All of the locals know to take advantage of the day, and everybody will be outside enjoying themselves. The city schedules plenty of events during the summer months, hoping to take advantage of the weather, making this time a particular nice time to visit.