How much does it cost to travel to Mamaia?

How much money will you need for your trip to Mamaia? You should plan to spend around lei239 ($51) per day on your vacation in Mamaia, which is the average daily price based on the expenses of other visitors. Past travelers have spent, on average, lei84 ($18) on meals for one day and lei99 ($21) on local transportation. Also, the average hotel price in Mamaia for a couple is lei186 ($40). So, a trip to Mamaia for two people for one week costs on average lei3,343 ($713). All of these average travel prices have been collected from other travelers to help you plan your own travel budget.

A vacation to Mamaia for one week usually costs around lei1,672 for one person. So, a trip to Mamaia for two people costs around lei3,343 for one week. A trip for two weeks for two people costs lei6,686 in Mamaia. If you're traveling as a family of three or four people, the price person often goes down because kid's tickets are cheaper and hotel rooms can be shared. If you travel slower over a longer period of time then your daily budget will also go down. Two people traveling together for one month in Mamaia can often have a lower daily budget per person than one person traveling alone for one week.


How expensive is Mamaia? How much money do I need for Mamaia?

How much does a trip to Mamaia cost? Is Mamaia expensive? The average Mamaia trip cost is broken down by category here. All of these Mamaia prices are calculated from the budgets of real travelers.

How much do vacation rentals cost in Mamaia? Prices vary by location, date, size of the place, and the level of luxury. See below for options.

How much does it cost to go to Mamaia? Naturally, it depends on the dates. We recommend Kayak because they can find the best deals across all airlines.

The price of renting a car in Mamaia will depends on dates, the type of car, the location, and your age. We recommend Kayak because they can find the best deals across all car rental companies.

Mamaia On a Budget 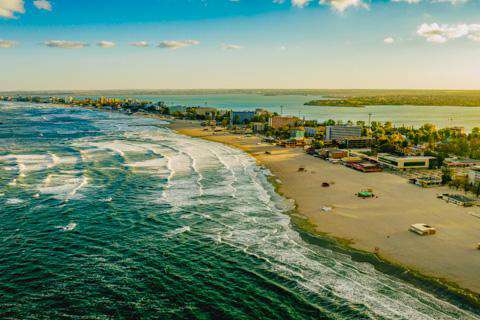 Mamaia, Romania
The most popular beach resort in Romania, Mamaia sits on an 8-kilometer wisp of land between Lake Siutghiol and the Black Sea. With plenty of hotels, restaurants, nightclubs, and an aqua park, the resort area is a party-goer's destination with endless opportunities for fun in the sun and nighttime merriment.

Those visiting Mamaia generally come for two reasons: its white sandy beaches and happening nightlife. The place embodies an atmosphere of play all day and party all night. The beach season is at its best between mid-May and late September, when average daytime temperatures are 25 to 30 degrees Celsius (or 78 to 86 degrees Fahrenheit). The water usually stays warm until late autumn. The nightlife is also at its peak during the summer season due to the flux of holidaymakers.

For those who wish to see some of the sights of the surrounding area, Constanta to the south is home to the National History and Archaeology Museum as well as important landmarks like Ovid's Square, the Genoese Lighthouse, the St. Peter & Paul Orthodox Cathedral, the House with Lions, and the Roman Mosaics.

Other attractions in the region include traditional villages, vineyards, ancient monuments, and the Danube Delta-the best preserved delta in Europe.

Mamaia's isthmus itself is packed with more than 60 hotels and tourist complexes, with some opportunities for camping on its northern end. Additionally, the strip has an infinite amount of restaurants, cafes, bars, and nightclubs to accommodate visitors on holiday. On Mamaia's southern end, is the city of Constanta, another destination for tourists as well as the largest seaport in Romania and on the Black Sea. It is worth exploring for its archaeological treasures and the charming atmosphere of the old town center. With historical monuments, ancient ruins, a casino, museums and shops, and close proximity to beach resorts, Constanta has become another focal point for tourism on the Black Sea coast.

The main activities for those vacationing in Mamaia reside along the waterfront. Its entire shore is lined with white sandy beaches perfect for sunbathing or taking a dip in the Black Sea. Other waterside activities include things like sailing, water skiing, swimming, wind surfing, scuba diving, paragliding, and water biking. There is also a water park called Aqua Magic which features a number of themed pools, water slides like Kamikaze and Turboslide, a water playground, a lazy river, aquatic bar, and a stage for activities, as well as many other water rides for all ages.

In the evenings, the resort`s nightlife offers many options for everyone. There are cafes and restaurants, terraces and taverns, bars and pubs, along with plenty of luxurious clubs that stay open until dawn.

Being a popular holiday resort, Mamaia and the neighboring Constanta will have a range of dining options for all tastes and budgets. Restaurants will serve anything from traditional Romanian cuisine to international flavors, as well as recognizable fast food chains from around the world. As far as Romanian food goes, it takes its influence from a number of the surrounding cultures. Some of these include meatballs from the Turks (used in a soup called perisoare), musaca or moussaka from the Greeks (an eggplant or potato-based dish usually with ground meat), and snitel or wiener schnitzel from the Austrians (a thin veal cutlet that has been breaded and fried). One of the most common meals is a kind of polenta called mamaliga eaten on its own or as a side, while pork serves as the main meat in Romanian cuisine. Other specialties include gulas (goulash), fish or lamb dishes, cheese made from cow's or sheep's milk, and pastries like clatite (crepes), papanasi (Romanian doughnuts), and cozonac (a kind of sweet bread).

One of the most popular ways of transport through the Mamaia area is by cable car where travelers can also enjoy the view. Another means of transportation through Constanta with connections to Mamaia is the RATC (or Regia Autonoma De Transport in Comun Constanta).

There is also the Constanta City Tour-an urban transportation unit that runs from the Train Station of Constanta to Mamaia. It has 7 stops, each one with a touristic attraction. This route travels about 30 kilometers and the complete circuit takes about 2 hours.