How much does it cost to travel to Romania?

How much money will you need for your trip to Romania? You should plan to spend around lei306 ($68) per day on your vacation in Romania, which is the average daily price based on the expenses of other visitors. Past travelers have spent, on average, lei104 ($23) on meals for one day and lei79 ($18) on local transportation. Also, the average hotel price in Romania for a couple is lei227 ($50). So, a trip to Romania for two people for one week costs on average lei4,288 ($951). All of these average travel prices have been collected from other travelers to help you plan your own travel budget.

A vacation to Romania for one week usually costs around lei2,144 for one person. So, a trip to Romania for two people costs around lei4,288 for one week. A trip for two weeks for two people costs lei8,576 in Romania. If you're traveling as a family of three or four people, the price person often goes down because kid's tickets are cheaper and hotel rooms can be shared. If you travel slower over a longer period of time then your daily budget will also go down. Two people traveling together for one month in Romania can often have a lower daily budget per person than one person traveling alone for one week.


How expensive is Romania? How much money do I need for Romania?

How much does a trip to Romania cost? Is Romania expensive? The average Romania trip cost is broken down by category here. All of these Romania prices are calculated from the budgets of real travelers.

Looking for a hotel in Romania? Prices vary by location, date, season, and the level of luxury. See below for options.

How much does it cost to go to Romania? Naturally, it depends on the dates. We recommend Kayak because they can find the best deals across all airlines.

The price of renting a car in Romania will depends on dates, the type of car, the location, and your age. We recommend Kayak because they can find the best deals across all car rental companies.

Romania On a Budget 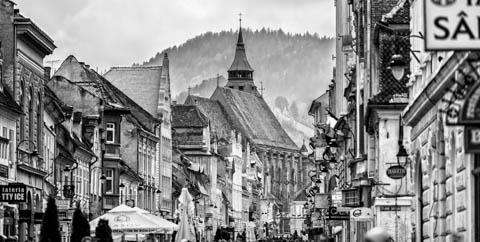 Old Town Brasov
Romania is located in the northern part of the Balkan Peninsula and the western shore of the Black Sea. The country's natural beauty includes scenic mountains and untouched countryside. There is also a rich cultural history and an impressive capital city. The vast size of the country gives visitors plenty of opportunities to explore and still discover some untouched beauty. Cities are quite diverse. Some reflect Romania's recent modernization and introduction into the European Union, while others still hold on to the past.

Romania can be divided into 9 different regions. These include Transylvania, Banat, Oltenia, Southern Bukovina, Maramures, Crisana, Dobrogea, Moldavia and Muntenia. The most famous region, Transylvania is noted for its medieval castles and towns, dark forests and snow covered mountains. The region is developing, however, and the cities are young and vibrant with large shopping centers and impressive economic development. Banat is one of the most economically developed regions in the country and it has beautiful cities and villages. Oltenia is known for its monasteries, caves and health resorts, while Southern Bukovina is where you will find Romania's most famous Painted Monasteries. Wooden churches and old villages dot the landscape in Maramures. Most travelers overland enter through Crisana which shares a border with Hungary. There are beach resorts along the Black Sea in Dobrogea and Moldavia has historic cities and medieval fortresses. The capital city of Bucharest is found in the region of Munteia as are mountain resorts and the Prahova Valley.

Painted Monasteries of Bucovina: This is one of the most scenic and impressive sights in Romania. The exterior walls are exquisitely decorated with 15th and 16th century frescoes. The site is a truly unique destination for anybody interested in religion, history, art or architecture.

Peles Castle: Peles Castle is a Neo-Renaissance castle that is located northwest of the town of Sinaia. It is about 135 kilometers from Bucharest in the Carpathian Mountains. The complex has three monuments including the Peles Castle, the Pelisor Chateau, and Foisor Huntin. It was situated on a medieval route that linked Transylvania and Wallachia.

Bran Castle: This castle is near Bran and Brasov. It's a noted landmark of Romania on the border between Transylvania and Wallachia. This is often referred to as "Dracula's Castle" although there is no real evidence that Stoker knew of the castle. Today it serves as a museum for tourists. There is an art and furniture collection by Queen Marie and an open air museum park that has traditional Romanian peasant structures.

Romanian food is an interesting mix of Oriental, Austrian and French flavors, all with a local twist. Street food is generally available throughout the country as are excellent pastries. It is not hard to find traditional Romanian food, and unless you're in a larger city, international food may be more difficult to come by.

Bulz: This traditional Romanian dish is made with roasted polenta that has been filled with several different kinds of cheeses, bacon and sour cream. It is often served with an egg as well.

Salata Boef:This dish, a beef salad, is usually served during special occasions. It can actually be made with beef, chicken, or even vegetarian. The meat and root vegetables are prepared with mayonnaise and garnished with pickled vegetables. It is often topped with tomatoes and parsley.

Tochitura: This traditional dish is a stew like meal that is made with beef and pork and a tomato sauce. It can be prepared with traditional sausages as well. It is usually served with polenta and fried eggs.