How much does it cost to travel to Sighisoara?

How much money will you need for your trip to Sighisoara? You should plan to spend around lei226 ($44) per day on your vacation in Sighisoara, which is the average daily price based on the expenses of other visitors. Past travelers have spent, on average, lei81 ($16) on meals for one day and lei66 ($13) on local transportation. Also, the average hotel price in Sighisoara for a couple is lei209 ($41). So, a trip to Sighisoara for two people for one week costs on average lei3,159 ($619). All of these average travel prices have been collected from other travelers to help you plan your own travel budget.

A vacation to Sighisoara for one week usually costs around lei1,580 for one person. So, a trip to Sighisoara for two people costs around lei3,159 for one week. A trip for two weeks for two people costs lei6,318 in Sighisoara. If you're traveling as a family of three or four people, the price person often goes down because kid's tickets are cheaper and hotel rooms can be shared. If you travel slower over a longer period of time then your daily budget will also go down. Two people traveling together for one month in Sighisoara can often have a lower daily budget per person than one person traveling alone for one week.


How expensive is Sighisoara? How much money do I need for Sighisoara?

How much does a trip to Sighisoara cost? Is Sighisoara expensive? The average Sighisoara trip cost is broken down by category here. All of these Sighisoara prices are calculated from the budgets of real travelers.

Looking for a hotel in Sighisoara? Prices vary by location, date, season, and the level of luxury. See below for options.

How much does it cost to go to Sighisoara? Naturally, it depends on the dates. We recommend Kayak because they can find the best deals across all airlines.

The price of renting a car in Sighisoara will depends on dates, the type of car, the location, and your age. We recommend Kayak because they can find the best deals across all car rental companies.

Sighisoara On a Budget 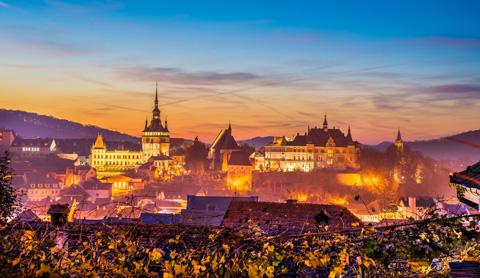 Sighisoara, Romania
Located in the historic region of Transylvania in Romania, Sighisoara takes its roots from German craftsmen and merchants, called the Transylvanian Saxons, who were invited by the King of Hungary during the 12th century to settle and defend the area. Today it is listed as an UNESCO World Heritage Site, and stands as a preserved example of a small fortified city from the medieval era.

The Sighisoara Citadel, a historic fortress from the 12th century, marks the historic center of the city. Still inhabited today, this area also stands as the center of interest for those who are visiting. Within the walls of this old town are remnants of a medieval past, like the Clock Tower, built in 1360, which looms over the city from the top of the hill. Inside the tower there is a history museum, as well as a balcony and spectacular views from the top. Next to the Clock Tower there is the Monastery Church, a Lutheran built in the late Gothic style. The Church on the Hill is another important landmark and beautiful architectural example of the Romanian Gothic. It can be reached via an old covered staircase, made from stone with a wooden roof.

The town is also thought to be the birthplace of Vlad Tepes "The Impaler" (or Dracula), whose father had lived here in exile. The Vlad Dracul House (or "Casa Vlad Dracul") is allegedly the house in which he spent his childhood. It consists of two rooms located on top of a restaurant serving traditional Romanian fare. Right around the corner from his birthplace, there is also a bust of Vlad Tepes to the left of the entrance of the Monastery Church.

Outside of the citadel, there is also an Orthodox Cathedral located across the Tarnava River, as well as Cornesti Church which is the oldest Orthodox church in town, built in 1797.

Sighisoara is considered to be one of the more beautiful and well-preserved inhabited citadels in Europe, renowned for its authentic medieval architecture. In Eastern Europe, this place is one of the few fortified towns that are still inhabited today. The town is made up of two parts-the medieval stronghold which was built on top of a hill and is known as the "citadel" (or cetate), and the lower town which lies in the valley of the Tarnava Mare River. Due to the community of German artisans and craftsmen who dominated the urban economy and built the fortress during its earliest years, the town center today still features traditional buildings and remnants of the place as a center for craft.

Since the town itself is fairly small, most of the main sights can be toured within a day. There is, however, plenty to see and do in the surrounding area as well. Visitors can bike or bike up to the great Oak forest on the Breite plateau, or pack a picnic to enjoy at Vila Franka on the hill just south of the city directly opposite the clock tower. Other nearby attractions include the fortified churches of Biertan or Apold, as well as Saschiz which also has a fortified church and fortress.

As far as events go, the annual Sighisoara Medieval Festival is the most popular, featuring three days of theater, indoor and outdoor music concerts, handicraft demonstrations and exhibitions, painting, sculpture, seminars, film projections, and more. Other festivals include Pro Etnica which showcases interethnic music and art, and the Sighisoara Blues Festival.

As far as Romanian food goes, it takes its influence from a number of the surrounding cultures. Some of these include meatballs from the Turks (used in a soup called perisoare), musaca or moussaka from the Greeks (an eggplant or potato-based dish usually with ground meat), and snitel or wiener schnitzel from the Austrians (a thin veal cutlet that has been breaded and fried). One of the most common meals is a kind of polenta called mamaliga eaten on its own or as a side, while pork serves as the main meat in Romanian cuisine. Other specialties include gulas (goulash), fish or lamb dishes, cheese made from cow's or sheep's milk, and pastries like clatite (crÃªpes), papanasi (Romanian doughnuts), and cozonac (a kind of sweet bread).

The best way to reach Sighisoara is by train. The station provides connections to and from Bucharest, Cluj-Napoca, Arad, Brasov, and Sibiu. There are also direct international links via rail with Vienna and Budapest daily.

Sighisoara is connected to major towns by bus as well. The bus station is adjacent to the railway station, along Strada Libertatii. From here, the city center is within walking distance, just across the river towards the Orthodox cathedral. Once in town, Sighisoara and its sights can be easily navigated on foot.