How much does it cost to travel to Sibiu?

How much money will you need for your trip to Sibiu? You should plan to spend around lei267 ($55) per day on your vacation in Sibiu, which is the average daily price based on the expenses of other visitors. Past travelers have spent, on average, lei87 ($18) on meals for one day and lei102 ($21) on local transportation. Also, the average hotel price in Sibiu for a couple is lei245 ($51). So, a trip to Sibiu for two people for one week costs on average lei3,734 ($772). All of these average travel prices have been collected from other travelers to help you plan your own travel budget.

A vacation to Sibiu for one week usually costs around lei1,867 for one person. So, a trip to Sibiu for two people costs around lei3,734 for one week. A trip for two weeks for two people costs lei7,468 in Sibiu. If you're traveling as a family of three or four people, the price person often goes down because kid's tickets are cheaper and hotel rooms can be shared. If you travel slower over a longer period of time then your daily budget will also go down. Two people traveling together for one month in Sibiu can often have a lower daily budget per person than one person traveling alone for one week.


How expensive is Sibiu? How much money do I need for Sibiu?

How much does a trip to Sibiu cost? Is Sibiu expensive? The average Sibiu trip cost is broken down by category here. All of these Sibiu prices are calculated from the budgets of real travelers.

Looking for a hotel in Sibiu? Prices vary by location, date, season, and the level of luxury. See below for options.

How much does it cost to go to Sibiu? Naturally, it depends on the dates. We recommend Kayak because they can find the best deals across all airlines.

The price of renting a car in Sibiu will depends on dates, the type of car, the location, and your age. We recommend Kayak because they can find the best deals across all car rental companies.

Sibiu On a Budget 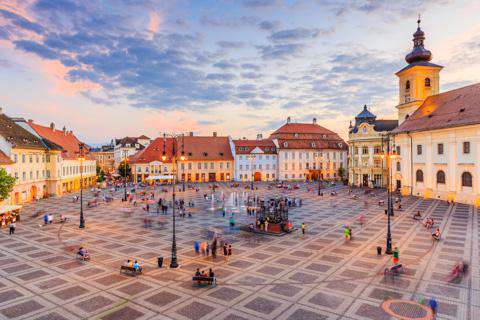 Sibiu, Romania
Located in the Transylvania region of Romania, Sibiu is a historic city with Germanic origins which are evident in its architecture at its old town center. There are many charming squares which showcase landmarks like Gothic churches, a Baroque palace, medieval watchtowers, and more.

Sibiu is perhaps best known for its medieval old town center, which is the setting for most of the main attractions. The oldest remnant from this ancient past is perhaps the Citadel of Sibiu which was one of the best fortified in Europe during the Middle Ages and remains very well preserved today. Some of the citadel's highlights include a stairs passage, which connects the lower part of the citadel with the upper part, as well as the Golden Barrel (Butoiul de Aur), the oldest restaurant in Romania, which sits at the end of the stairs passage. Other architectural landmarks include the 13th-century Council Tower, the Evangelical Lutheran Cathedral, and the Romanian Orthodox Holy Trinity Cathedral.

Also popular are the city's museums which give deeper insight into the art, history, and culture of the surrounding area. One of these is the Brukenthal Museum which resides in the Brukenthal Palace on the Grand Square. It features over a thousand paintings from Dutch and Flemish schools, Italian schools, and, of course, German, Austrian and Romanian collections, as well as Governor Brukenthal's own collection dating from the 15th-18th centuries. The other most-visited museum is the "ASTRA" National Museum Complex, which consists of more than 300 buildings in an area covering one square kilometer of open air. It is located just south of Sibiu and includes highlights like a Universal Ethnography Museum, a Museum of Transylvanian Civilization, and a Museum of Saxon Ethnography and Folk Art.

Sibiu's old town is not only the city's center of activity but also its main attraction. Dating back to a medieval history, most of the buildings which still stand today were raised by German settlers and merchants who came to Sibiu in the late Middle Ages. The area is generally divided into two parts-the Upper Town which contains most of the city's historic sights, and the Lower Town which is home to many charming buildings and cobbled squares. The Small Square (or Piata Mica), situated in the northern part of the Upper Town, is especially popular with plenty of shops, pubs, and restaurants. The other main squares in the city include the Grand Square, the largest, which is home to the Baroque Brukenthal Palace, and Huet Square which hosts a number of Gothic buildings as well as the Evangelical Lutheran Cathedral at its center.

The best way to experience Sibiu is to explore the sights on foot, moving from square to square admiring old-world architecture and learning about the city's art, history, and culture at the local museums.

There is also plenty to do in the area surrounding the city as well with opportunities for outdoor activities like hiking and biking. The Fagaras Mountains and Cindrel Mountains are two locations for an excursion outside of the city. Visitors can additionally take short trips to a bathing resort in Ocna Sibiului or the UNESCO World Heritage Sites at the villages of Biertan and Valea Viilor.

In the old town of Sibiu there are plenty of restaurants, cafes, and fast food available-serving both local and international fare. The Small Square in particular has a large range as well as the best quality food and service in the city. As far as Romanian food goes, it takes its influence from a number of the surrounding cultures. Some of these include meatballs from the Turks (used in a soup called perisoare), musaca or moussaka from the Greeks (an eggplant or potato-based dish usually with ground meat), and snitel or wiener schnitzel from the Austrians (a thin veal cutlet that has been breaded and fried). One of the most common meals is a kind of polenta called mamaliga eaten on its own or as a side, while pork serves as the main meat in Romanian cuisine. Other specialties include gulas (goulash), fish or lamb dishes, cheese made from cow's or sheep's milk, and pastries like clatite (crepes), papanasi (Romanian doughnuts), and cozonac (a kind of sweet bread). One local dish particular to this area is ciorba, a sour soup which has different variants with meatballs and/or vegetables.

There are direct connections to Sibiu International Airport from many European cities, especially those in Germany and Italy. Transylvania's largest airline is Carpatair, which offers daily connections to Munich, Bergamo, and Treviso, and connections three times a week to Bologna, Verona, Rome, and Stuttgart. Other airlines include Tarom, Lufthansa, and Blue Air.