How much does it cost to travel to Salta?

How much money will you need for your trip to Salta? You should plan to spend around AR$6,643 ($40) per day on your vacation in Salta, which is the average daily price based on the expenses of other visitors. Past travelers have spent, on average, AR$2,256 ($14) on meals for one day and AR$2,763 ($17) on local transportation. Also, the average hotel price in Salta for a couple is AR$4,788 ($29). So, a trip to Salta for two people for one week costs on average AR$93,001 ($563). All of these average travel prices have been collected from other travelers to help you plan your own travel budget.

A vacation to Salta for one week usually costs around AR$46,501 for one person. So, a trip to Salta for two people costs around AR$93,001 for one week. A trip for two weeks for two people costs AR$186,002 in Salta. If you're traveling as a family of three or four people, the price person often goes down because kid's tickets are cheaper and hotel rooms can be shared. If you travel slower over a longer period of time then your daily budget will also go down. Two people traveling together for one month in Salta can often have a lower daily budget per person than one person traveling alone for one week.


How expensive is Salta? How much money do I need for Salta?

How much does a trip to Salta cost? Is Salta expensive? The average Salta trip cost is broken down by category here. All of these Salta prices are calculated from the budgets of real travelers.

Looking for a hotel in Salta? Prices vary by location, date, season, and the level of luxury. See below for options.

How much does it cost to go to Salta? Naturally, it depends on the dates. We recommend Kayak because they can find the best deals across all airlines.

The price of renting a car in Salta will depends on dates, the type of car, the location, and your age. We recommend Kayak because they can find the best deals across all car rental companies.

What did other people spend on Transportation in Salta?

Typical prices for Transportation in Salta are listed below. These actual costs are from real travelers and can give you an idea of the prices in Salta, but your costs will vary based on your travel style.

What did other people spend on Food in Salta?

Typical prices for Food in Salta are listed below. These actual costs are from real travelers and can give you an idea of the prices in Salta, but your costs will vary based on your travel style.

What did other people spend on Entertainment in Salta?

Typical prices for Entertainment in Salta are listed below. These actual costs are from real travelers and can give you an idea of the prices in Salta, but your costs will vary based on your travel style.

Tips and Handouts Budget in Salta

What did other people spend on Alcohol in Salta?

Typical prices for Alcohol in Salta are listed below. These actual costs are from real travelers and can give you an idea of the prices in Salta, but your costs will vary based on your travel style.

What did other people spend on Water in Salta?

Typical prices for Water in Salta are listed below. These actual costs are from real travelers and can give you an idea of the prices in Salta, but your costs will vary based on your travel style.

Salta On a Budget 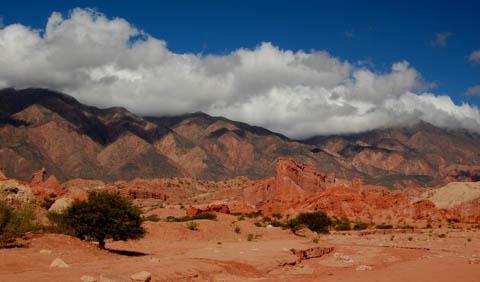 Salta, Argentina
Located in the heart of the famous Northwest region of Argentina, at 1200m of elevation and at the foot of the Cerro San Bernardo, Salta is the largest city of the region and perhaps the most beautiful colonial city of Argentina. Founded in 1582 by the Spanish, Salta was an important stop for merchants who followed the usual trade road through Bolivia and Peru. Argentines call this city nestled in the foothills of the Andes and surrounded by mountains, of just over half a million inhabitants, Salta La Linda (Salta the Beautiful) and it's easy to see why. Young and traditional at the same time, Salta and its renowned museums, plaza side cafes and live musica folklorica of its bustling penas, is a sophisticated and lively city day and night.

Salta's historic center revolves around the Plaza 9 de Julio, the city's main square, where immense palm trees and magnolias have been planted to create what is now thought as the most beautiful square of all Northwestern cities of Argentina. As you walk around the square, and perhaps even stop at one of its little cafes, you will see the city's famous pink and golden cathedral. Do not hesitate to take a peek at the richly decorated interior, which is opened every day from 6h30 to 12h30 and 16h30 to 20h30. Another important sight in Salta, is the Iglesia San Francisco. This red, white and golden church also has a museum opened Tuesday to Friday from 10h30 to 12h30 and 16h30 to 18h30. Near the church is also the Convento San Bernardo, which is one of the oldest building of the city, worth stopping by if you have time. Only the church allows visitors inside, from 6h30 to 8h30 on Monday to Saturday. Many travellers come to Salta to climb up (40 min to 1 hour walk), or simply take the cable car (every day from 10h to 19h, USD$6.50) up to the Cerro San Bernardo, which has been converted into a small natural reserve with a cafeteria. This legendary sight is on a hill of about 250 m that dominates the city and offers a stunning panoramic view on Salta. You can also access the sight by car. At the foot of the Cerro San Bernardo is the Monumento al general Martin Miguel de Guemes, which celebrates this icone of Salta during the Independence Wars. His army of gauchos wore black and red ponchos and also became a symbol of the city.

In terms of activities, Salta is mostly known for its many museums. You will find the Museo Historico del Norte, which explains the cultural and historical evolution of the province.

The Museo de Arqueologia de Alta Montana recounts the story of the expedition led in 1999 that permitted the discovery of three mummified children on the Volcano Llullaillaco at 6 739m of altitude. As its name explains, The Museo de la Ciudad, is a museum about the city of Salta. It was set in the Casa de Hernandez, a fabulous neo-colonial house built in the 1870. The Museo Folklorico Pajarito Velarde is a sort of house-museum, with only one room, owned by an art amateur and sponsor. The fascinating explanations and commentaries made around the pieces of art, music, paintings, literature, singing,... compensate with the place's modesty. The Museo Uriburu, dedicated to the colonial era, bears the name of two Argentine presidents born in Salta, Jose Felix Uriburu and Jose Evaristo Uriburu. The XIX century house and its beautiful corbelled balcony holds a fantastic collection of furniture, paintings, religious and other objects of the colonial era.

The Museo de Bellas Artes is placed in a french-style house of the XIX century and presents the art of Argentinean and European artists by time periods, pre-hispanic, revolutionary, XIX and XX century. Finally the Museo de Arte etnico Americano Pajcha holds six little rooms and a space for exhibitions about the Indian traditions since the pre-columbian era until today. If you are spending a few days around Salta, you can also leave on an excursion on the Tren de Las Nubes (Cloud Train). Be prepared for a 434 km trip (about 15h to 16h hours) from Salta to La Polvorilla viaduct. After crossing 29 bridges, 13 viaducts, 21 tunnels, and numerous quebradas (ravine), you will literally have the heads in the clouds! If you are travelling with children or if you have a more restricted budget, you can also do half of the trip by train and the other half by bus, which is a quicker option, or a major part of the journey can also be discovered by car.

While Salta is fast growing as people from all over Argentina and the world flock to visit for hiking, wine tasting, and exploring the surrounding countryside, Salta takes food and tradition very seriously. With its roots in local Andean culture and a touch of the Spanish colonial influence, the regional palate is slow to accept change. The region's specialty is the Saltena empanada, small and crispy usually filled with beef, but you can also find them filled with cheese, chicken, or ham. Most ingredients that you will find on your plate are grown in the region. The climate of Salta province stretches to extremes, allowing for a wide range of locally grown foods. Mangoes and tropical fruits grow in the north, quinoa and chili peppers are found in the dry desert and vegetables and wine in the more temperate middle of the province. While Salta may not be known for an extensive variety of dishes, what it lacks in diversity, it makes up in the quality of the ingredients.

Many backpackers like to discover the region around Salta with a car. Renting a car is a very good idea not only because it gives you greater autonomy but also simply because the roads in the Northwest region of Argentina are incredibly beautiful and spectacular. Travelers rarely spend more than two days in Salta because most activities and sights are found in between cities and towns and there is no better way to discover the region than by doing a fun road trip through it! To reach Salta, there are many bus companies coming from big cities such as Buenos Aires, Cordoba but also smaller towns including Cafayate, Pumamarca, La Rioja. You can also travel by plane to the airport Martin Miguel de Guemes, which is not too far from Salta's center.