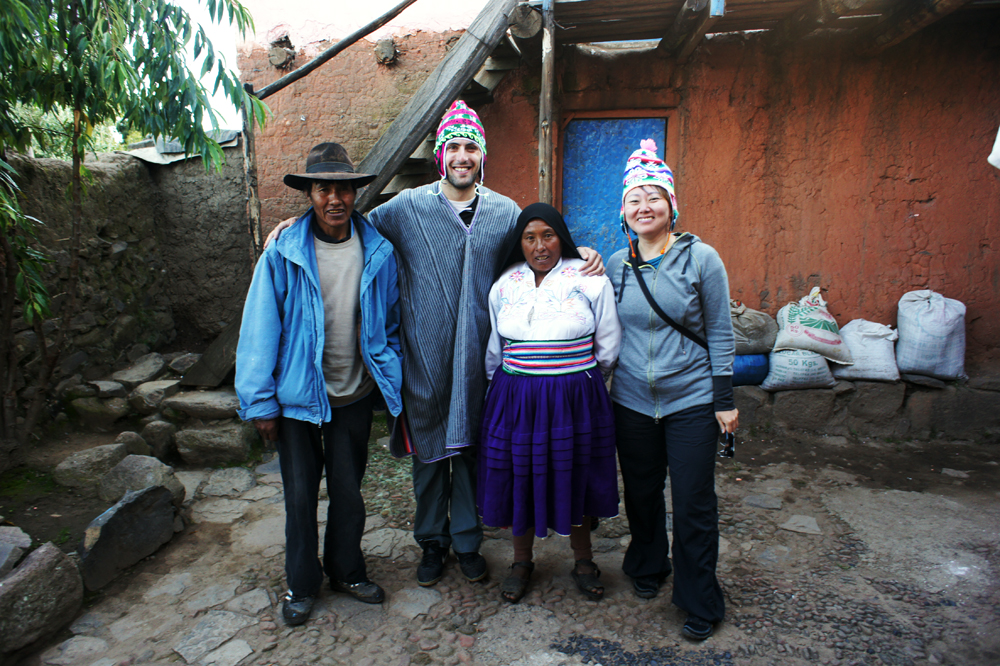 A few months ago, Shelley and Agri gave in to their travel temptations and departed on an around the world adventure. They had been living in Asia already, but wanted to see more of the world. Thus, they took off to South America and haven’t looked back ever since. Long term travel has become a growing trend lately (as you may have noticed from some of the recent interviews here on our blog). Shelley and Agri, like many couples choosing to take off for a long trip, do not fit into the stereotypical “backpacker” mold. They have been married for several years and established their careers, but want to do something exciting before they settle down. Since the beginning of Febuarary they have been roaming around South America, with plans to visit Africa, the Middle East, Europe, and more of Southern Asia before returning home. We asked them all about their trip and future plans, and their answers are below.

Where are you going?

We started our trip near the end of February. Originally, we wanted to fly direct to South America from Seoul (which is where we started our trip), but it turns out that you have to connect through North America somehow. So, rather than waste segments on our RTW tickets, we chose cities in North America where we could visit with friends and family, recover from jetlag and shop for travel gear and supplies. (We also took advantage of free accommodation!!)

Our trip really started, when we got to Colombia on March 5th. We stayed pretty close to Bogota and it’s surrounding area for a few weeks, and then took off for 3 weeks in Peru. We hiked the Inca Trail to Machu Picchu (which has always been a dream) and visited Lake Titicaca, Arequipa, Cusco and Lima. We headed back to the Caribbean coast of Colombia after that for a little R&R on the beach. Right now, we’re in Salvador, Brazil and after a little more time here in Brazil, we’ll be heading to Uruguay, Argentina, Bolivia and Chile if we can squeeze it in somehow. In total, we’re spending about 3 months in South America, but as we’re discovering, you could easily spend much more time here.

When we’re done with South America, we’re heading to South Africa and Tanzania, where we’re doing a safari in the Serengeti, and then chilling out on the beach in Zanzibar. After a month there, it’s off to Turkey, and then Croatia, Montenegro, the Greek Islands, and Albania by land, before we end up in Italy and western Europe for about 3 months.

Find Florence Hostels Near the Duomo

We’ve met other travelers on the road, and now have invites to Switzerland and Germany, so we’re trying to figure our how to work that in. Free accommodation when traveling makes such a huge difference to the budget, and well, we’ve always wanted to have a real Swiss fondue. ;)

See Also  The Places, People, and Stories of Hanne's Travels

After that, we head to the Middle East – Jordan, Egypt and Israel, and then cap off the trip with 6 weeks in India, and some beach time in Indonesia and Thailand.

We’d never been to South America, so it was high on our wish list, as was a safari in Africa. We mostly tried to pick places that neither of us had been to before, but some of the destinations on our itinerary are to visit friends or family, like in Albania, Italy, Jordan and Thailand. We also tried to mix it up with a good variety of cheaper and more expensive countries to try to balance the budget a bit. The other way that we selected destinations is by following the sun! We’re trying to avoid the cold as much as possible, first because we don’t like the cold, but also, because it makes your bags so much lighter, when you don’t have to pack winter clothes and we’re really trying to travel as light as possible.

What motivated you to go on your trip?

Hmm…the motivation for the trip? Well, we’re big time travelers already. It’s a way of life for us, and we get super itchy feet, if we haven’t gone somewhere new for a little while. We think we’ve traveled an average of 2-3 months of every year, for the last 5 years.

This is the first time we’ve done a trip of this length though, and it’s because we plan to have a baby at the end of the year. We know that you can travel with a kid, and believe us, we’re definitely planning on doing it, but the way that you travel definitely has to change when you have a child. So we’re kind of having one last hurrah before we “settle” down.

What did you learn about yourself?

Shelley: One thing that I’ve learned about myself is that I’m quite shy and timid. I feel nervous approaching strangers, so traveling has been a great lesson in opening up. To me, all of life is about the battle of love vs. fear, and travel underscores this in a big way. Do you approach new people and countries with fear and worry, or with trust? It’s challenging because when you’re traveling, everything is new and unfamiliar, so it’s easy to fall into fear, but I’ve found that people all over the world are overwhelmingly good and kind, and that we all ultimately want the same things – security, peace and authentic connection with other human beings. It’s a beautiful thing to realize everyday.

Agri: Personally, I have learned that I feel at home in every corner of the world and that I can find my way around most situations. I have also discovered that all people around the world are truly one, we all have the same needs and wants and that cultures and skin colors just give us different flavors.

What’s the best place you’ve ever been to so far?

Shelley: This is a tough question. Every country has great things and bad things…but I’ve had some truly magical experiences in India. India is definitely a challenging destination, but if you open yourself up to it, crazy stuff can happen. It’s just that kind of place. In Pondicherry, a friend and I knocked on a door, thinking it was a hotel/hostel…turned out it wasn’t. It was someone’s house…but the lady invited us to stay with her, cooked us amazing French/Indian food and took us touring around to all the temples in the area. She also took us on a crazy adventure to meet an old raja who was destitute and selling off the last of his family’s fortunes to make ends meet.

Colombia was also totally amazing, but once again, I think it’s because we met a bunch of locals right off the bat. They took us to an authentic ayahuasca ceremony – not one designed for tourists – and we hung out with them on their farm, eating organic food from their garden and hiking the beautiful mountains around Lake Guatavita.

Later on, we met up with them on the Caribbean coast, and they took us to a coconut plantation on the beach that isn’t in any guidebook. We slept in hammocks, bathed in a lagoon and cooked our meals on a wood fire.

In both cases, integrating with locals made all the difference…and we’ve found this to be the case, in almost every place we’ve been.

Agri: Though quite cliche, Thailand is also very high up on the list. The combination of factors there is so unique that it’s hard to find it anywhere else. It has stunning beaches, jungles, beautiful architecture, it’s a deeply spiritual country, the people are amazing, the food is great, and it’s dirt cheap. We love it so much we decided to get married there and we keep going back time after time.

How did you determine your budget for your trip?

We don’t actually have a budget that’s set in stone, but we’re attempting to average $100/day for both of us, not including flights and big ticket items like our safari in the Serengeti (which is mad expensive), and our hike to Machu Picchu.

We’re fortunate, in that we didn’t have to do too much saving for the trip. We got married last summer and coming from Asian and Eastern European backgrounds, well, we got a lot of cash as gifts. On top of that, we’ve made some investments over the last few years, that have allowed us to take this trip.

HOWEVER, the investments have not paid us so well, that we don’t have to watch our dollars! We make decisions everyday that allow us to save money. We don’t shop. Period. Before the shopping we had to do for this trip, we can’t really remember the last time we spent money on clothes etc…

The best way to save money is to prioritize. Do you need a latte from Starbucks and another pair of jeans, or can you make a coffee at home and wear your jeans from last year? In our minds, the question is, should we spend money on “things,” or should we travel? For us, it’s an easy choice to make. :)

Any advice for other travelers?

Shelley: Definitely interact with the locals in a country. They will show you things that aren’t in any guidebook and make your experience of a place more real and authentic. Also, don’t plan too much. We’ve already had moments on this trip where we regretted having plane tickets booked etc…

We think it’s best to have the frame of the trip laid out but not the details, hoping and allowing for the magic to happen.

Agri: Pack light! My backpack for the trip only weighs 14 kilos and I still don’t even use half the stuff in it. If you need something you can buy it along the way. Shelley’s backpack is carry on size and she’s having no trouble at all.

Shelley and Agri have a travel blog at Travel-Stained.com where you can follow their footsteps around the world. Have a great trip, guys!