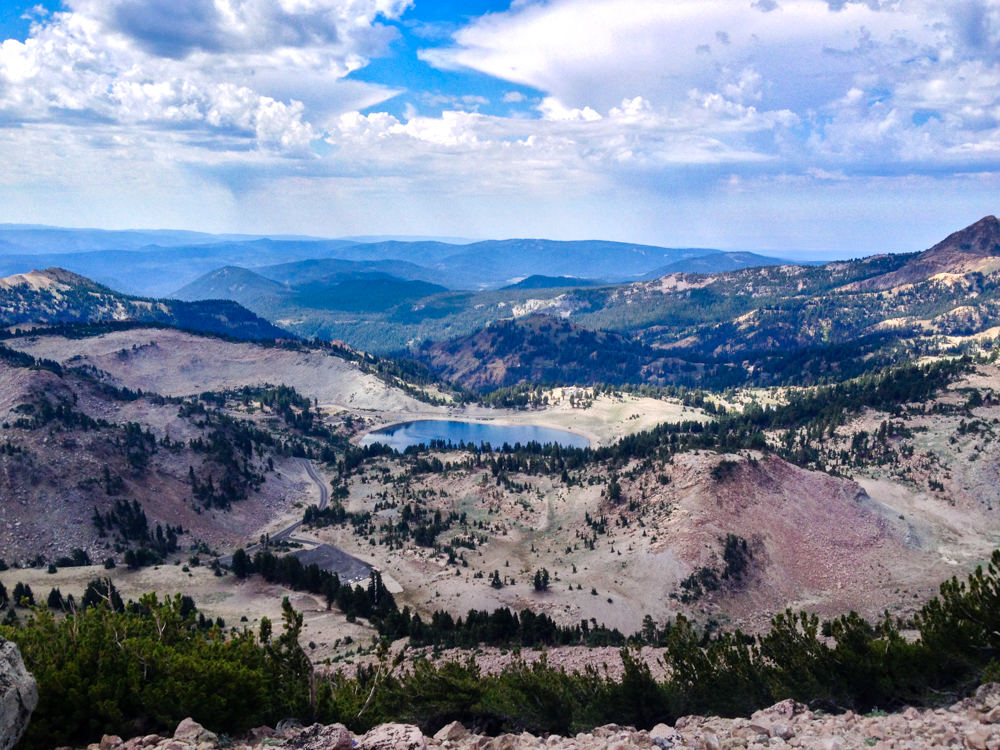 We only spent a few hours on Lake Tahoe. Just enough to relax in the sunshine, and let the chill of Yellowstone melt away. I also found a pinecone about the size of my face, which found its new home on the dashboard of the car. It sat there grandly as we drove to our next big destination, Lassen Volcanic National Park.

Upon our arrival, it was getting late. The park offices were closed, so we drove our way through the park along roads strangely vacant of tourists. It was a little unnerving, as if the place had been evacuated, sun sinking ominously behind clouds dark like smoke. But when we rounded Lassen Peak from below, we came across a campground on its other side where visitors had come to retire for the evening. After the exhausting journey from Yellowstone to Lake Tahoe, we were anxious to set up camp and get some sleep. Heck, we were going to hike a volcano the next day. But through the thick trees we could see a deep pink permeating the sky, a hue glowing like lava in the sky, and reflecting perfectly in the lake on whose shores we now stood. Against the vibrant blush of rosy sky, all else became a silhouette. It was as if the insides of the volcano had burst into the sky and flooded the world above us. As darkness finally fell, it was time to turn in. California was having a drought so we grudgingly coughed up 2 dollars for three minutes of quick scrubbing to shower, and blissfully went to sleep.

When morning came, we drove back to the base of Lassen Peak and embarked on our journey to the top. After the many hours of driving with very little sleep I looked at the first slope with reluctance, but this was my chance to climb a volcano. The last time it had erupted in 1915 was nearly one hundred years ago, but the depths of this peak were still active. As we climbed, the breathing became difficult, rising higher and higher to new elevations. I shuddered to think what it would be like to feel the earth rumble beneath my feet. On a trail so close to the edge, just tracing the slope of Lassen in a zigzag of switchbacks, it would be so easy to slip right down its side. In a moment, all could be lost to a cloud of loose stone and dust.

In the matter of an hour or two, we had reached the top. Though it was August, Lassen’s peak had just a touch of snow and ice remaining—its white crown prominent over the kingdom of earth below. I turned to look at the world beneath me. Stretching across the horizon I could see other peaks in the Cascade Range faded blue in the distance and spotted with pine trees. The place directly below us was a valley, mostly a faded yellow brown from the dried grasses of drought except for a perfectly round lake at its center—Lake Helen. It was as if a god had pressed his thumb print into the valley and filled it with an oasis of clear waters, a mirror to the sky.

See Also  Living in Lyon as a Foreigner

After making such a climb it was difficult to leave, but we had so much yet to see in the wilderness of California. The next big stop would be the Coastal Redwoods. As we drove west through Shasta-Trinity National Forest we rejoiced for the warmest evening we had experienced yet. Windows down, following the gorge of the Trinity River as the last rays of light shone through the trees, we blasted the Beach Boys, “Surfin U.S.A.” It was a scene you could have pulled out of a movie, the true essence of good times and road tripping.

The closer we got to the coast, however, the temperature dropped once again. When we reached the first place of civilization, a cold damp fog had rolled in and our dreams of a comfortable night outdoors had been mortally wounded. We couldn’t bear it. We stopped at a Chinese restaurant in the small city of Arcata and while we waited for our food, attempted a search for a decent motel to spend the night. Reviews were not promising—complaints of horrible smells, stale breakfasts, infestations, thin walls, and poor service. As we read a particularly amusing tirade aloud, a local walking by overheard us, laughed, and remarked, “Welcome to Arcata.” This was life on the road, ups and downs and all arounds. We found a decent enough place to sleep (warm and dry were the priorities), and recouped for our big day amongst the Redwoods.