How much does it cost to travel to California?

How much money will you need for your trip to California? You should plan to spend around $200 per day on your vacation in California, which is the average daily price based on the expenses of other visitors. Past travelers have spent, on average, $38 on meals for one day and $34 on local transportation. Also, the average hotel price in California for a couple is $185. So, a trip to California for two people for one week costs on average $2,794. All of these average travel prices have been collected from other travelers to help you plan your own travel budget.

A vacation to California for one week usually costs around $1,397 for one person. So, a trip to California for two people costs around $2,794 for one week. A trip for two weeks for two people costs $5,589 in California. If you're traveling as a family of three or four people, the price person often goes down because kid's tickets are cheaper and hotel rooms can be shared. If you travel slower over a longer period of time then your daily budget will also go down. Two people traveling together for one month in California can often have a lower daily budget per person than one person traveling alone for one week.


How expensive is California? How much money do I need for California?

How much does a trip to California cost? Is California expensive? The average California trip cost is broken down by category here. All of these California prices are calculated from the budgets of real travelers.

Looking for a hotel in California? Prices vary by location, date, season, and the level of luxury. See below for options.

How much does it cost to go to California? Naturally, it depends on the dates. We recommend Kayak because they can find the best deals across all airlines.

The price of renting a car in California will depends on dates, the type of car, the location, and your age. We recommend Kayak because they can find the best deals across all car rental companies.

Tips and Handouts Budget in California

California On a Budget 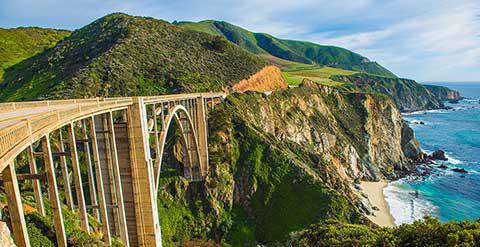 Big Sur, California
California is the most populous state in the U.S. and is known for a variety of attractions such as Hollywood, warm beaches, the San Francisco bay area, Redwood trees, national parks, and stunning mountain vistas. With a variety of locations and activities to offer, California has become one of the premier travel destinations in the world.

The city of San Francisco is unique in the U.S. with its European style streets, cable cars, and eclectic personality. Nearby is the city of San Jose, known as "Silicon Valley", the internet hub of the world. Not too far north is wine country, with Napa Valley and Sonoma at its heart. Just north of San Francisco are the Marin headlands, a natural protected area with rugged mountains, hiking trails, and Muir Woods.

In the far north of the state are several national parks, including Redwood National Park, famous for its massive and extremely tall trees.

Following the coast south from San Francisco will lead visitors to Monterey Bay, known for sea life and its aquarium. Nearby is Carmel, a nifty beach and golf town with a long stretch of attractive coastline. Further south is a stretch of coastline known as Big Sur, which showcases mountainous landscapes with green hills that plunge into the blue sea. Occasional hidden beaches can be found in some of the inlets. In fact, this area should definitely be part of your California Road Trip experience.

Los Angeles is one of the largest cities in the U.S. and has much to offer from Hollywood to the nearby beach areas of Santa Barbara and Long Beach, as well as Orange County, Beverly Hills, Disneyland and Knott's Berry Farm, and the list goes on.

San Diego, in the far south near the Mexican border, offers the warmest weather, scenic beaches, and a historic downtown area (the Gaslamp quarter) and the world class San Diego Zoo.

Popular activities in California include surfing on the many beaches, visiting the numerous national parks, exploring the famous cities, and even skiing in the winter.

Hiking in the summer months is very popular, especially in national parks such as Yosemite, Redwoods, Kings Canyon, and Joshua Tree. The inland desert areas of the southern part of the state are very popular destinations in the winter months.

The Lake Tahoe area is quite popular in the summer and winter. The winter months are terrific for skiing and snowboarding.

California offers a wide variety of cuisine. In the south, much of the food is influenced by Mexico. It's common to find Mexican restaurants, especially those that are low cost and casual. Try a burrito if you're on a budget and you'll have a fresh, delicious meal that will sustain you until your next craving.

With multiple international airports in major cities such as Los Angeles, San Diego, San Francisco, Oakland, San Jose, and Sacramento, to name just a few, connections via plane should not be difficult.

California is also crisscrossed by various interstate highways. While distances can be far, driving times can be acceptable between most major cities depending on traffic. However, expect a very long drive from southern cities such as L.A. to the northern cities of the Bay Area.