How much does it cost to travel to Hue?

A vacation to Hue for one week usually costs around d6,405,445 for one person. So, a trip to Hue for two people costs around d12,810,889 for one week. A trip for two weeks for two people costs d25,621,779 in Hue. If you're traveling as a family of three or four people, the price person often goes down because kid's tickets are cheaper and hotel rooms can be shared. If you travel slower over a longer period of time then your daily budget will also go down. Two people traveling together for one month in Hue can often have a lower daily budget per person than one person traveling alone for one week.


How expensive is Hue?

How much does a trip to Hue cost? Is Hue expensive? The average Hue trip cost is broken down by category here. All of these Hue prices are calculated from the budgets of real travelers.

While meal prices in Hue can vary, the average cost of food in Hue is d196,436 per day. Based on the spending habits of previous travelers, when dining out an average meal in Hue should cost around d78,574 per person. Breakfast prices are usually a little cheaper than lunch or dinner. The price of food in sit-down restaurants in Hue is often higher than fast food prices or street food prices.

The cost of a taxi ride in Hue is significantly more than public transportation. On average, past travelers have spent d102,835 per person, per day, on local transportation in Hue.

How much does it cost to go to Hue? Naturally, it depends on the dates. We recommend SkyScanner because they can find the best deals across all of the airlines.


How much money do I need for Hue?

Typical travel prices in Hue are listed below. These actual costs can give you an idea of the price of travel in Hue. Please keep in mind that the cost of travel in Hue can vary depending on your specific style of travel.

How much do tours to Hue cost? Multi-day tours can often be an effecient way to see the highlights of a country or region.

Find a hostel, guesthouse, or B&B in Hue

Why you need travel insurance and international health insuranceBest Hostels in Hue, Vietnam for Couples, Solo Travellers, and GroupsDa Nang

Hue On a Budget 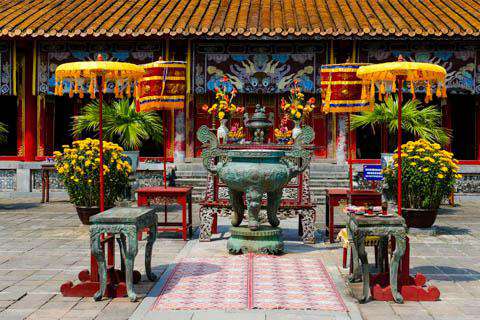 Royal Palace, Hue, Vietnam
Hue is a major city in central Vietnam and was historically the imperial capital. The city was the base for the imperial Nguyen Dynasty, which ruled from 1802 to 1945. During the Vietnam War the city faced many challenges. It was conquered by the Viet Cong and held for 24 days. During this time about 3,000 people were slaughtered for their political views, education level, or religious affiliation.

Today, Hue offers visitors a unique experience with a vibrant atmosphere and rich culture. Many people stop in Hue on their way between Hanoi and Ho Chi Minh City.

As the former imperial capital of Vietnam, there are some great sights around the city. Make sure you visit the Imperial Citadel and the Tombs of the Emperors, both of which are highlights of the area. The Imperial Citadel is the former seat of the government and has a large complex of temples, pavilions, moats, shops, museums, and galleries. The Tombs of the Emperors are located on the Perfume River to the south of the city. They are best visited by river boat cruise.

Hue is divided by the Perfume River or Huong Giang. On the north side of the river you'll find the city's old town and the Citadel. On the south side you'll find most of the city's restaurants and hotels as well as the newer and modern city center. There's a lovely promenade and park area that runs along the riverside, making for a nice place to stroll. Check out some of the unusual sculptures along the way. There are also some interesting tombs that are further outside of town in the outskirts of the city.

There are many different activities that you can enjoy while you're in Hue. Motobike tours of the area are common. There are both day trips and multi-day trips that take you to the nearby town of Hoi An.

Other activities in the area include visiting the Alba Thanh Tan Hot Springs, going to My An Hot Spring and Spa, visiting Thuan An Beach, or enjoying a city sightseeing and food tour.

If you're interested in good Vietnamese food, there are some great local specialties around Hue. The city is famous for its Imperial cuisine, which was typically served for the emperor. An imperial banquet is a unique experience that is worth trying if you have the chance.

There are several traditional local dishes in Hue. Bun bo Hue is a noodle soup with beef slices that is popular and ubiquitous. Nem Lui is made with minced pork that is cooked on bamboo sticks over hot coals. Banh Khoai is a pancake that is stuffed with bean sprouts, shrimp, and pork. Bun Thit Nuong is a barbecued pork that is served with vegetables and noodles. Banh Beo is an appetizer of sticky rice with shrimp and pork. It's usually served with a sweet fish sauce.

Also make sure you pick up a box of the locally made sesame candy which is quite tasty.

Vietnam Bus and Train Prices
The best prices for buses and trains in Vietnam can be found on 12Go. They let you search across all bus, train, and airline routes throughout Asia.


Your options for traveling around Hue are similar to those in other Vietnamese cities. There is no shortage of cyclos, motorbikes, or taxis around town. Generally, the meters are a reliable option in Hue and you can expect the drivers to rely on their meters. Trips usually start somewhere around 15,000 dong for about two kilometers and then climb upwards from there. If you suspect that the meter has been tinkered with, mention calling the police and the driver will back down. A trip to the tombs on the outskirts of town should cost roughly 300,000 dong, including the wait time.

With motorbikes, negotiate a fair price and walk away if they do not agree to a price you consider reasonable. There are no shortage of motorbikes or cyclos so you will find someone else who is more fair in their pricing. You should not have to pay more than 20,000 dong for a trip within Hue.