How much does it cost to travel to Guangxi?

How much money will you need for your trip to Guangxi? You should plan to spend around ¥318 ($45) per day on your vacation in Guangxi, which is the average daily price based on the expenses of other visitors. Past travelers have spent, on average, ¥126 ($18) on meals for one day and ¥165 ($23) on local transportation. Also, the average hotel price in Guangxi for a couple is ¥186 ($26). So, a trip to Guangxi for two people for one week costs on average ¥4,452 ($629). All of these average travel prices have been collected from other travelers to help you plan your own travel budget.

A vacation to Guangxi for one week usually costs around ¥2,226 for one person. So, a trip to Guangxi for two people costs around ¥4,452 for one week. A trip for two weeks for two people costs ¥8,905 in Guangxi. If you're traveling as a family of three or four people, the price person often goes down because kid's tickets are cheaper and hotel rooms can be shared. If you travel slower over a longer period of time then your daily budget will also go down. Two people traveling together for one month in Guangxi can often have a lower daily budget per person than one person traveling alone for one week.


How expensive is Guangxi?

How much does a trip to Guangxi cost? Is Guangxi expensive? The average Guangxi trip cost is broken down by category here. All of these Guangxi prices are calculated from the budgets of real travelers.

While meal prices in Guangxi can vary, the average cost of food in Guangxi is ¥126 per day. Based on the spending habits of previous travelers, when dining out an average meal in Guangxi should cost around ¥50 per person. Breakfast prices are usually a little cheaper than lunch or dinner. The price of food in sit-down restaurants in Guangxi is often higher than fast food prices or street food prices.

The cost of a taxi ride in Guangxi is significantly more than public transportation. On average, past travelers have spent ¥165 per person, per day, on local transportation in Guangxi.

How much does it cost to go to Guangxi? Naturally, it depends on the dates. We recommend SkyScanner because they can find the best deals across all of the airlines.

How much do tours to Guangxi cost? Multi-day tours can often be an effecient way to see the highlights of a country or region.

Find a hostel, guesthouse, or B&B in Guangxi

Guangxi On a Budget

With a landscape cut by the winding Li River around jagged mountain scenery, Guangxi Province is most famous for its natural scenery. A cruise along the river brings visitors past displays of striking karst topography. With stark mountains, traditional villages, bamboo groves, and local farmers at work in the fields, the sights along the river are beautifully picturesque. The mountainous surroundings also make for some of the most mysterious caves, open for visitors to explore a large number of stalactites, stalagmites, and other rock formations. Reed Flute Cave is perhaps the most notable. A natural limestone cave gleaming with multicolored lights, the cave has been a popular attraction for more than a millennium.

Another natural attraction is the Detian Waterfall which crosses the boundary between China and Vietnam and joins with the Ban Gioc Waterfall in Vietnam. Other sights include Beihei Silver Beach in the south, Dragon's Backbone rice terraces in the north, and a number of interesting land formations like Elephant Trunk Hill and Moon Hill.

The two most popular cities in Guangxi Province are Guilin and Yangshuo, both residing along the Li River. Guilin is a popular tourist destination, renowned mostly for its scenery of karst topography with unique mountains jutting out of the urban landscape. Yangshuo is well known for West Street, one of its oldest and most bustling neighborhoods. It is a place where east meets west and cultures collide to create an environment of eclectic activity from souvenir shopping by day to dining by night. The road is completely laid in marble with a simple courtyard-like setting and has opportunities to try flavors from all walks of the world.

Nanning is the Guangxi's capital as well as economic and cultural center of the region. It is a modern city with plenty attractions including the Detian Waterfall, Mt. Qingxiu and Mt. Daming, as well as the quiet Yangmei Ancient Town.

Longsheng in the north is less modern and is home to a few unique ethnic minorities that are prominent in some of the county's villages. The Yao who celebrate the mountain and the Zhuang who venerate water inhabit the regions of the hot springs and rice terraces respectively, while Miao with forest and the Dong with field also occupy quaint villages amongst the vast mountain scenery.

Riverside activities in Guangxi Province can occupy any adventurer with opportunities for boating, hiking, fishing, cave exploring, and more. Hiking trails along the river offer great opportunities to see the gorgeous Li River scenery and the life of riverside farmers. Nature and wildlife tours are also available for those who prefer a more guided activity.

For a taste of local culture, Yangshuo is host to the world's largest natural theater which utilizes the waters of the Li River as its stage. It is called the Sanjie Liu Sing Fair, and puts on spectacular shows against a backdrop of mist, rain, moonlight, twelve hills, and their inverted reflections in the river. The performance includes music and visuals from traditional culture of the region, with myth and legend for inspiration as well.

Guangxi cuisine is known for its small bites and spices, especially chili. The city of Guilin boasts Three Treasures: Guilin chili sauce, Guilin Sanhua Jiu (a liquor distilled from rice), and Guilin pickled tofu. The chili sauce is used widely in local cooking and consists of fresh chili, garlic, and fermented soybeans. Beyond the Three Treasures, Guilin rice noodles have been a local breakfast staple since the Qin Dynasty, traditionally served with horse meat, though you can have without as well. Another popular dish in the region is zongzia dumpling made from glutinous rice and mung bean paste wrapped in a bamboo or banana leaf. These dishes, characterized by a subtle sweetness and delicate use of spices, can be found in just about any city, especially Guilin and Yangshuo. A specialty of Yangshuo is beer fish, caught fresh from the Li River and prepared with a delicate sauce it is said to taste great with beer. Nanning's LaoYouFen is a spicy rice noodle soup with pork, tomatoes, lettuce, pickles, and pepper. Throughout the province each town will have its specialties, though the proximity to the Li River (and the Yulong River, amongst others) makes for an abundance of fresh fish.


Guilin Liangjiang International Airport is one of the more popular airports with about 44 airlines to most large cities in China. From the airport tourists can take the airport bus to the Aviation Building Stop in the urban area, where they can find the Guilin Chief Bus Station and find a bus to most destinations in the province.

By train, the HunanGuangxi Railway and GuiyangGuangzhou High-Speed Railway are the main railways connecting Guangxi with central and southern China. 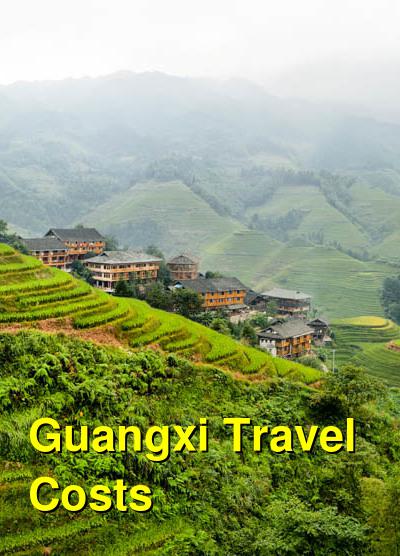