How much does it cost to travel to Guilin?

How much money will you need for your trip to Guilin? You should plan to spend around ¥387 ($57) per day on your vacation in Guilin, which is the average daily price based on the expenses of other visitors. Past travelers have spent, on average, ¥130 ($19) on meals for one day and ¥33 ($4.92) on local transportation. Also, the average hotel price in Guilin for a couple is ¥399 ($59). So, a trip to Guilin for two people for one week costs on average ¥5,414 ($798). All of these average travel prices have been collected from other travelers to help you plan your own travel budget.

A vacation to Guilin for one week usually costs around ¥2,707 for one person. So, a trip to Guilin for two people costs around ¥5,414 for one week. A trip for two weeks for two people costs ¥10,827 in Guilin. If you're traveling as a family of three or four people, the price person often goes down because kid's tickets are cheaper and hotel rooms can be shared. If you travel slower over a longer period of time then your daily budget will also go down. Two people traveling together for one month in Guilin can often have a lower daily budget per person than one person traveling alone for one week.


How expensive is Guilin? How much money do I need for Guilin?

How much does a trip to Guilin cost? Is Guilin expensive? The average Guilin trip cost is broken down by category here. All of these Guilin prices are calculated from the budgets of real travelers.

Looking for a hotel in Guilin? Prices vary by location, date, season, and the level of luxury. See below for options.

How much does it cost to go to Guilin? Naturally, it depends on the dates. We recommend Kayak because they can find the best deals across all airlines.

The price of renting a car in Guilin will depends on dates, the type of car, the location, and your age. We recommend Kayak because they can find the best deals across all car rental companies.

What did other people spend on Transportation in Guilin?

Typical prices for Transportation in Guilin are listed below. These actual costs are from real travelers and can give you an idea of the prices in Guilin, but your costs will vary based on your travel style.

What did other people spend on Food in Guilin?

Typical prices for Food in Guilin are listed below. These actual costs are from real travelers and can give you an idea of the prices in Guilin, but your costs will vary based on your travel style.

What did other people spend on Entertainment in Guilin?

Typical prices for Entertainment in Guilin are listed below. These actual costs are from real travelers and can give you an idea of the prices in Guilin, but your costs will vary based on your travel style.

Guilin On a Budget 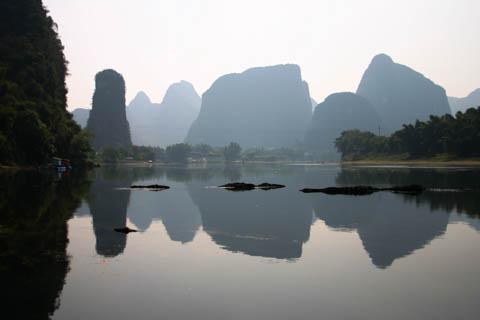 Guilin, China
Guilin is a city in Southern China situated on the west bank of the Li River with Hunan to the north. Its name means, "Forest of Sweet Osmanthus," owing to the large number of fragrant Sweet Osmanthus trees located in the city. Products like tea, sugar, and wine, can be made from the tree and are found in many shops throughout Guilin. A popular tourist destination, the city is renowned for its scenery of karst topography with unique mountains jutting out of the urban landscape.

With a landscape cut by the winding Li River around jagged mountain scenery, Guilin is most famous for its natural scenery. A cruise along the river brings visitors past displays of karst topography worthy of an art gallery. With stark mountains, traditional villages, bamboo groves, and local farmers at work in the fields, the sights along the river are beautifully picturesque. The mountainous surroundings also make for some of the most mysterious caves, open for visitors to explore a large number of stalactites, stalagmites, and other rock formations. Reed Flute Cave is perhaps the most notable. A natural limestone cave gleaming with multicolored lights, the cave has been a popular attraction for more than a millennium.

Yangshuo is a county of Guilin, located about 65 km south of Guilin's center. It is well known for West Street, one of its oldest and most bustling neighborhoods. It is a place where east meets west and cultures collide to create an environment of eclectic activity from souvenir shopping by day to dining by night. The road is completely laid in marble with a simple courtyard-like setting and has opportunities to try flavors from all walks of the world. Attracting more tourists than natives, it is sometimes referred to as the "foreigner's street" or the "global village." A popular local dish of the village is the beer fish. Caught fresh from the Li River and prepared with a delicate sauce it is said to taste great with beer. Some popular cafes include MeiYou Cafe, Anne's Art Cafe, and Paris Cafe. Visually, culturally, and flavorfully, West Street is a neighborhood of the world.

Also nearby is Longsheng, known for similar mountain scenery and its beautiful rice terraces carved into the surrounding hills.

In addition to cruising by boat along the Li River to take in Guilin's renowned scenery, it is also common to enjoy the region along the Li on foot. Hiking trails along the river offer great opportunities to see the gorgeous Li River scenery and the life of riverside farmers. Nature and wildlife tours are also available for those who prefer a more guided activity.

The Lijiang Folk Customs Garden is another popular place to visit in Guilin for an experience of culture, art, folklore, dance, food and beverage, plus beautiful views of the Lijiang River. The park hosts traditional performances of the local culture as well as recreated dwellings from the villages of the indigenous Miao, Yao, Dong and Zhuang peoples. It is a wonderful opportunity to engage in the traditions and culture that have long been established in the region.

The Riyue Shuangta Cultural Park is another hot spot of Guilin. It sits as a large leisure park in the heart of the city, with two symbolic towers (Sun Tower and Moon Tower) standing in the middle of Shan Lake. The towers are beautifully lit at night with panoramic views of the city from the top.

Guilin cuisine is known for its small bites and spices, especially chili. The city boasts Three Treasures: Guilin chili sauce, Guilin Sanhua Jiu (a liquor distilled from rice), and Guilin pickled tofu. The chili sauce is used widely in local cooking and consists of fresh chili, garlic, and fermented soybeans. Beyond the Three Treasures, Guilin rice noodles have been a local breakfast staple since the Qin Dynasty, traditionally served with horse meat, though you can have without as well. Another popular dish in Guilin is zongzi-a dumpling made from glutinous rice and mung bean paste wrapped in a bamboo or banana leaf. Any of these dishes, characterized by a subtle sweetness and delicate use of spices, can be found just about anywhere in the city. Most eateries are located on Binjiang Road, Jiefang West Street, Putuo Road, Meishi Cheng (Cate City, left of the bus station), and Zhishan Road with a popular one located near the bell tower in the Center Square.

By train, Guilin Main Train Station and Guilin North Train Station are on the HunanâGuangxi Railway and GuiyangâGuangzhou High-Speed Railway, which are the main railways connecting Guangxi with central and southern China. High-speed trains are available at North Station between Guilin and Guangzhou, Shenzhen, Changsha, Guiyang, Shanghai, and Beijing.

Public transportation is available by taxi and double-decker bus, as well as on sightseeing boats on the city's canals and lakes.

By backpackguru
Guilin is a fascinating city, with a lake and some great temples to visit. It's worth sending a day or two here, but if you're pressed for time consider heading on to the more scenic town of Yangzhou. It is more beautifully positioned among the steep peaks and the town itself has a better vibe. It's also cheaper to stay in Yangzhou than Guilin because accommodations are more plentiful. You can easily travel between the two by bus. If you flew in to Guilin, hang out a day or two, then head on to Yangzhou.