How much does it cost to travel to Wuyuan?

How much money will you need for your trip to Wuyuan? You should plan to spend around ¥330 ($46) per day on your vacation in Wuyuan, which is the average daily price based on the expenses of other visitors. Past travelers have spent, on average, ¥116 ($16) on meals for one day and ¥74 ($10) on local transportation. Also, the average hotel price in Wuyuan for a couple is ¥296 ($41). So, a trip to Wuyuan for two people for one week costs on average ¥4,621 ($644). All of these average travel prices have been collected from other travelers to help you plan your own travel budget.

A vacation to Wuyuan for one week usually costs around ¥2,311 for one person. So, a trip to Wuyuan for two people costs around ¥4,621 for one week. A trip for two weeks for two people costs ¥9,243 in Wuyuan. If you're traveling as a family of three or four people, the price person often goes down because kid's tickets are cheaper and hotel rooms can be shared. If you travel slower over a longer period of time then your daily budget will also go down. Two people traveling together for one month in Wuyuan can often have a lower daily budget per person than one person traveling alone for one week.


How expensive is Wuyuan? How much money do I need for Wuyuan?

How much does a trip to Wuyuan cost? Is Wuyuan expensive? The average Wuyuan trip cost is broken down by category here. All of these Wuyuan prices are calculated from the budgets of real travelers.

Looking for a hotel in Wuyuan? Prices vary by location, date, season, and the level of luxury. See below for options.

How much does it cost to go to Wuyuan? Naturally, it depends on the dates. We recommend Kayak because they can find the best deals across all airlines.

The price of renting a car in Wuyuan will depends on dates, the type of car, the location, and your age. We recommend Kayak because they can find the best deals across all car rental companies.

What did other people spend on Food in Wuyuan?

Typical prices for Food in Wuyuan are listed below. These actual costs are from real travelers and can give you an idea of the prices in Wuyuan, but your costs will vary based on your travel style.

The Best Hostels in Wuyuan for Backpackers, Couples, and FamiliesNanchangJingdezhenShanghaiChongqingChengdu

Wuyuan On a Budget 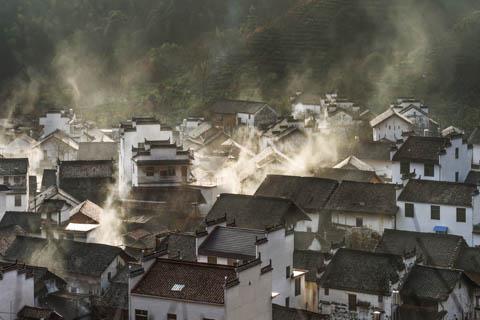 The villages near Wuyuan, China
Wuyuan, China is a small city in the Jiangxi Province in the south central area of the country. The city acts as a transport hub for the province, with many main bus routes running through it. Wuyuan also acts as the main thoroughfare when traveling to local remote villages in the area. It is best to know some Mandarin as this region does not see many non-Mandarin speaking tourists, which also means you should expect some very friendly attention!

Wuyuan's climate is much like the rest of China's: wet, humid, summers, mild spring and autumns, and bitter cold winters. With that, spring and autumn tend to be the best times to visit, with temperatures in the 70's Fahrenheit.

Wuyuan is best known for their stunning, historically rich, villages and temples scattered across the region. The Wuyuan countryside is famed for its beauty and relaxed atmosphere where everyone is happy to say hello and you can even lend a hand in a rice paddy! Keep in mind, most villages require you to pay an entrance fee. There are a few different passes, including a 5-day pass, which allows you entrance into the majority of the villages.

In the village of Small Likeng, you'll find a number of beautiful old Buddhist temples to explore along with traditional homes. The Qinghua village is famous for their ancient Rainbow Bridge, which you can walk over and get sweeping views of the valley. Xiaoqi village boasts a peaceful and relaxing atmosphere in addition to their stunning buildings.

The villages are far better options for food and accommodation, especially thanks to the welcoming atmosphere of the Wuyuan people. The key villages are as follows:

Small Likeng: An old village with small pathways built along the creeks. This is one of the best villages to stay in due to number of sights, including a tea house, Buddhist temples, and traditional homes. They also boast beautiful views of the river running through it.

Xiaoqi: A duet of villages split into upper and lower end, the latter of which is known as the tourist area with a path guiding you through tourist shops. On your way to the upper end, you'll pass rice paddies where you can politely ask to lend a hand, which will often be greatly accepted! The upper end boasts lovely buildings, a tea house, and an overall more relaxed vibe than the lower end.

Sixi Yancun: A more remote village with maze-like streets. This is a very simple village with its main attraction being an ancient bridge.

Qinghua: This beautiful little village is famous for its Rainbow Bridge, and ancient bridge which provides outstanding views overlooking the valley. It is also a pleasant place to walk around the river.

Hiking is a very popular activity in this area due to the incredible natural beauty of the region. At Dazhang Shan Mountain, you'll find the perfect example of such natural beauty with everything from paved walking paths to huge waterfalls. The people in the area actually claim that the waterfall on Dazhang Shan is the highest waterfall in all of China! There are plenty of spots for resting, including a tea shop near the top, along with areas to perform extreme sports.

Enjoy the peaceful atmosphere of Wuyuan from a raft on the river which can be hired. You can also do this along the streams in Small Likeng.

The city center does not have the best restaurants, so going to the villages is your best bet for food. Small Likeng has good food, and possibly one of the only English menus in the area at Brook Hotel. Just keep your eyes peeled for restaurants, or even ask a local and they may invite you back for dinner!

There are no bars or clubs in the area, but you can often find beer or rice wine at restaurants and guest houses.

There are quite a few major bus systems running into Wuyuan, so many that they actually built a new bus terminal. The new bus station is usually where buses from outside city will drop you off while the old bus station is where you can catch buses into the villages.

Taxis tend to be high priced and not worth the cost. Your best bet is to organize a driver through your hotel and pay them for the day, although expect to also pay for their lunch.