Should you visit Figueira da Foz or Coimbra?

Trying to figure out where to travel next? This travel cost comparison between Figueira da Foz and Coimbra can help. For many travelers, the cost of a destination is a primary consideration when choosing where to go.

Coimbra is located in Central Portugal in the Centro Region. It's the third largest city in the country with about 460,000 people living in the entire region. It is also where you'll find the University of Coimbra, which is one of the oldest universities in Europe and the oldest academic institution in the Portuguese speaking world. During the High Middle Ages, Coimbra served as the nation's capital and there are archaeological structures that date back to the Roman era.

Which city is cheaper, Coimbra or Figueira da Foz?

The average daily cost (per person) in Figueira da Foz is €88, while the average daily cost in Coimbra is €82. These costs include accommodation (assuming double occupancy, so the traveler is sharing the room), food, transportation, and entertainment. While every person is different, these costs are an average of past travelers in each city. Below is a breakdown of travel costs for Figueira da Foz and Coimbra in more detail.

An average hotel room with basic furnishings costs about €70 in Coimbra For the most convenient locations and nicer amenities you can expect to pay a bit more.

Food in Coimbra costs travelers about €38 per day on average. Restaurants can vary significantly in price, so choose wisely if you're trying to save money. Fast food and street stalls are typically your cheapest options, which sit down restaurants can be significantly more expensive.

Coimbra's transportation costs can vary by the type of transport chosen by visitors. Naturally, taxis and private drivers cost much more than public transportation options. On average, visitors spend €8.58 per person, per day on transportation in Coimbra.

Hired Cars and Shuttles in Coimbra

Also for Coimbra, here are a few examples of actual transportation services:

Sightseeing, admission tickets, things to do, and other entertainment expenses in Coimbra can vary widely by price. On average, visitors spend around €14 per person, per day on entertainment and sightseeing here.


Tours and Activities in Coimbra

For Coimbra, here are a few prices for actual activities, tours, and tickets provided by various companies:


When comparing the travel costs between Figueira da Foz and Coimbra, we can see that Figueira da Foz is more expensive. However, the two cities are actually relatively comparable in price, as the difference is somewhat minimal. Generally, this means that you could travel with generally the same travel style and level of luxury in each place. Since both cities are in Europe, it's no surprise that their costs are relatively close, as many destinations here have somewhat similar travel prices overall. 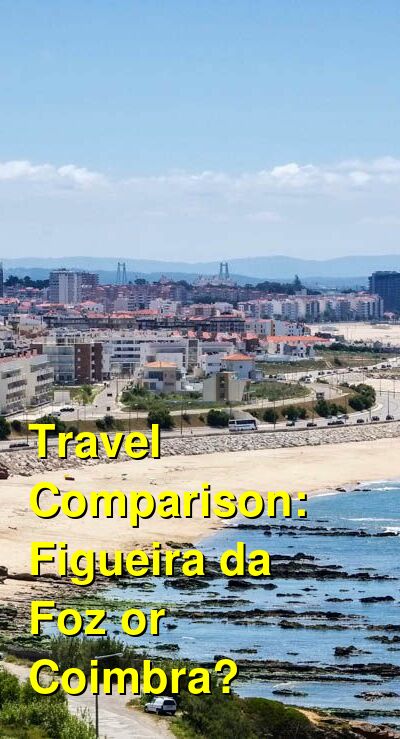