How much does it cost to travel to Portimao?

How much money will you need for your trip to Portimao? Past travelers have spent, on average, €9.19 ($11) on meals for one day. All of these average travel prices have been collected from other travelers to help you plan your own travel budget.

A vacation to Portimao for one week usually costs around €0.00 for one person. So, a trip to Portimao for two people costs around €0.00 for one week. A trip for two weeks for two people costs €0.00 in Portimao. If you're traveling as a family of three or four people, the price person often goes down because kid's tickets are cheaper and hotel rooms can be shared. If you travel slower over a longer period of time then your daily budget will also go down. Two people traveling together for one month in Portimao can often have a lower daily budget per person than one person traveling alone for one week.


How expensive is Portimao? How much money do I need for Portimao?

How much does a trip to Portimao cost? Is Portimao expensive? The average Portimao trip cost is broken down by category here. All of these Portimao prices are calculated from the budgets of real travelers.

Portimao On a Budget

Portimao, Portugal
The second biggest city in the Alrgarve region of Portugal, Portimao sits on the coast where the Arade River meets the Atlantic Ocean. It is renowned for its fresh fish restaurants and is also a popular destination for beachgoers at the Praia da Rocha to the south of the city.

Just a thirty minute walk from the city center or a short bus ride, the Praia da Rocha or "Rocky Beach" offers prime beachfront sights and activities for the general area. It is also one of Alrgarve's most popular resort towns with plenty of entertainment, shopping, and dining backing the beach of golden sands and refreshing ocean waters. For those wanting to escape the crowds of the main beach area, there are also small coves and quieter areas protected by sandstone cliffs further along the shore. In the evenings, this part of town also has a thriving nightlife with a number of lively themed clubs, lounge bars, and late night dance clubs.

The main city of Portimao also has its attractions which include more opportunities for shopping and dining as well as the Museu de Portimao, a regional heritage museum in an old cannery which traces the area's sardine fishing and canning traditions. To the west of the city, visitors can also spend a day exploring the Alvor Boardwalk. The wooden structure winds its course from a harbor, past fishermen's huts, through estuarine wetlands, and shallow blue lagoons. A walk along the Alvor will reveal many different habitats for a number of marine birds and other critters native to the region.

Praia da Rocha not only encompasses the beach but a thriving resort town just inland, between the beach and the greater city of Portimao. This area and downtown Portimao to the north both have plenty of opportunities for shopping, dining, lodging, and entertainment. From Portimao there are also bus services to the more traditional town of Silves, making it an easy day trip to see the ancient capital of the Algarve. Another day trip from Portimao is the historic harbor town of Lagos with its beautiful coastline of weathered cliffs, grottos, and sea caves. The town itself has pretty cobbled streets, a number of historic monuments, and a large marina.

Within Portimao are all of the attractions one could ask from a resort town. Along the beach, activities range from sunbathing and swimming to water sports like jet skiing, banana boating, kayaking, and parasailing. In addition to the waterfront, there are also a number of day trips to take to the surrounding towns which offer an interesting peek into the region's culture and history away from the bustle of beachgoers. Many of these towns can be easily reached by bus, while others can be visited by boat cruises offered along the coast.

The traditional food of Portimao is that typical of the Algarve region, the southernmost area of Portugal. A strip of land which hugs the coast, this region is best known for its seafood dishes. Sardines are particularly famous in Alrgarve, often grilled and served with boiled potatoes and salad. A more traditional way to enjoy the dish is to have the sardine on a slice of local bread which soaks up the oils of the fish. Shellfish are also common and often cooked with whole cloves of garlic, fried in oil and butter. Another method of cooking is the "cataplana" - a clam-shaped pot with a lid, usually made from brass or copper, which is used to slow cook anything from fish or shellfish to meat and served right out of the pot. Local stews are also very popular as is a regional dish called chicken piri piri, where the meat is cooked in a hot and spicy sauce. Most restaurants in Portimao are concentrated on streets along the beachfront south of the city as well as in the downtown area.

The nearest major airport is in Faro, Faro Airport a.k.a. Algarve Airport, located about 70 kilometers from Portimao. It has both domestic and several international routes from across Europe, with most arriving from the UK and Ireland, mainland Europe, and Canada. From Faro, Eva Bus operates buses a number of times daily to Portimao.

The city is also a stop along a rail line which runs between Lagos and Faro. The train ride from Faro to Portimao is about one and a half hours.

Being a sea port, some transportation to Portimao can also be made by boat. 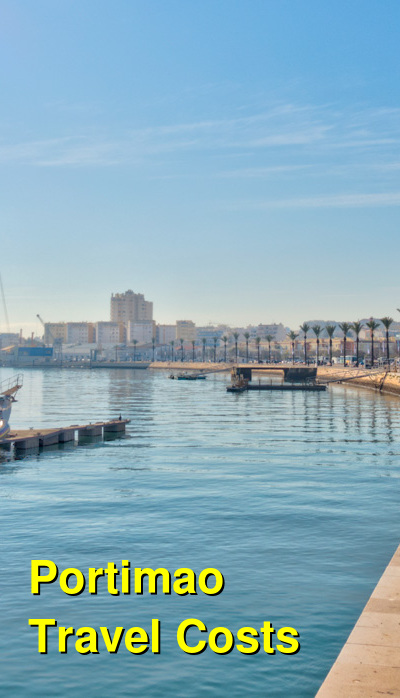