How much does it cost to travel to Evora?

How much money will you need for your trip to Evora? You should plan to spend around €87 ($91) per day on your vacation in Evora, which is the average daily price based on the expenses of other visitors. Past travelers have spent, on average, €35 ($37) on meals for one day and €24 ($25) on local transportation. Also, the average hotel price in Evora for a couple is €72 ($75). So, a trip to Evora for two people for one week costs on average €1,223 ($1,274). All of these average travel prices have been collected from other travelers to help you plan your own travel budget.

A vacation to Evora for one week usually costs around €612 for one person. So, a trip to Evora for two people costs around €1,223 for one week. A trip for two weeks for two people costs €2,446 in Evora. If you're traveling as a family of three or four people, the price person often goes down because kid's tickets are cheaper and hotel rooms can be shared. If you travel slower over a longer period of time then your daily budget will also go down. Two people traveling together for one month in Evora can often have a lower daily budget per person than one person traveling alone for one week.


How expensive is Evora? How much money do I need for Evora?

How much does a trip to Evora cost? Is Evora expensive? The average Evora trip cost is broken down by category here. All of these Evora prices are calculated from the budgets of real travelers.

Looking for a hotel in Evora? Prices vary by location, date, season, and the level of luxury. See below for options.

How much does it cost to go to Evora? Naturally, it depends on the dates. We recommend Kayak because they can find the best deals across all airlines.

The price of renting a car in Evora will depends on dates, the type of car, the location, and your age. We recommend Kayak because they can find the best deals across all car rental companies.

Evora On a Budget 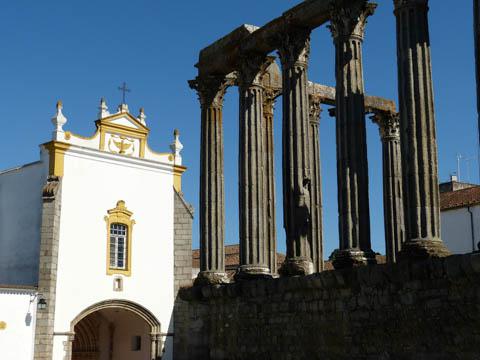 Evora, Portugal
A medieval time capsule, this city is a collection of ancient relics that leaves a lasting air of enchantment upon you. Evora, Portugal is the seat of the Evora District as well as the capital of the Alentejo region. With a population of no more than 60,000, Evora is a small municipality that holds a treasure trove of culture, art, and history. Evora is known internationally for its preservation of medieval architecture, such as parts of medieval walls that still partially surround the city. Moreover, Evora is a member of the Most Ancient European Towns Network and because of its multitude of historic sites, the city was named a UNESCO World Heritage Site. Some of said historic sites include Se Cathedral, Evora Museum, Roman Temple, Palace of the Dukes of Cadaval, the Church of St. John the Evangelist, and the Church of Saint Francis. Besides of its historic beauty, Evora also lives up to the demands of the modern world. According to Expreso, the city was named one of the second most livable cities in Portugal. Evora is also an ambitious and even competitive city, ranked number-one in competitiveness out of the 18 Portuguese capital cities. Whether you look to explore Roman ruins or simply enjoy the current amenities, you will fall under the enchantment that is Evora, Portugal.

Located in the historic center, the Roman Temple, or Temple of Diana, is a world-renowned landmark of ancient society. Included in the classification by the UNESCO as a World Heritage Site, the Roman Temple was dedicated to goddess Diana, the deified embodiment of the moon, the hunt, and chastity. Considered one of the most significant relics of the Roman and Lusitanian civilizations, the Roman Temple was constructed in the first century AD in honor of Augustine, who was hailed a god throughout his leadership. Throughout the second and third centuries, the temple represented a radical renovation of the city during great religious zeal. However, during the fifth century, the Roman Temple was damaged by invading central European tribes. Nevertheless, by the eleventh century, the aligning Evora castle was constructed around the temple. This medieval tower slowly fell into disrepair as the importance of Evora withered. When it was finally identified in 1856, a restoration project was put into place, with the expanse of the project mainly pertaining to the removal of medieval brickwork. Though only a brief visit, the Roman Temple is a breathtaking point of interest that must be explored.

Near the Giraldo Square, one of the best restaurants of Evora stands proudly, attracting inhabitants and tourists alike. A mirror image of a 20th century tavern, Cafe Alentejo fashions a cosmopolitan yet warm air throughout its distinctive structure. Besides it extensive collection of wine, Cafe Alentejo specializes in regional meals, incorporating ingredients throughout Evora. With a friendly staff and fresh ingredients, Cafe Alentejo easily becomes a superb example of quality gastronomy. Some of the dishes includes cheeses and sausages, eggs scrambled with farinheira, pork pie, and a great deal more. Besides its superior service within the walls of the cafe, said service continues its superiority outside its walls, providing local patrons with a takeaway service like no other.

Despite its metropolitan character, Evora provides incredibly cheap bus services. However, these services do not usually continue during the weekends, so other methods of transportation must be used. Be sure you are aware of the times of each route as the bus only operates once or twice a day. The most used route by tourists include numbers 51 and 52 which connects the bus station to the historic district of the city.

If you are looking to make use of private transportation, driving is quite simple in Evora. Though Portuguese drivers tend to drive faster, it should be easy to maneuver yourself around the city. It is to be warned that the motorways are mostly toll roads. Be that as it may, these toll roads do accept credit cards as well as cash. Because it is a city, there are taxicabs readily available. As long as the rate is confirmed prior to the trip, it is a convenient and even preferable method of travel.