How much does it cost to travel to Setubal?

How much money will you need for your trip to Setubal? You should plan to spend around €99 ($103) per day on your vacation in Setubal, which is the average daily price based on the expenses of other visitors. Past travelers have spent, on average, €28 ($29) on meals for one day and €43 ($45) on local transportation. Also, the average hotel price in Setubal for a couple is €94 ($98). So, a trip to Setubal for two people for one week costs on average €1,383 ($1,440). All of these average travel prices have been collected from other travelers to help you plan your own travel budget.

A vacation to Setubal for one week usually costs around €691 for one person. So, a trip to Setubal for two people costs around €1,383 for one week. A trip for two weeks for two people costs €2,766 in Setubal. If you're traveling as a family of three or four people, the price person often goes down because kid's tickets are cheaper and hotel rooms can be shared. If you travel slower over a longer period of time then your daily budget will also go down. Two people traveling together for one month in Setubal can often have a lower daily budget per person than one person traveling alone for one week.


How expensive is Setubal? How much money do I need for Setubal?

How much does a trip to Setubal cost? Is Setubal expensive? The average Setubal trip cost is broken down by category here. All of these Setubal prices are calculated from the budgets of real travelers.

Looking for a hotel in Setubal? Prices vary by location, date, season, and the level of luxury. See below for options.

How much does it cost to go to Setubal? Naturally, it depends on the dates. We recommend Kayak because they can find the best deals across all airlines.

The price of renting a car in Setubal will depends on dates, the type of car, the location, and your age. We recommend Kayak because they can find the best deals across all car rental companies.

The 3 Best Hostels in Setubal, Portugal near Arrabida ParkEvoraFaroPortimaoLagosAlbufeira

Setubal On a Budget 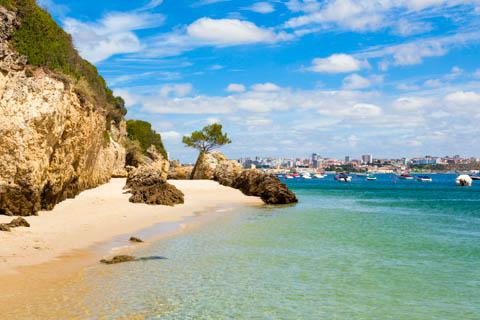 Setubal, Portugal
Setubal is a busy working port and major commercial fishing center. Setubal is a city that has always had a close connection to the seas, and this is celebrated along the newly rejuvenated waterfront, which encompasses the colorful fishing harbor, the popular urban park and the Troia Peninsula ferry terminal. Within the charming historic center is a maze of narrow alleys, hidden plazas, and family-owned shops, along with Portugal's largest fish market. Setubal is primarily an industrial city, but is situated in a region of immense beauty; to the east is the stunning Serra da Arrabida, to the north is historic Palmela, while to the south are the paradise beaches of the Troia Peninsula. Setubal may not be a conventional holiday destination, but there is a surprising amount to see and do within the city and the surrounding region.

The best tourist attraction of Setubal is the Fortaleza de Sao Filipe and the wonderful panoramic views from the imposing battlements and solid walls. The castle dates from 1580. The fort is perched high above the city, and the main draw are the outstanding views over Setubal. Setubal castle has been painstaking restored and today is beautiful national monument this was made possible by the transformation of the complex into an exclusive hotel.

The Mercado do Livramento is one of the best-covered markets in Portugal. The market has a wide range of stalls, selling fresh produce through to local handicrafts but the main specialty is the large fish section. The fish market is a chaotic and lively affair, where stall holders and fishwives call out their stock to savvy early morning shoppers. Visiting the market is a morning activity as by lunch all of the fish is sold and stalls are closing.

The main historical monument of the city of Setubal is the Monastery of Jesus, with a 15th- and 16th-centuries church that represents one of the first buildings in the Portuguese late Gothic style known as Manueline.

Fontainhas (Downtown/Historic Center)
The physical profile of this neighborhood is drawn through narrow and winding streets, on a hillside overlooking the river. Many homes are decorated with architectural details that date back to the 15th and 16th centuries. Every street, building, facade, sidewalk or porch is a piece of memory of the city. Here, the past recedes periods up to Roman and Phoenician, but a walk in downtown is more than a history lesson; is also wander in a vast open shopping area. Bocage Square is the real starting point to exploring the historical center. From there, the 21st century coexists intimately with Roman and medieval legacy. Just five minutes from the Bocage Square is the Jesus Convent , XV century monument whose facade was recently restored. The Church of Jesus, with twisted columns made in brecha Arrabida Stone, native stone from the mountain, is a popular sight in the historical center. Surrounded by esplanades, Church of S. Juliao shows the rich Manueline portico, where figures engraved into the stone for about 500 years observed daily sale of handicrafts. In this neighborhood you can also get an interesting and beautiful panoramic view of the bay.

Troino
Opposite the Historical Center, beyond the Convent of Jesus, is the Troino neighborhood. Due to the earthquake 1755 and with the reconstruction pombalina, the streets are not as winding as in Fontainhas. Nevertheless, the neighborhood spirit remains strong, with terraces and typical cafes serving as meeting points. In the narrow sidewalks, small grills aromatize the streets with the smells of delicious grilled fish that gives fame to Setubal. A few yards away, already at the Plaza Teofilo Braga, is the elegant Sapal Fountain, in Baroque style.

There is plenty to do in the area, especially if you enjoy the outdoors. One of the most popular is a visit to the Troia Peninsula. Catch the ferry to the beautiful Troia Peninsula and its paradise beaches. From the harbor, after passing in front of Troia's upmarket flats, restaurants and casino, the visitor is led onto a stilted walkway which winds its way to the beaches facing west onto the Atlantic. There are one or two companies offering trips to view the local dolphins.

Here are more great ideas for exciting things to do in Setubal. Hike up to the Fortaleza de Sao Filipe fort with to experience amazing panoramic views over the city. Visit the Mercado do Livramento, which is considered as one of the best food market in Portugal. Wander the cobbled streets of the pretty old town. Drive the along the dramatic Estrada de Escarpa road as it crosses the Serra da Arrabida. Go wine tasting at one of the Muscatel vineyards in Azeitao. Relax on Praia do Creiro beach with its turquoise waters, golden sand and stunning natural scenery. For a little more adventure, hike or cycle along the challenging routes of the Serra da Arrabida.

The Setubal peninsula is a true sanctuary of knowledge and flavors, where the gastronomic secrets are shared in every corner and the relationship with the sea is expressed everywhere and the relationship with the sea is expressed everywhere. The best restaurants are said to lie on the seafront near the fishing port at the western end of town. Local delicacies include Choco Frito (fried cuttlefish) and grilled Salmonette, a pink river-fish highly prized by the locals. Thereâs no better way to toast to the enviable varied gastronomy in Setubal region than with a good wine. With a microclimate that favors either the cultivation of the vine or the production of fine nectars, Setubal offers quality wines awarded in the four corners of the World. With floral aromas in whites, the soft flavors of spices and wild fruit in reds and the diversity of flavors of the famous Moscatel de Setubal, the wines of the region transport you to a universe of sensations in a county blessed by nature.

The closest airport to get into Setubal is Lisbon International Airport. You can access Setubal using the Fertagus train, departing from Lisbon's railway stations every hour (off-peak hours) or every half hour (peak hours). The journey lasts around fifty minutes and ends at Setubal central station. There are buses that serve from Lisbon to Setubal every day and almost every hour a day, if you're in the capital it won't be a problem. There are also buses that serve the surrounding area towns. Getting around won't be a problem in Setubal. The whole central part of the city is not that huge and you can just walk to everywhere. Buses serve the whole town and are generally good on schedules and quality. Taxis and Ubers also serve the city with good coverage. You can also easily get there and around with a rental car if you prefer your own schedule.