How much does it cost to travel to Braga?

How much money will you need for your trip to Braga? You should plan to spend around €90 ($102) per day on your vacation in Braga, which is the average daily price based on the expenses of other visitors. Past travelers have spent, on average, €32 ($37) on meals for one day and €16 ($18) on local transportation. Also, the average hotel price in Braga for a couple is €86 ($98). So, a trip to Braga for two people for one week costs on average €1,258 ($1,427). All of these average travel prices have been collected from other travelers to help you plan your own travel budget.

A vacation to Braga for one week usually costs around €629 for one person. So, a trip to Braga for two people costs around €1,258 for one week. A trip for two weeks for two people costs €2,516 in Braga. If you're traveling as a family of three or four people, the price person often goes down because kid's tickets are cheaper and hotel rooms can be shared. If you travel slower over a longer period of time then your daily budget will also go down. Two people traveling together for one month in Braga can often have a lower daily budget per person than one person traveling alone for one week.


How expensive is Braga? How much money do I need for Braga?

How much does a trip to Braga cost? Is Braga expensive? The average Braga trip cost is broken down by category here. All of these Braga prices are calculated from the budgets of real travelers.

How much do vacation rentals cost in Braga? Prices vary by location, date, size of the place, and the level of luxury. See below for options.

How much does it cost to go to Braga? Naturally, it depends on the dates. We recommend Kayak because they can find the best deals across all airlines.

The price of renting a car in Braga will depends on dates, the type of car, the location, and your age. We recommend Kayak because they can find the best deals across all car rental companies.

Braga On a Budget 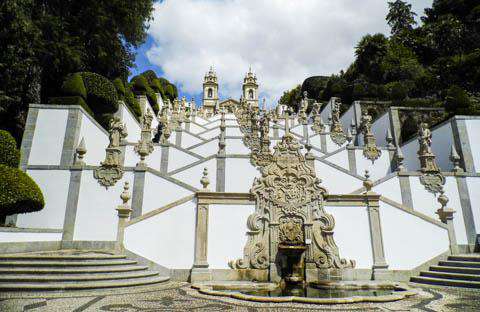 Braga, Portugal
Located in the Cavado Valley of Northern Portugal, Braga is a medium sized city with both historical and modern characteristics. There is a university in town, known as Universidade do Minho, which gives the city a young feel with a lot of life. There are also many bars, clubs, and activities around to keep you entertained.

The city has a Mediterranean climate that is similar to that found in other cities in the northwest Iberian Peninsula. Summer temperatures can be hotter than you might expect though, as the city is not that close to the ocean. In general, the weather is quite pleasant and there are clear seasons throughout the year. Rain is most common during the fall, winter and spring seasons.

There are a handful of sights throughout the city, including cathedrals, museums, and the fascinating Tree of Life Chapel. This chapel is made with 20 tons of wood, but not a single nail or piece of metal. It's truly fascinating to see. It is also worth doing a trip to the nearby Nacional Park of Peneda-Gerez.

There are also many interesting archaeological and cultural sights within the area. Arch of Porta Nova is on the western gate of the medieval wall. The Castle of Braga was constructed during the reign of King Denis of Portugal. It played an important role in the defense of the city and included a semi-circular walled enclosure and the Se Cathedral. Squares worth visiting include Municipal Square, Paco Square, Conde Agrolongo Square, and Santiago Square. Also visit the Archbishop's Palace of Braga, Born Jesus, and the Biscainhos Museum.

Braga has many monuments and architectual sights spread throughout its city center. Around the university area, which is on the eastern side of the town, you will find many affordable restaurants, bars and clubs. Interesting squares include Municipal Square, Paco Square, Conde Agrolongo Square, and Santiago Square.

The city's nightlife is somewhat limited, particularly on weekdays when many of the clubs are closed. Most are only open on weekends and Wednesdays, which is "academic night", when many students go out. There are some interesting small bars around the historic city center that are worth checking out, so ask a local where the best place to go is. Do keep your wits about you at night as the city center is best not explored alone in the late evening.

The food in Braga is actually quite diverse and delicious. There are a good number of affordable restaurants around town. If you're on a tight budget, the best area to find good, cheap food is by the University Campus, which is on the eastern side of town. In this area you'll find plenty of restaurants that cater to students.

There are many regional and local specialties. The dishes are influenced by the diverse natural landscape of the area. Some of these specialties include potato and cabbage broth, a type of corn bread that is made with maize, and roasted meats. Common meats range from pork to fish, including cod or trout. Other dishes are common such as duck rice and local ham. In general, the meals are typically filling and delicious.

For traditional food try Panoramic Restaurant at Hotel do Elevador. It has good food and a great view of the city.

There is a nearby airfield in Palmeira, but the principal airport for the city is actually about 50 kilometers away in Porto. You can reach the city center by bus or regional high speed rail, which connects Braga with other major cities. The city is easily accessible by train, but once you arrive you will find that the train station is a little outside of town. You can make your way into the city center from this train station by either bus or taxi. Alternatively, instead of taking the train, it is typically cheaper and faster to reach Braga by bus.

To get around Braga there is a decent bus system. Although public transit here is not as established as in some other Portuguese cities, it is still relatively efficient and your best means of transportation aside from walking.

50 things you need to know to travel to Portugal


Train and Bus Prices
The best prices for buses and trains in Portugal can be found on Omio (formerly GoEuro). They let you search across all train, bus, and plane routes throughout the region.

By backpackguru in Food
Because of the university in town, as well as the rural landscape nearby, there are many diverse local specialties you can find in restaurants around town. The dishes range from simple and basic to quiet complex and impressive. You can have homemade bread with maize, roasted pork, cod, trout, and octopus. There also a local chicken and rice dish known as pica no chao as well as a similar duck rice dish. If you're feeling exotic you can try a meal made from young goat, baked heifer, or local hams.