Should you visit Guatemala City or Santa Elena?

Should I visit Guatemala City or Santa Elena? This is a common question asked by many travelers. By figuring out which city is more affordable, you'll understand where you can get more bang for your buck. So, let's dive into the data, which all comes from actual travelers.

Santa Elena is a cute town, and the closest to the Monteverde Cloud Forest. It's one of the most popular destinations in Costa Rica, and is a great place to experience the cloud forest and see some of country's unique wildlife.

In the Monteverde Cloud Forest you have a good chance of seeing rare quetzals which are the national bird of Costa Rica. Other common animals include white-faced capuchin monkeys, howler monkeys, orange-kneed tarantulas, any of 8-9 species of hummingbirds, and sloth.

Santa Elena is about 1,400 meters above sea level and has a humid and damp environment. The average yearly temperature is 64 degrees Fahrenheit and the average rainfall is 3,000 millimetres. Humidity can be anywhere between 74% and 97%.

Which city is cheaper, Santa Elena or Guatemala City?

The average daily cost (per person) in Guatemala City is $36, while the average daily cost in Santa Elena is $61. These costs include accommodation (assuming double occupancy, so the traveler is sharing the room), food, transportation, and entertainment. While every person is different, these costs are an average of past travelers in each city. Below is a breakdown of travel costs for Guatemala City and Santa Elena in more detail.

For a normal double-occupancy room in Santa Elena, $72 is the average cost for a hotel room. Also in Santa Elena, the typical price for a place to stay for one person is $36, such as in a hostel.

Santa Elena food costs typically run travelers around $16 per day. Eating every meal in a nicer restaurant will drive the cost up, and grabbing fast food or casual meals will help you save money.

Also for Santa Elena, here are a few examples of actual transportation services:

Sightseeing, admission tickets, things to do, and other entertainment expenses in Santa Elena can vary widely by price. On average, visitors spend around $20 per person, per day on entertainment and sightseeing here.

Tours and Activities in Santa Elena

Also, here are some specific examples of entertainment, tickets, and activities for Santa Elena.

The average person spends about $5.50 on alcoholic beverages in Guatemala City per day. The more you spend on alcohol, the more fun you might be having despite your higher budget.

Alcoholic beverages can often be a significant portion of a traveler's budget, and the costs can vary greatly from person to person. In Santa Elena, the average amount that a visitor spends on alcoholic beverages per day is $4.08. 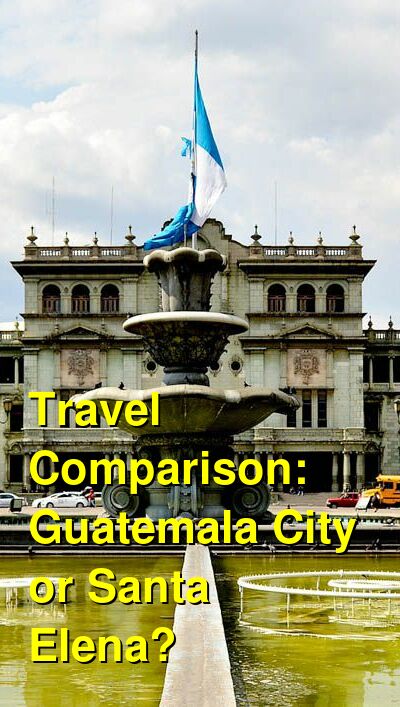