Should you visit Hiroshima or Shiretoko National Park?

Trying to figure out where to travel next? This travel cost comparison between Hiroshima and Shiretoko National Park can help. For many travelers, the cost of a destination is a primary consideration when choosing where to go.

Shiretoko National Park, Japan is comprises the entire Shiretoko Penninusla in the northeast island of Hokkaido. This UNESCO World Heritage Site is considered to be one of the most remote areas in Japan with very few and very small settlements. This makes Shiretoko the perfect place for a fun hiking and camping adventure.

While the park is open year round, the weather in the area tends to greatly affect the enjoyment of your trip due to harsh winters and heavy rain at the end of summer. There is a short period from May to early July that is considered the best time to visit due to slightly less rain and comfortable temperatures around 65 degrees Fahrenheit.

Which city is cheaper, Shiretoko National Park or Hiroshima?

The average daily cost (per person) in Hiroshima is $112, while the average daily cost in Shiretoko National Park is $83. These costs include accommodation (assuming double occupancy, so the traveler is sharing the room), food, transportation, and entertainment. While every person is different, these costs are an average of past travelers in each city. Below is a breakdown of travel costs for Hiroshima and Shiretoko National Park in more detail.

Travelers usually pay around $142 for a double occupancy room in Hiroshima If you want to be in a premiere location or have high end amenities, you can expect to pay a bit more.

A hotel room in Shiretoko National Park is about $72 This assumes double occupancy and modest accommodations.

In Hiroshima travelers spend around $32 a day on food. You can save money by choosing casual restaurants or food stalls, or you can spend plenty more by dining in nicer restaurants at every meal.

The average traveler spends about $28 per day in Shiretoko National Park for food, but obviously this is dependent on the type of restaurant and the amount of food ordered. To save money you can grab a lighter lunch or dinner, or you can try fast food or street food.

While taxis and private drivers typically cost much more than public transportation, people usually spend around $29 per day to get around in Shiretoko National Park.

In Hiroshima, the costs for things to do, activities, admission tickets, and other sightseeing expenses are on average $5.99 per person, per day.

Activities, things to do, and other forms of entertainment usually cost around $16 per person, per day in Shiretoko National Park. This cost includes the price of admission tickets to attractions and museums as well as daily tours.

The average person spends about $11 on alcoholic beverages in Shiretoko National Park per day. The more you spend on alcohol, the more fun you might be having despite your higher budget. 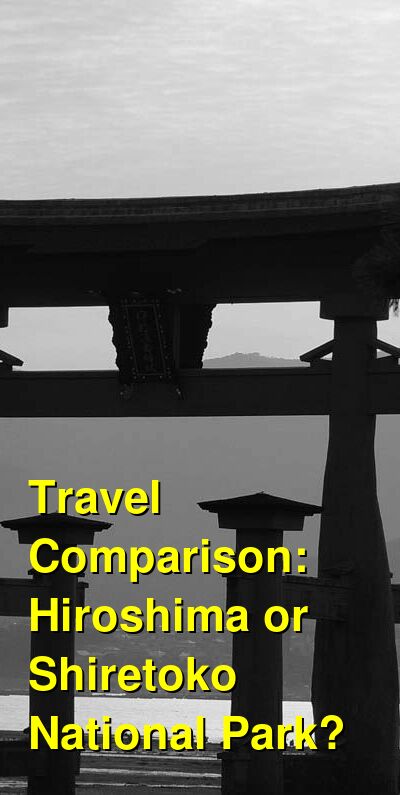