How much does it cost to travel to Kanazawa?

How much money will you need for your trip to Kanazawa? You should plan to spend around ¥12,648 ($123) per day on your vacation in Kanazawa, which is the average daily price based on the expenses of other visitors. Past travelers have spent, on average, ¥3,943 ($38) on meals for one day and ¥1,143 ($11) on local transportation. Also, the average hotel price in Kanazawa for a couple is ¥15,670 ($152). So, a trip to Kanazawa for two people for one week costs on average ¥177,074 ($1,715). All of these average travel prices have been collected from other travelers to help you plan your own travel budget.

A vacation to Kanazawa for one week usually costs around ¥88,537 for one person. So, a trip to Kanazawa for two people costs around ¥177,074 for one week. A trip for two weeks for two people costs ¥354,147 in Kanazawa. If you're traveling as a family of three or four people, the price person often goes down because kid's tickets are cheaper and hotel rooms can be shared. If you travel slower over a longer period of time then your daily budget will also go down. Two people traveling together for one month in Kanazawa can often have a lower daily budget per person than one person traveling alone for one week.


How expensive is Kanazawa? How much money do I need for Kanazawa?

How much does a trip to Kanazawa cost? Is Kanazawa expensive? The average Kanazawa trip cost is broken down by category here. All of these Kanazawa prices are calculated from the budgets of real travelers.

Find a hostel, guesthouse, or B&B in Kanazawa

How much does it cost to go to Kanazawa? Naturally, it depends on the dates. We recommend SkyScanner because they can find the best deals across all airlines.

The price of renting a car in Kanazawa will depends on dates, the type of car, the location, and your age. We recommend SkyScanner because they can find the best deals across all car rental companies.

Kanazawa On a Budget

Kanazawa, Japan
An important city of the Edo-period, Kanazawa is a well preserved city from a time when samurai, merchants, geisha, and lords made up the core of its culture. Though it is often overlooked by foreigners, the city is a gem of Japanese tourism with a number of preserved historic districts, temples, regional handicrafts, art museums, and some of the best food to be had in Japan.

One of the most famous sights in Kanazawa is the Kenroku-en Garden. As the historic pleasure garden of the Maeda Lords, the place represents one of the peaks of Japanese strolling garden design. There are a number of beautiful streams and ponds as well as the Seisonkaku Villa, which, though only part remains, stands as an example of daimyo palace architecture. The Kanazawa Castle Site is another important location. Now a public space with a number of traditional buildings (dating back over 400 years), the site has been under reconstruction. It is located near the Nagamachi Samurai District (more on that under Neighborhoods).

Temples and shrines are also abundant throughout the city. The Ninja Temple, for example, is named so for its impressive array of defensive features like hidden tunnels, secret rooms, traps, and a labyrinth of corridors and staircases. Oyama Shrine is another important site, dedicated to the former local lord Maeda Toshiie. It is known for its unique gate with stained-glass windows that fuse elements of eastern and western cultures.

Throughout Kanazawa, there are a number of districts important to the city's history and culture. Some of these include the city's three Chaya (or teahouse) districts, where guests are entertained by geisha who perform song and dance at the Chaya restaurants. Higashi Chayagai (Eastern Chaya District), Nishi Chayagai (Western Chaya District) and Kazuemachi are Kanazawa's preserved Chaya districts. The Higashi Chaya District is the largest and most interesting of the three with two Chaya open to the public (Shima Teahouse and Kaikaro Teahouse), as well as many cafés and shops, including one that specializes in gold leaf. Nagamachi is another important district where the samurai used to live. One of the main attractions of the district is the centrally located Nomura-ke, a restored samurai residence displaying the lifestyle and artifacts of the era when samurai were prosperous. And then there is the Omicho Market, a network of covered streets lined by about 200 shops and stalls. In addition to fresh seafood and produce, there are many other items on sale from clothing to kitchen tools, as well as great places to have lunch just outside.

Kanazawa is a place to get lost in history and culture. Once you've explored the historic sites, gardens, temples and markets, there is yet more to be seen in the city's museums. If you want to take a step back into the modern world, visit the 21st Century Museum of Contemporary Art. One of Japan's most popular art museums, it exhibits works of acclaimed contemporary artists from Japan and all over the world. The D.T. Suzuki Museum is another popular attraction, commemorating the life and works of Suzuki Daisetz Teitaro, a prominent Buddhist philosopher. Other museums include Ishikawa Prefectural Museum for Traditional Products and Crafts, Morihachi Sweets Shop and Wooden Mold museum, and the Kanazawa Museum of Modern Literature.

Beyond all this, Kanazawa also holds annual festivals and events, like fireworks in the summer by the river bank. Others include the Asanogawa Riverside Garden Party amongst the cherry blossoms of April, as well as the Hyakuman-goku Festival held in the first weekend of June. The city's largest festival, it celebrates the entry of Lord Maeda Toshiie, founder of the Kaga Domain, into Kanazawa Castle in 1583 and the following 3 centuries of prosperity. Festivities include a Saturday parade, folk dancing competition, public tea ceremony, and a children's lantern parade.

Kanazawa cuisine is renowned throughout Japan, especially the seafood, as the city lies in a spot where hot south and cold north currents meet in the Sea of Japan. Sushi, of course, is a popular item year round, while crab dishes like snow crab and kobako crab are staples in the winter. Jibuni is a local soy sauce-based dish that incorporates seasoned duck and vegetables, Kanazawa curry and rice is served with tonkatsu (breaded pork cutlet) and shredded cabbage, and Kabura-zushi is a kind of sushi cake made with cured yellowtail, carrots and seaweed between thin sliced turnips. As far as dessert goes, fuku-ume is a specialty for the New Year-with flavors and textures of thin rice wafer and red bean jam. It has a Japanese apricot shape as the fruit is a symbol for any favorable occasion. And of course, there is Japanese sake-an alcoholic beverage made from water and rice. Since Kanazawa is capital of the Ishikawa prefecture (known for its rice production), the city has a locally made selection known for its flavors and varieties.

The airport serving Kanazawa is in the city of Komatsu. JAL and ANA operate several flights per day between Tokyo's Haneda Airport and Komatsu Airport, taking about an hour's flight.

From the airport, you can take a 40-minute bus to Kanazawa or you could take a bus to the Komatsu station and hop on the JR train from there. By train from Tokyo and other destinations north, take the Hokuriku Shinkansen.

By car, Kanazawa is served by the Hokuriku Expressway which runs through the western edge of the city. 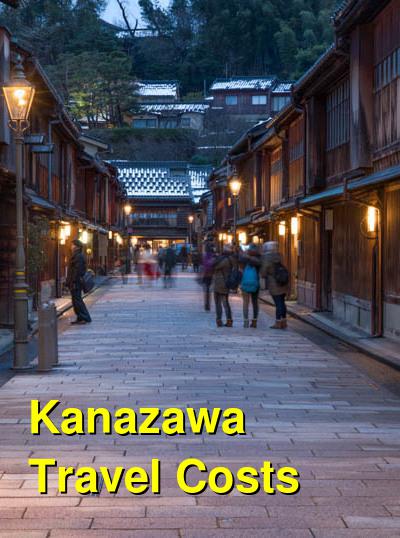 By backpackguru in Entertainment
There are a good number of sites worth visiting in Kanazawa. A few to consider include:

Kenroku-en Park, which is a Japanese style garden. It's well kept, and very styled.

Myoryuji-Tempel' is a fascinating old temple with hidden walkways. You do have to book ahead of time to get in.

There's an old neighborhood in traditional style with many shops, restaurants and cafes.

The fishmarket is a great place to wander through. Check out the prices for the king crabs and some of the fish.